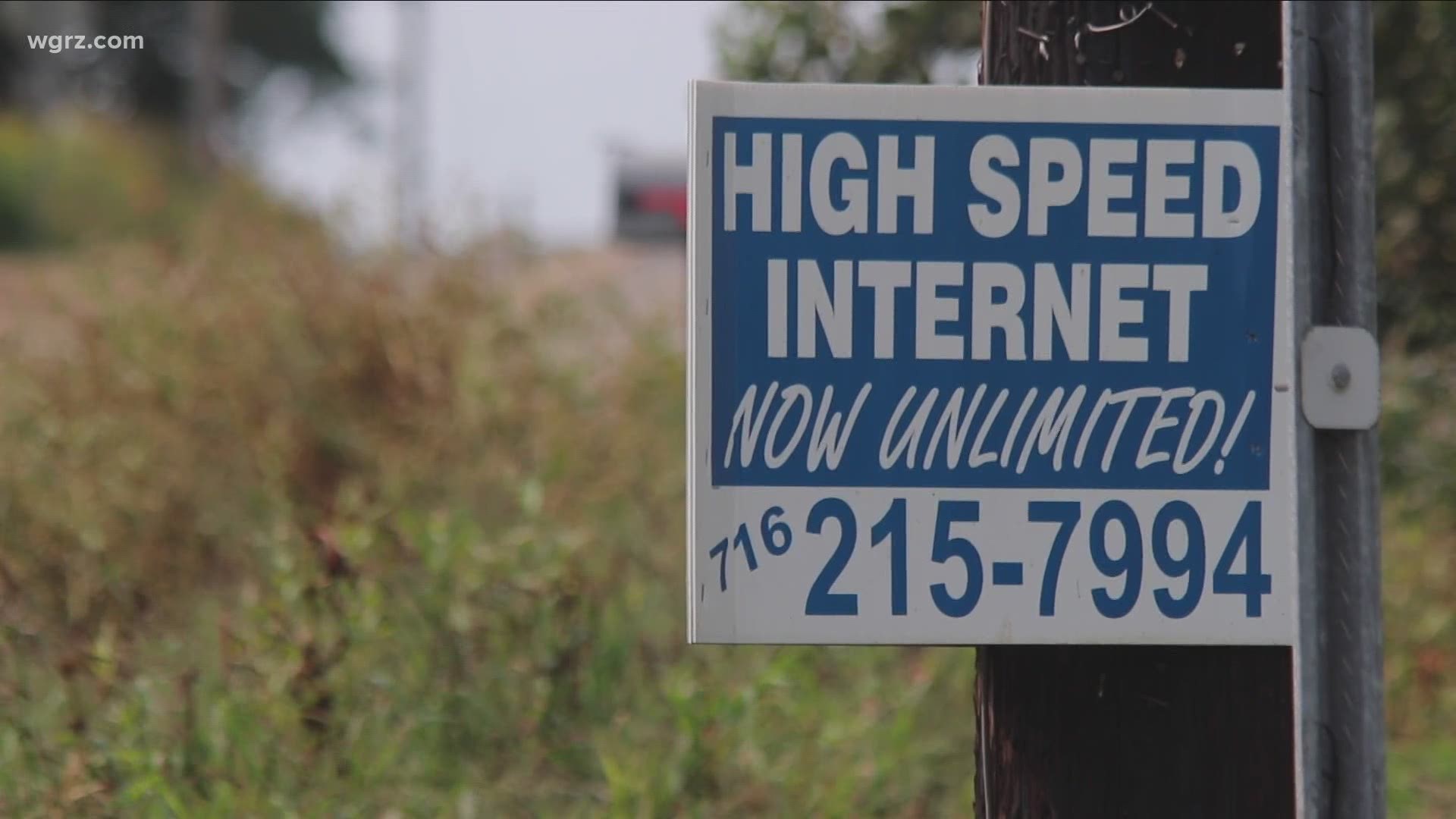 A source with knowledge of the investigation tells WGRZ that the audit began in March. The audit stemmed from complaints submitted by residents across the state and lawmakers who said the program hasn’t delivered on the promises it made.

WGRZ reached out to the Broadband Program Office for comment but have yet to receive a response in regards to the audit.

NYS Comptroller Thomas DiNapolli’s office couldn't comment directly on the audit when asked about it by WGRZ. A source says that audits of Empire State Development programs are fairly regular by the comptroller, but the heightened gaps in broadband availability due to the pandemic have made the audit important to conduct.

The audit is looking at whether the NYS Broadband Program has established measures to ensure controls are in place to monitor service, measure success, and ensure the program is on budget.

NY State initially set aside $500 million for the program that would deliver 100Mbps internet to the entire state, and 25Mbps to “the most rural parts of the state,” according to what Governor Cuomo pitched.

"Most rural parts of the state" have never been defined by the Broadband Program Office despite repeated inquires.

When the program launched in 2015 the Governor also said there would be a dollar for dollar match between the state and companies awarded contracts to build out the infrastructure for this program.

According to the data provided on the Broadband Program Office website, very few private investments have come close to matching the state investments.

Out of 53 broadband projects awarded, only 4 of them matched or exceeded state investment.

A further breakdown of the contracts awarded shows that the state focused on addressing a set number of units, or census blocks, to connect. Approximately 256,000 “units” in New York were scheduled to be connected to high-speed broadband.

76,000 “units,” however, were connected with satellite internet - 30% of the units addressed in total for the program.

A spokesperson from the Broadband Program Office told WGRZ in recent weeks that they ensured these "units" were connected with what they called “enhanced satellite service” with a connection of at least 25Mbps. But the spokesperson wouldn’t comment on why 30% of the units addressed in the program went to a satellite company rather than a provider that offered a fiber-to-the-home solution.

There are several promises that were made public for the broadband program that have been overlooked, ignored, or forgotten about.

When pitching another round of awards for the program in Buffalo on August 6, 2016, Governor Cuomo said 57% of Erie County didn’t have broadband access and that it would be a priority to get residents connected.

“Erie County has been prioritized for the first year,” Governor Cuomo said. “So here's going to be a big burst of energy and activity over this first year, which will get many homes done.”

In reality, according to the data provided on the NYSBP website, only 1,910 “units” were connected through the program - and 1,811 of those units were connected with satellite internet service.

At that same press conference, Governor Cuomo reiterated the goal of achieving statewide broadband coverage by the end of 2018.

“So we get it to every household, all across the state, we get it done by 2018,” the Governor said to a full room.

This goal was established at the onset of the program in 2015, statewide connection by the end of 2018.

“January 1, 2019, the end of the next four years, you will see that every business in the in this state is connected,” Lt. Governor Kathy Hochul said at the announcement of the program on January 16, 2015.

As we’ve reported and highlighted throughout the pandemic, there are still large swathes of Western New York and the rest of the state that lack adequate coverage, if any coverage at all. Several projects remain incomplete according to progress reports from the Broadband Program Office.

According to one project manager, multiple companies had projects that were slowed down due to slow response for permits at the state level, and unwillingness from utility companies to update poles needed for expanded infrastructure.

As recently as July, Lt. Governor Kathy Hochul made the claim that 98% of New York had access to high-speed broadband, though an audit of the program should paint a better picture of what reality New York is currently living in - a connected one or not.

In 2019 Microsoft released data that suggest at least 9 million New York residents are not using the internet at FCC defined broadband speeds, 25Mbps, and 697,000 of those people live in the 8 counties of Western New York.

The New York State Broadband Program Office has also not commented on this data from Microsoft.