Many districts are sending letters to parents, telling students to assemble peacefully and not to walk out of school - and that if they do, they could be disciplined. 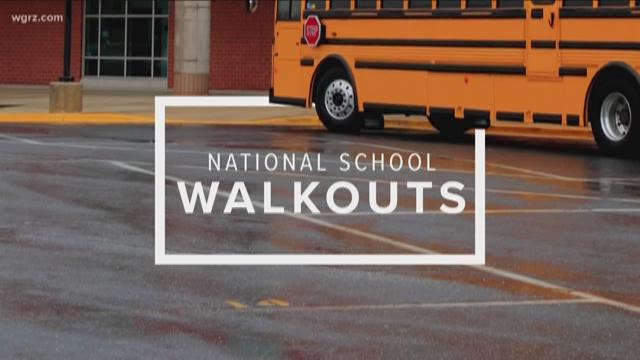 BUFFALO, NY - Students around the country are planning to walk out of classes Wednesday, in a demonstration over guns and school safety.

Some Western New York students plan to join them.

Many districts are sending letters to parents, telling students to assemble peacefully and not to walk out of school, and that if they do, they could be disciplined. A lot of them are allowing some form of protest or remembrance of the 17 victims of the Parkland, Florida shooting.

Niagara Falls, Lew-Port, Williamsville, and Cheektowaga Central, are just some of the schools we've heard from that are allowing walkouts by high school students.

However, many districts say they've spoken to students in middle schools and elementary schools and will either have a moment of silence, or nothing at all. If any of these students leave school, or leave class when they're not supposed to, they could get anything from a verbal warning to a suspension.

"We're counting on compliance from our students," said Niagara Falls superintendent Mark Laurrie, "if in fact a couple students or a student decides to defy the rules of the school, they'll be treated accordingly with the code of conduct and the discipline that's appropriate for what they do."

The national walkout is scheduled for 10 a.m. Wednesday morning. Students who are walking out of class are being asked to not walk out of school for safety reasons and to gather in the school auditorium, or some other location inside the school to speak.

Students are planning to have moments of silence for the 17 victims. Some will read their names, then they'll go back to class. And while that's happening, teachers will continue to teach for students that don't want to leave the classroom.

In the meantime, there are First Amendment questions we wanted to get answered.

The free speech question we had for legal analyst Paul Cambria is: if tomorrow, students at those middle schools or elementary schools (that are previously believed not to participate in a walkout) decide they want to walkout, should they be allowed to?

Cambria says yes - if the same option was made available to high schoolers, younger students should be allowed to as well.

"If they're going to allow for one segment of the students, the adults, the older ones...they should also do something equally acceptable for the younger students because the First Amendment has no age limit," Cambria said. "There ought to be that outlet and it can be trimmed down depending on the circumstances, there can still be an outlet there should be the ability to have that moment of expression."

Cambria says what students can't do is disrupt school.