The Erie-Niagara School Superintendents Association wants NYS to let school districts know what the plans are for next school year by Friday, June 4. 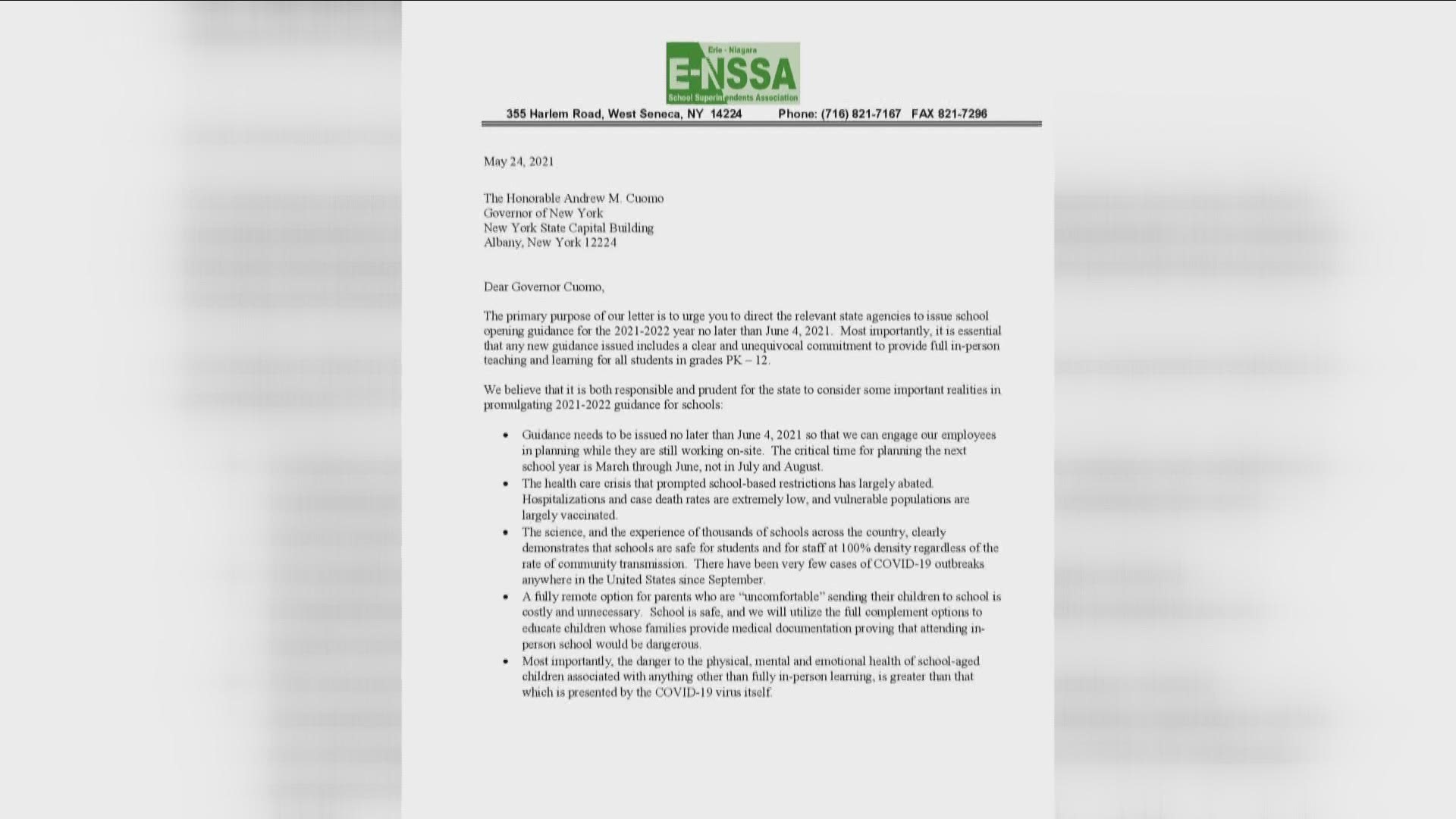 BUFFALO, N.Y. — School superintendents from across Western New York are asking for a plan for next school year from the state by the end of next week.

The superintendents wrote a letter to the state before the Governor announced he'd like students across the state to be back in the classroom in the fall. They would like Governor Cuomo to make solid plans by next Friday.

In it, they ask for clarity no later than June 4 and say the best time to plan for the fall is now when school is still in session.

The president of that group says while they were happy to hear the Governor's sense of optimism about full in-person learning in September, they'd like a commitment with solid guidance.

"To be clear, I'm a school superintendent, you know, it's not for me to give the Governor a deadline," said Superintendent Michael Cornell of the Hamburg Central School District. "What I'm saying to him is it would be preferable for us to have it no later than June 4 because that gives us at least a few weeks with our key people around us so we can work in collaboration with them to take whatever the guidance is and convert it into workable school-based policies that will, you know, help us educate children in the waning days of the pandemic."

They are also asking the state to allow schools to be open at full density with all kids back in the classroom. They want specifics about the cafeteria and the music rooms all spelled out in the guidance. This is all stuff they'd like to plan for now instead of in August.

"If you're planning for September in August or in late July, you're not planning, you're scrambling," Cornell said. "So, that's why we do the planning now when we have our key people around. You know, the only way you take state level guidance and turn it into workable school-based policy is to do it with your staff around you. The people who have to make it work every day, so without them around us, it's very difficult."

As far as masks go, the superintendents are saying that guidance should also be coming from the state.

"My hope is that they provide us with guidance around when masks need to be used and provide us with science to support that because that's obviously a topic parents and kids are concerned about, teachers are worried about it, you know, so we need to be able to have some scientific basis for the policies that we're gonna have to implement consistent with the guidance," Cornell said. "So whatever their position's going to be on masks, it needs to be supported by the science so that we can support it here in our local districts with parents who are going to have questions about it."

Superintendent Cornell says other groups of superintendents across the state have asked the state for the same thing. They would like guidance so they can plan now instead of scrambling right before school starts.