This has been a safety issue 2 On Your Side has been following and asking questions about for years. 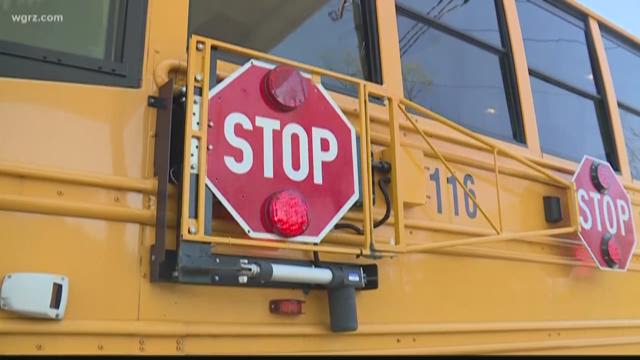 This has been a safety issue 2 On Your Side has been following and asking questions about for years. But, lawmakers in Albany have had concerns about the cost that would be passed onto school districts.

"It continues as a really serious problem," said Peter Mannella, executive director of the New York Association for Pupil Transportation, which has been fighting to get cameras on stop arms for years, to catch violators.

But, lawmakers have had questions about the costs that would fall onto school districts. In Governor Cuomo's proposed budget, school districts would be allowed to install cameras on stop arms.

"This year that's the first time that's ever happened, I think it gains a lot more support or at least less opposition, because it's going to be part of that overall package in the budget someone is going to have to be very focused to say let's take that out," Mannella said.

Also in the budget, fines for illegally passing a school bus would rise. For example, the fine for a first offense would go from between $250 and $400 to between $500 and $750. And, school districts would be allowed to get the fine money.

"I think that's a step in the right direction," said Mark Laurrie, the superintendent of Niagara Falls Schools, "first of all we want to minimize the amount of fines that are given, however, in the case that fines are levied I want that money and the revenue to come to the school district to offset the cost of the cameras."

"In a year where the state is looking at a $4 billion deficit and it's going to affect what they're able to do for municipalities, I think you're going to see this as one way to see some additional revenues go to municipalities," Mannella said.

Politically we've heard from Republicans like State Senator Cathy Young and Democrats like Tim Kennedy who support cameras on stop arms for safety reasons. We'll have to see in the budget negotiations whether cost remains an issue.

Young's office sent us this statement:

"An estimated 50,000 motor vehicles illegally pass New York State school buses every day, endangering the lives of our innocent children. This alarming figure exposes the magnitude of this threat to student safety and indicates that tougher enforcement of the law is critically needed.

I was very encouraged that Governor Cuomo included major elements of my School Bus Camera Safety Act legislation in his proposed budget. Installing cameras on school buses to record violations would be a major deterrent to this behavior. While the Governor's current proposal lacks the start-up funding appropriation that is in my legislation, it is an important step forward and opportunity for further dialogue. I am hopeful that 2018 will be the year that New York takes action to safeguard our precious children from reckless drivers."

According to the superintendent in Niagara Falls, he says he gets a report of a bus being illegally passed at least once a week, and would like have another eye outside the bus.

2 On Your Side also received a statement from the New York School Bus Contractors Association, "[Our organization] supports the Governor's efforts to reduce the threat of drivers who illegally pass a stopped school bus, and we are currently reviewing the specifics regarding Stop Arm Cameras as outlined in his budget proposal," said NYSBCA president Bree Allen. "We want to be certain that the use of Stop Arm Cameras enhances student safety and that their implementation will be effective for both school districts and contractors. We look forward to working with the Governor on these important student safety initiatives to ensure that the yellow school bus remains the safest way for our children to get back and forth to school each day."