Rural broadband: New York still has work to do

Despite claims from the governor, large swaths of New York are underserved or unserved when it comes to high speed broadband. 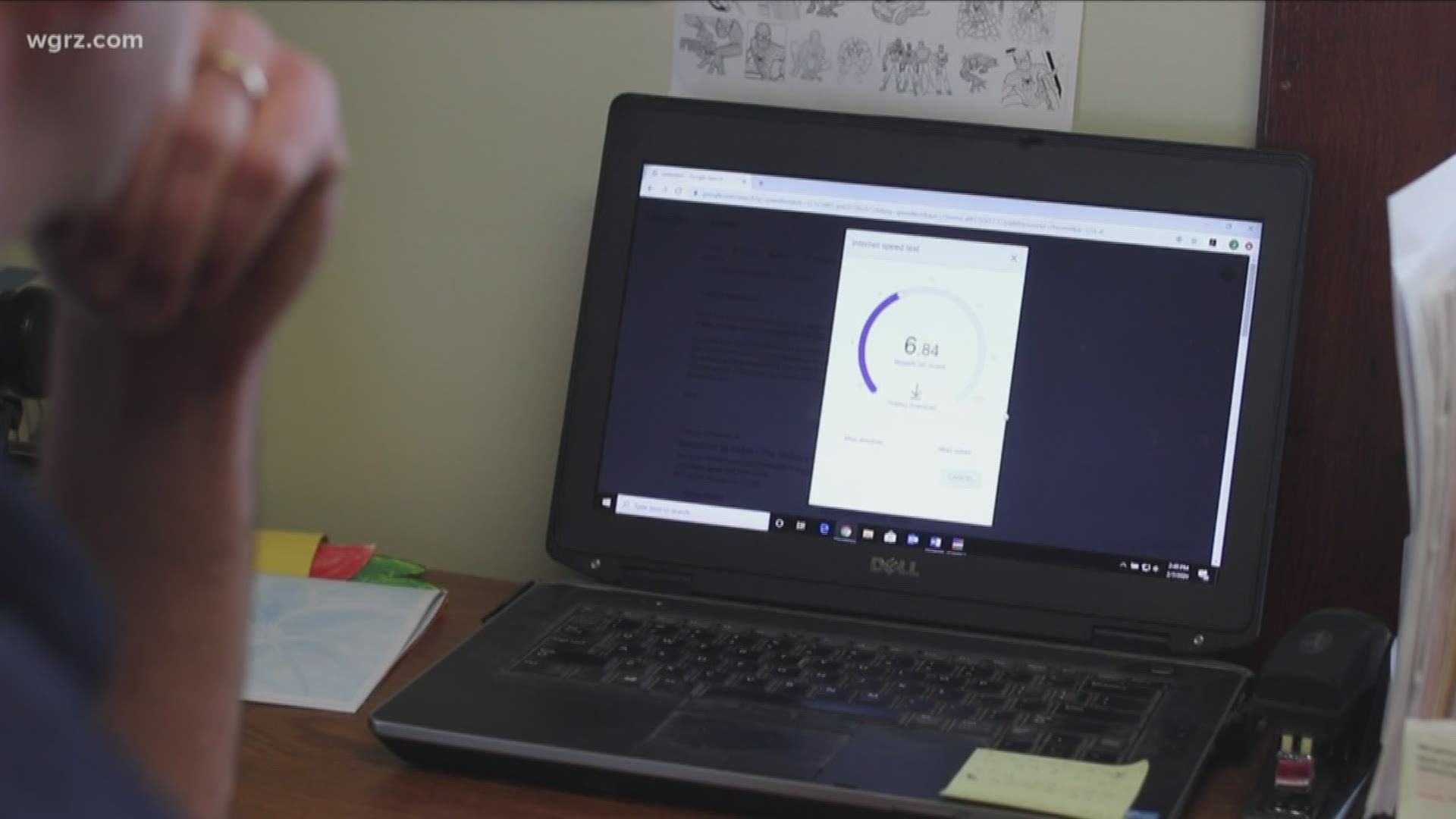 In order to tell this story, we have to go back in time a little bit. In 2016 Governor Cuomo announced a bold proposition.

“We will be the only state in the United States of America to have 100% high-speed coverage in two years."

Governor Cuomo said that at an August 3, 2016, news conference in Buffalo highlighting the goals of the New York Broadband Program. Later that day the governor traveled to Potsdam to continue the announcement, discussing the specifics in more detail.

He again pledged that the project would be completed in two years.

In January of 2018, a month after the self-imposed deadline for New York State Broadband Program projects had passed, the governor announced in Plattsburgh the state was covered with broadband service.

“This is the first state in the United States of America to have 100% internet access for the entire state," he said. "I think that's going to be an incentive for companies all across the world to come to New York." 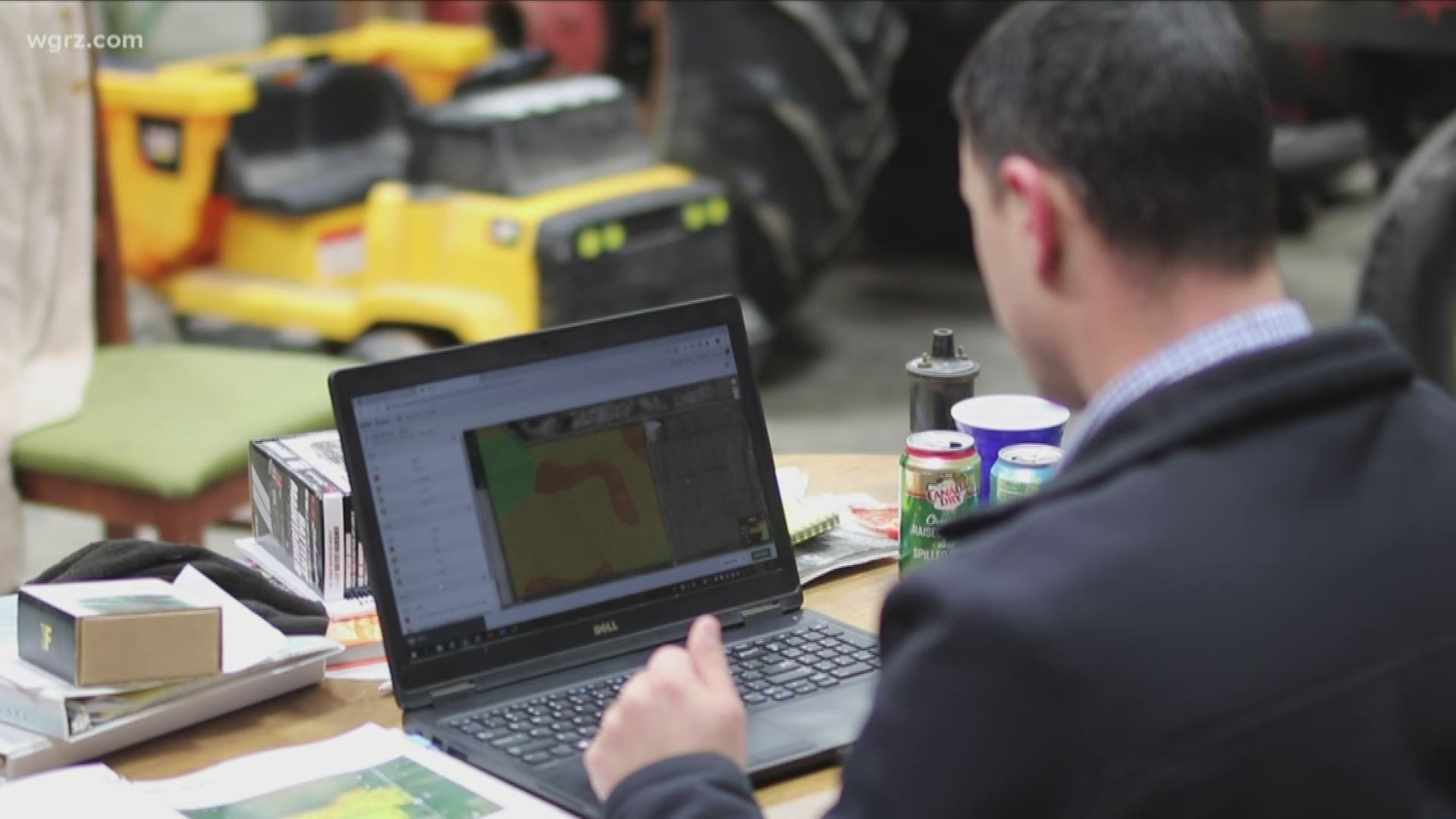 A few weeks ago at his 2020 state of the state address, the governor doubled down on the claim before announcing a plan to bring 100% cell coverage to the state.

“We are already bringing the internet to every corner of upstate," he said.

The New York State Broadband Program is a $500 million program designed to bring broadband access to the unserved and underserved residents of New York State. The project started with RFP’s in 2016 with specific language that stated broadband projects would be completed by December 31, 2018.

The eight counties of Western New York received a combined $81,799,840 of state funding to build out broadband services. The counties were not responsible for doing it, private companies bid on the contracts to do it through the RFP process with the state. 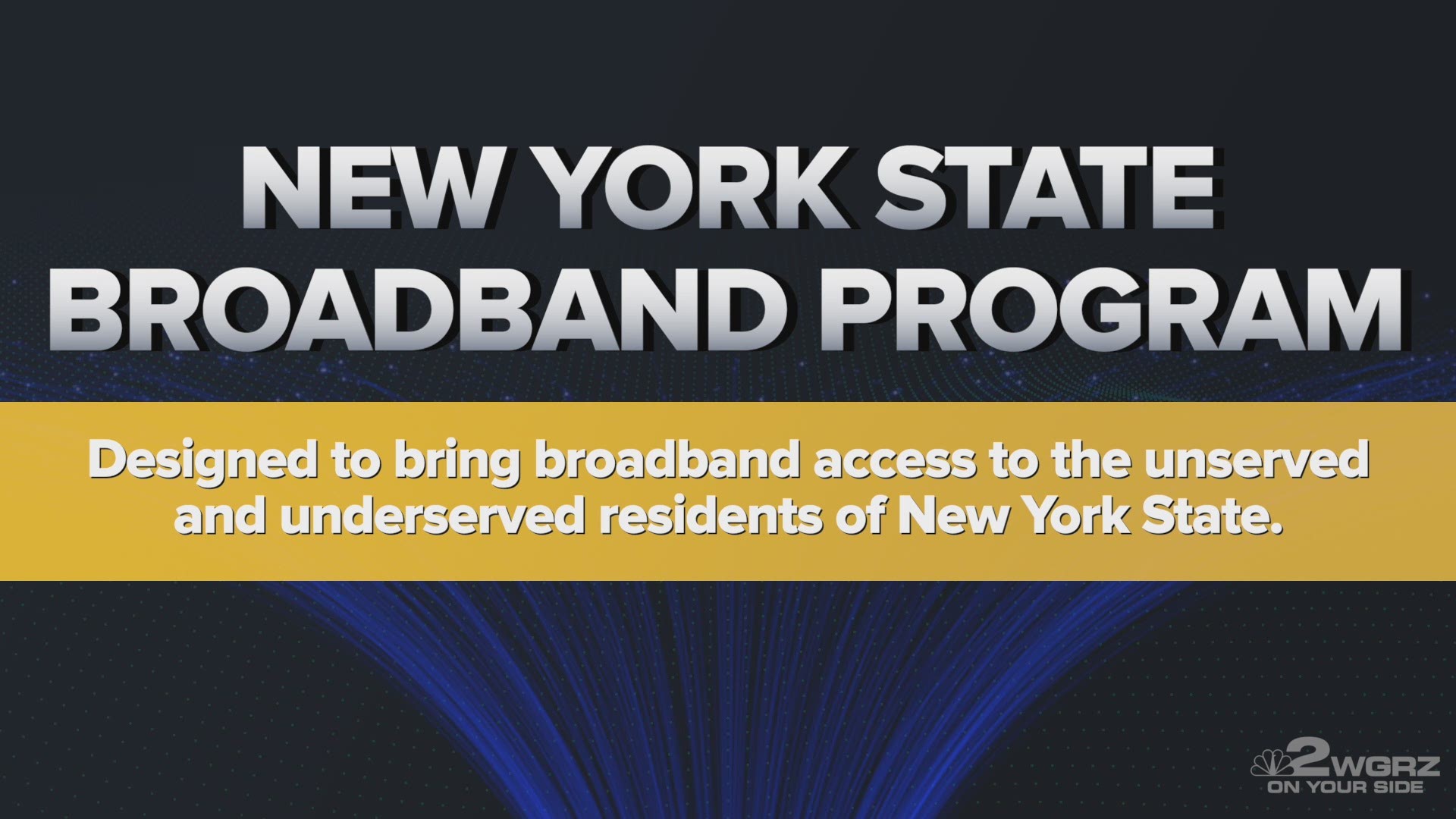 So, is there 100% broadband coverage across New York State?

“No, there are large parts of new york state that are not covered by broadband," Senator Chuck Schumer said at a press event in January when asked by 2 On Your Side

Congressman Brian Higgins, when asked at a January press event,  said the claim that New York has 100% broadband coverage "is not true.”

2 On Your side sat down with Erie County Executive Mark Poloncarz about the topic of broadband access. He says residents and businesses looking to set up in Erie County will have a lack of choice in some areas of the county.

“There are certain locations in Erie County that they'll be like, 'hey, that's great, what can I do with regards to high-speed internet? And the answer is you don't have a whole lot of choice”

New York State Senator Rob Ortt represents Niagara and Orleans County. When asked if the claim the governor made was true, the senator was adamant.

“That is simply just not true. it’s simply not true,” he said.

Niagara County Legislator David Godfrey has been trying to bring county-wide broadband access to the county for over a decade.

“We're probably close to the 10's of thousands between our two (Orleans) counties that are unserved right now,” he said.

Orleans County Legislator Lynn Johnson has been also working to bring broadband to her county and knows the struggles her residents are experiencing.

“We know of those that are underserved and unserved,” Johnson said.

Even the organization that oversees the broadband program, Empire State Development, said in a statement to 2 On Your Side:

"As of February 2020, approximately 2 percent of New Yorkers do not have access to broadband, down from approximately 30 percent in 2015 when the New NY Broadband Program was established by Governor Cuomo.” 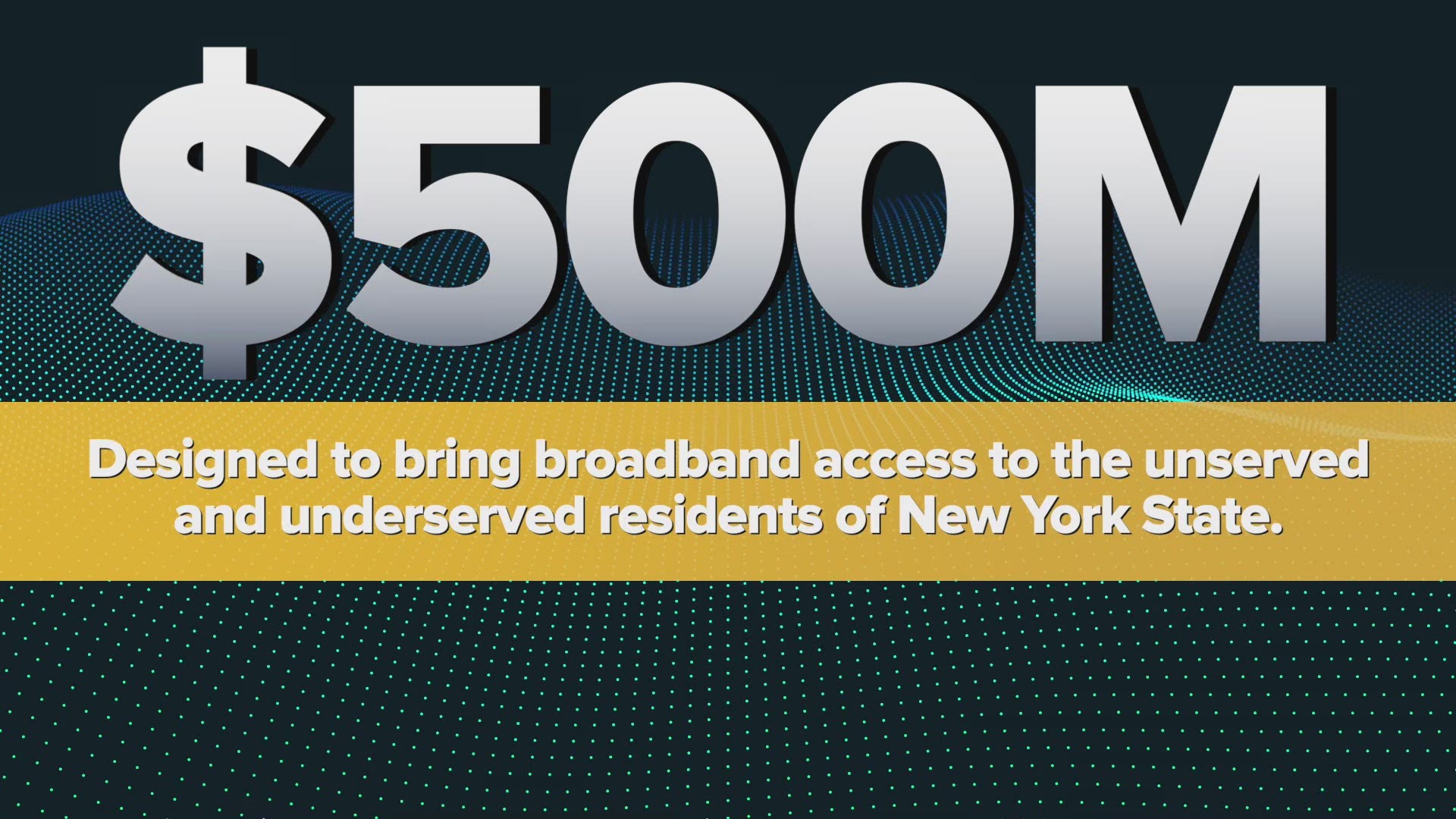 Digging into the data a little deeper shows how complicated it is to count a home as served or not from a broadband standpoint. The FCC uses census blocks as the primary data point for coverage. Within census blocks, there are housing units. If one housing unit within a census block has broadband access, which is defined as 25Mbps down and 3Mbps up, then the census block is declared “served.”

It's entirely possible, and often the case in rural areas, for a census block to be listed as served, when in fact many homes within the block have no broadband connection. This happens along the main thoroughfares in a rural community where the main road might be connected, but interconnecting roads are not.

The most recent data available from the FCC is from May 2019 and was self-reported by service providers and was not independently verified by the FCC. This policy changed in August of 2019, and new data hasn’t been publicly released yet.

The 2019 report says 98.4% of New York State is covered, but if you exclude urban areas and focus on rural areas that number is 87.1%. Governor Cuomo repeatedly said that connecting the unserved and underserved communities was a priority for the program because of the costs involved for the service providers to do it.

"There are some places that are just so rural, and far, that there's no economic reality to doing them," he said in 2016.

That averages to 89.5% of WNY that has coverage. Chautauqua, Erie and Niagara Counties would be lower if some of their urban areas weren't included in those percentages.

If you look at a visualization map of FCC data and select the types of broadband available in New York, you see all blue, 100% coverage:

If you un-check satellite internet as an option, it paints a different picture of available broadband access in New York State:

We unchecked satellite as an option because we saw the internet speeds first hand from multiple users that are using satellite as their only option that doesn’t come close to the FCC broadband definition.

Satellite broadband users we talked to were very candid about their experience with the service.

“These providers charges, an arm, and a leg to get service. And then they don't even give us a good service, that's why I'm angry. That's why I'm frustrated," Katie Ehlers told 2 On Your Side.

Kate Ehlers works in Lackawanna but lives in Franklinville. She has the option to work from home, but the service she has makes her skeptical of being able to conduct business easily.

"I can barely send an email and we're paying $100 or more per month [for satellite internet]," she said.  "It's just so frustrating because I'd like to be able to work from home more, but I just can't, rely on the service and that jeopardizes my job."

John Kast is now running the family farm in Orleans county, Kast Farms. He's in charge of a 5,000-acre farming operation that, at its peak, employs over 100 people in the harvesting season. They use spectrum business-class broadband service. The service advertises speeds in excess of 300Mbps. This speed test he ran paints a different picture.

“It's day-to-day," he said "So there'll be times where everything looks good, and we're working fine, and then connections all down. And we'll have to wait. You know, it might be five minutes, it might be an hour might be a day,”

Kast Farms also has a weather station on one of their fields. This weather station provides constant data to his employees and other farms across the region as part of a crowd-sourced weather network. This network is critical for apple farmers to keep track of weather conditions that might be ripe for scab infections, which if not handled, could decimate an apple crop for an entire year overnight.

"We'll have at least several days during the year where there won't be any data that are collected," he said. "Sometimes we can relate it to a specific incident, you know, but there are other times where, for no rhyme or reason, there just won't be any data going through, and we know it was something having to do with the internet connectivity."

John King works in the ag-tech business primarily in Niagara and Orleans county. He relies on cell data, but also fixed-wire broadband on farms that are extended by repeaters on the rooftops of barns and houses. The data he collects pinpoints to an inch where farmers plant their crops, fertilizer and everything else that puts food on our tables. Combines use the fixed broadband repeaters to transmit that data to the cloud, when it works and if there is service. John showed me multiple maps that had entire fields of data that couldn’t be collected because the broadband signal wasn’t strong enough from the office repeater

"We need something that is 100% there, t that connects these guys all the time, and it's reliable.”

Cameron O’Keefe works in the clean energy sector. She works from home and on the road because her employer allows her to and she travels around WNY counties quite a bit surveying clean energy projects.

"I use GIS software and Google Earth and all these maps that are cut, they need a good connection," she said.  "So sometimes I just can't even load them so I have to go somewhere else.”

None of the people we talked to mentioned Netflix or Hulu or streaming once. They’re trying to work. All they’re guilty of is living in rural Western New York.

“It’s not only my district, it’s happening across large swaths of new york," Senator Rob Ortt said. "A lot of times their only option is only satellite, which they’ve had and is not as reliable as high-speed broadband."

Empire State Development says the majority of NYSBP projects are completed and in "validation" stages. They would not, however, confirm what that percentage is. The agency also wouldn't confirm how many actual residents, not census blocks, remain underserved or unserved. They referred us to the latest FCC data.