A report sent to Channel 2 by the New York State Department of Health shows three counties in Western New York have some of the highest rates of pain pill prescriptions in the State. 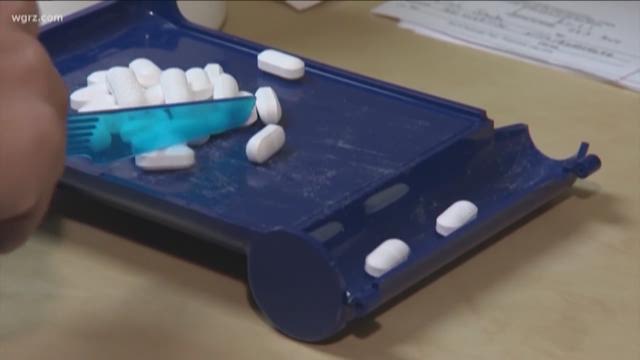 A report sent to 2 On Your Side by the New York State Department of Health shows three counties in Western New York have some of the highest rates in the state, in terms of pain pills being prescribed by doctors.

Dr. Richard Blondell, Vice Chair of Addiction Medicine in the Department of Family Medicine in the Jacobs School of Medicine and Biomedical Sciences at University of Buffalo, says more needs to be done in Western New York to educate doctors about their role in the opioid epidemic.

"You can put a treatment center at every street corner in Buffalo and that's never going to address the problem as long as the healthcare system is continuing to prescribe new patients into addiction," Blondell said.

The numbers in the report also show that the rates are actually higher in rural, less populated areas.

Dr. Blondell says there are reasons rural counties across the state have among the highest rates.

"There aren't many physicians and there are a lot of patients with chronic diseases. Their offices get overwhelmed and sometimes it's just quick and easy to just write that prescription and move onto the next patient."

The numbers in this report are from the New York State Prescription Monitoring Program between 2014 to 2016.

Since Niagara County's numbers were so high, 2 On Your Side reached out to the Niagara County Health Department to find out what's being done about it.

Director of Mental Health and Substance Abuse Laura Kelemen tells 2 On Your Side that the Niagara County Health Department has a number of prevention, awareness, and treatment programs in place. But they're working on a new initiative to get the excess opioids being prescribed out of the local communities.

The plan is to expand the prescription drop box program, to have more boxes in community locations not just law enforcement offices.

"86% of all individuals who end up addicted to heroin started their use through some type of non-medicinal use of prescription medication," explained Kelemen. "So we want people to easily return their medication and dispose of it in a safe manner. But to have those drop boxes available in pharmacies or available through hospitals would be ideal because they need to be available in community locations that people frequent."

Kelemen says funding is an issue, not just for the cost of the containers, but to pay for disposal.

She says Niagara County leaders have already brought this funding request before the state. Kelemen says they've talked about possibly making pharmaceutical companies responsible for some, or all, of those costs.

In light of the recent state figures, Dr, Blondell believes there are at least 5 ways of approaching the problem of over-prescribing pain medication.

"Every epidemic that we've ever had had really basically been addressed with prevention, not treatment. Polio, smallpox, the aids epidemic - you name it. It's always been trying to prevent new cases."

1. Educating doctors about proper use and prescription of medications, how to recognize the early signs of addiction.

New York State, as of 2016, requires that all physicians and opioid prescribers complete continuing education every three years, concerning addiction and pain management.

Dr. Blondell: "They are producing, manufacturing opioids in quantities far in excess of what we really need. Whether that's production quotas, taxing them or whatever we need to do...but we need to reign them in and we need to reign in their advertising and marketing procedures so they stop pushing these drugs."

Dr. Blondell: "These pharmacies are dispensing medications far in excess of what we need. So they have a role to play."

Dr. Blondell: "Patients have to come to expect that we can't relieve all their pain and that doctors are going to have more discretion now with the use of pain medications and we're not going to keep doing what we've always done before."

Dr. Blondell: "This epidemic is being financed with healthcare dollars, Medicare dollars, Medicaid dollars. That's what pays for all these prescriptions. And so insurance companies will pay for huge quantities of opioids, far in excess of what a patient needs and what happens to those opioids is they end up on the street. Have the health insurance companies put some limits on these prescriptions and not just pay for all this stuff."

One positive outlined in the NYSDOH report is that the numbers show overall opioid prescriptions decreased between 2014 and 2016 in almost every New York county, except for St. Lawrence and Essex counties.