A 22-year-old quadriplegic man was removed from a flight because of issues with a chest restraint. 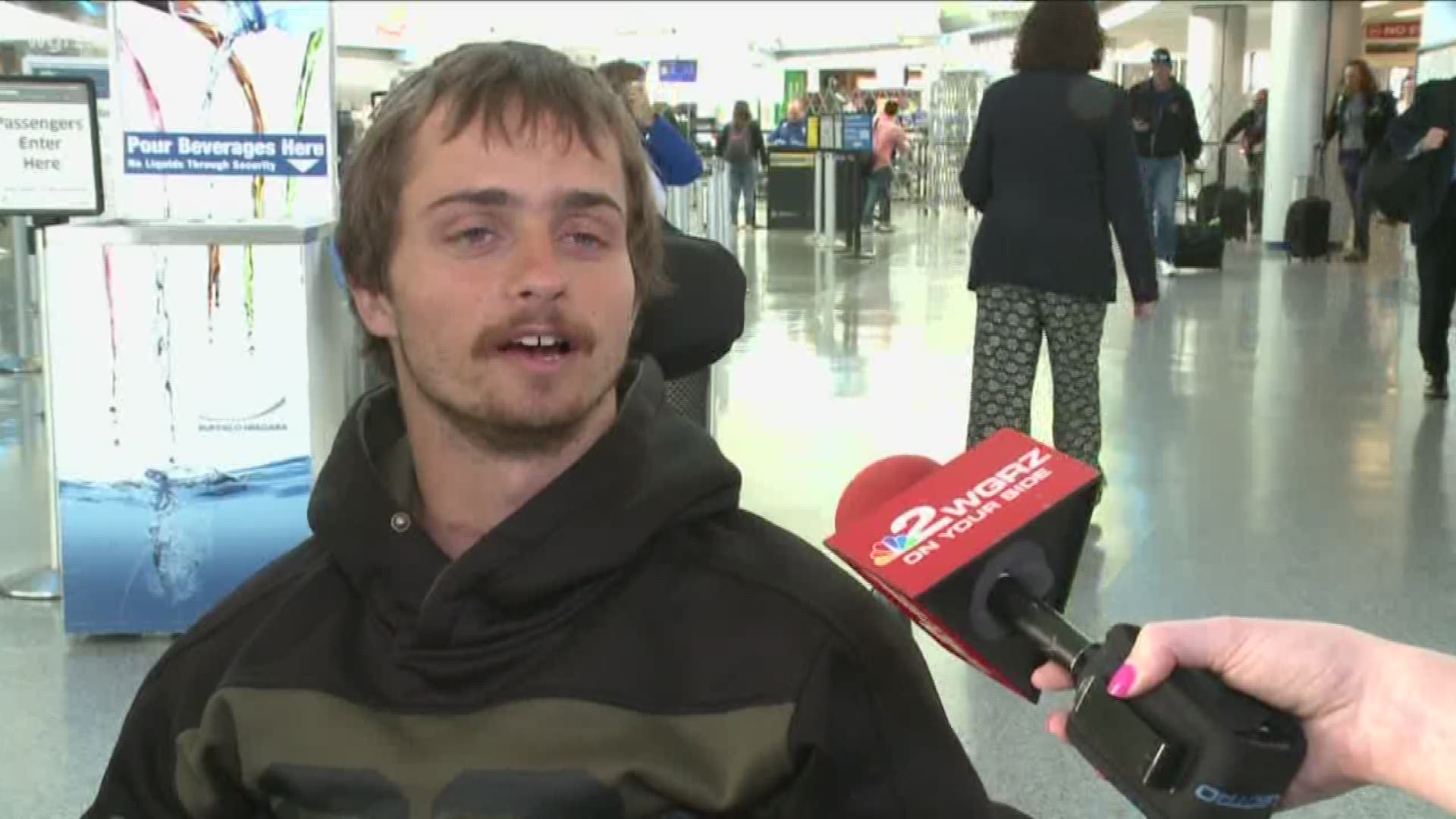 BUFFALO, N.Y. — A 22-year-old man from Western New York is finally home after what he calls a 30-hour nightmare experience.

"I was too shocked, for a captain to treat someone paralyzed that horribly, it's just unacceptable" said Robert Knab.

Robert Knab is a quadriplegic, he was paralyzed from the neck down after a snowboarding accident earlier this year. He and his girlfriend are in the process of moving back to Buffalo. They booked a flight with Frontier Airlines to fly from Denver, C.O. to Buffalo on Sunday.

Robert Knab's wheelchair was loaded and when he boarded the plane, he says flight staff told him that his chest restraint was not sufficient.

"The restraint that he had was from Craig Spinal Cord Institution, which is approved for many flights that he has been on " said Robert Knab's uncle David Knab.

"I was just in disbelief cause I was already sitting on the plane for an hour cause they got me loaded up and I'd been sitting there and now I couldn't even go back to Buffalo just because of a chest restraint that I'm required to have" Robert Knab reflected.

Robert Knab said he was removed from the flight and he and his girlfriend were rebooked on a Southwest Airlines flight on Monday, where he says he was able fly without issue.

"We are reviewing the events on flight 450 from Denver to Buffalo on Sunday and have rebooked two of the passengers involved on another airline to their destination. Safety is our number one priority and passengers who require an orthopedic positioning device must bring their own for travel on Frontier Airlines."

We replied to that statement, asking for further follow-up because Robert did have his own orthopedic positioning device. The airline then released a second statement, an excerpt from their website saying in part:

“Any type of OPD or brace is acceptable if it supports the passenger to sit upright and is not attached directly to the aircraft seat. In addition, the OPD or brace should fit between the armrests in the down position and not infringe on another passenger's seat. Frontier does not provide passengers with OPDs.”

"It’s just a sad thing, a 22-year-old who is paralyzed from the neck down has to go through this type of humiliation " said David Knab.

This is not the first time Frontier Airlines has dealt with a situation like this.

According to a Reuters report, back in 2011 a quadriplegic man was removed from a flight in Dallas because of restraint issues. According to the U.S. Department of Transportation, Frontier Airlines was fined $50,000 in that case.

Robert Knab and his family say they just don't want this to happen to anyone else.

"We can’t make life any more difficult for them then what they already have" said David Knab.