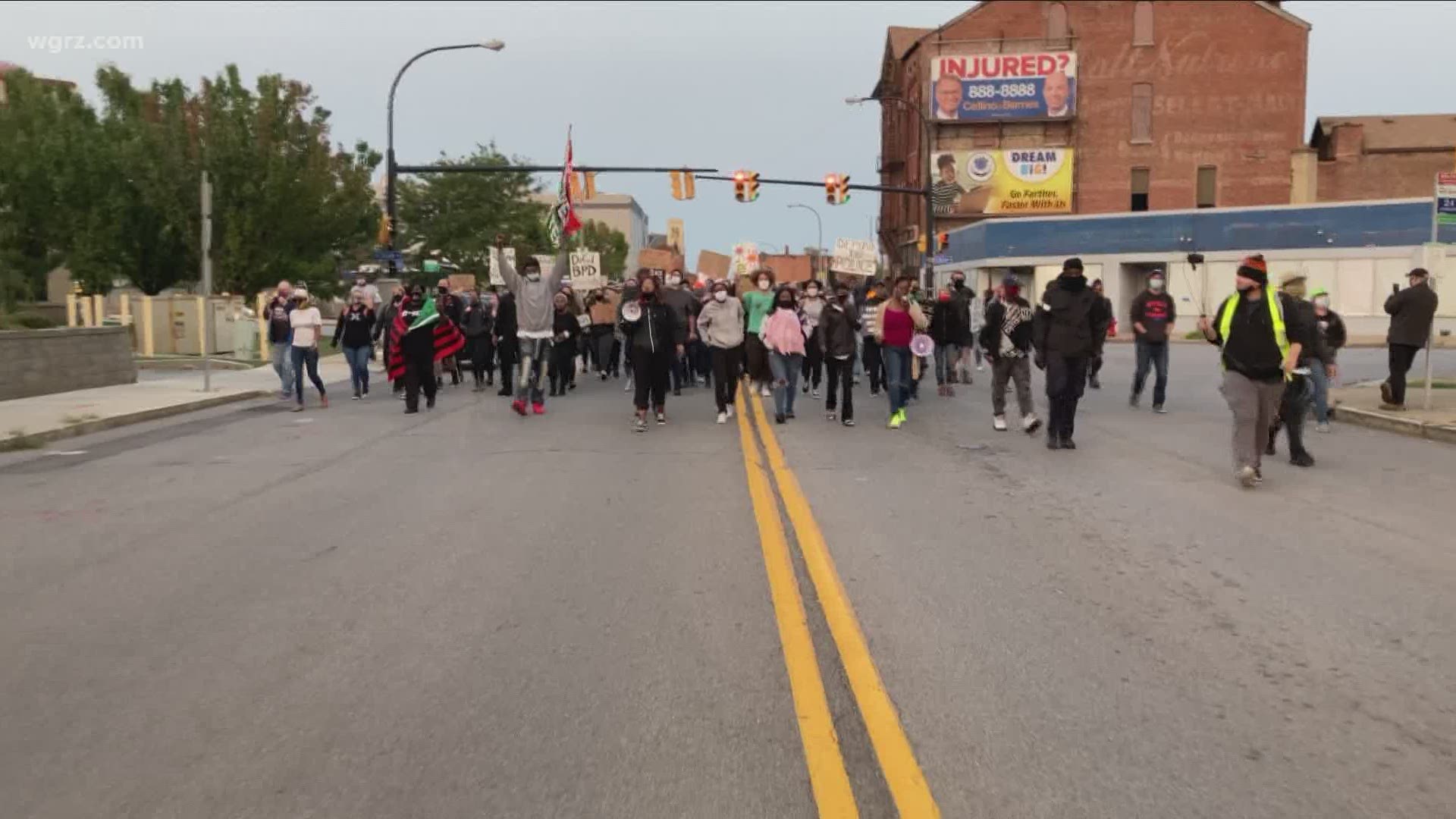 BUFFALO, N.Y. — A protest was held Tuesday night in the City of Buffalo in the name of Willie Henley — a man who was shot by a Buffalo Police officer during a mental health call over the weekend.

Henley is facing assault charges after allegedly hitting a Buffalo Police officer with an aluminum baseball bat on Saturday.

Our nonprofit partners at Investigative Post report people gathered around 6:30 p.m. Tuesday at the spot Henley was shot near Genesee Street and Michigan Avenue. Around 7 p.m. the group lined up and marched through the Buffalo toward the Niagara Square chanting "Say his name! Willie Henley!"

Protesters could also be heard chanting "no justice, no peace," "we ain't down with Byron Brown. He don't care about the town," and "don't shoot"

The march is underway through downtown pic.twitter.com/vd746dZ2wo

Ali Ingersoll, a reporter at Investigative Post, reports the word "resign" was painted in giant letters in the middle of the road outside of the Erie County Court building. Ingersoll says it was a message from protesters to Erie County District Attorney John J. Flynn.

Flynn told Ingersoll in response to the message, “I don’t get distracted or discouraged by people who disagree with me; I respect their opinion. I just do my job to the best of my ability each and every day and will continue to do so.”

“I don’t get distracted or discouraged by people who disagree with me; I respect their opinion. I just do my job to the best of my ability each and every day and will continue to do so.” - a response from @DAErieCountyNY John Flynn to @WGRZ after finding out about the painting

De’Jon Hall spoke with 2 On Your Side's Claudine Ewing earlier in the day saying, “We're calling for Mayor Brown, Commissioner Lockwood and unfortunately we have to call for the resignation of John Flynn too. After yesterday when John Flynn decided that it was OK to go into Mr. Henley’s hospital room and arraign him for a felony assault of an officer and carrying a weapon."

Protesters marched their way back down Genesee Street ending the protest around 8:30 p.m. where it began.

The group is now moving down Genessee toward their starting spot pic.twitter.com/zk6IhsHufJ

Willie Henley’s daughter, Monique, is addressing the crowd. “I just want to see my father,” she said. pic.twitter.com/BtCDaOCoxw