Their message was clear: Protestors say police brutality will not be tolerated. 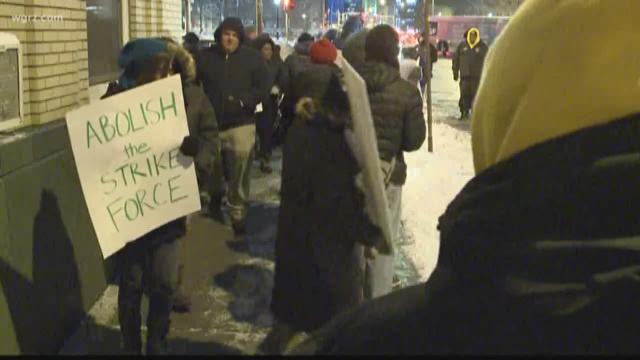 BUFFALO, N.Y. – A group of protestors who gathered outside of Buffalo Police Headquarters on Wednesday are upset the New York State Attorney General’s Office concluded no charges will be filed against the two Buffalo officers involved in the death of Wardel “Meech” Davis in February.

Their message was clear: Protestors say police brutality will not be tolerated.

Earlier Wednesday, the AG’s office said it would file no charged against officers Todd McAlister and Nicholas Parisi; the Buffalo Police Department’s internal investigation is ongoing.

"I hope Commissioner Derenda is listening, and I hope and I he wants to hold his officers accountable for committing murder,” said Natasha Soto, who helped organize the protest.

One of the points protestors wanted to make is that they feel there's a systematic problem.

"It's very difficult for the police, it seems to me, to ever recognize that they might have any kind of problems within the way they do policing,” Heron Simmonds said.

"I think we need to change our culture, and the way to do that is by not tolerating this questionable behavior,” he said. “Now, I don't want it to be that these two officers are some kind of scapegoat because it's not just these two officers.”

One of those policing policies protestors want changed is the city's “Strike Force,” which has come under scrutiny following an Investigative Post report that detailed 10 strike force or housing unit arrest cases thrown out by judges who determined the searches that led to the arrest were done unconstitutionally.

"The two cops involved were not members of Strike Force, but in reading the report, it became clear to me that there are some questions about the nature of the stop and search of Mr. Davis,” Porat said.