Who controls the site of the proposed Nicklaus golf course in South Buffalo?

Kevin Gaughan says his Better Parks Buffalo organization controls the remediated site, but Source Renewables says they do and have submitted a rezoning application. 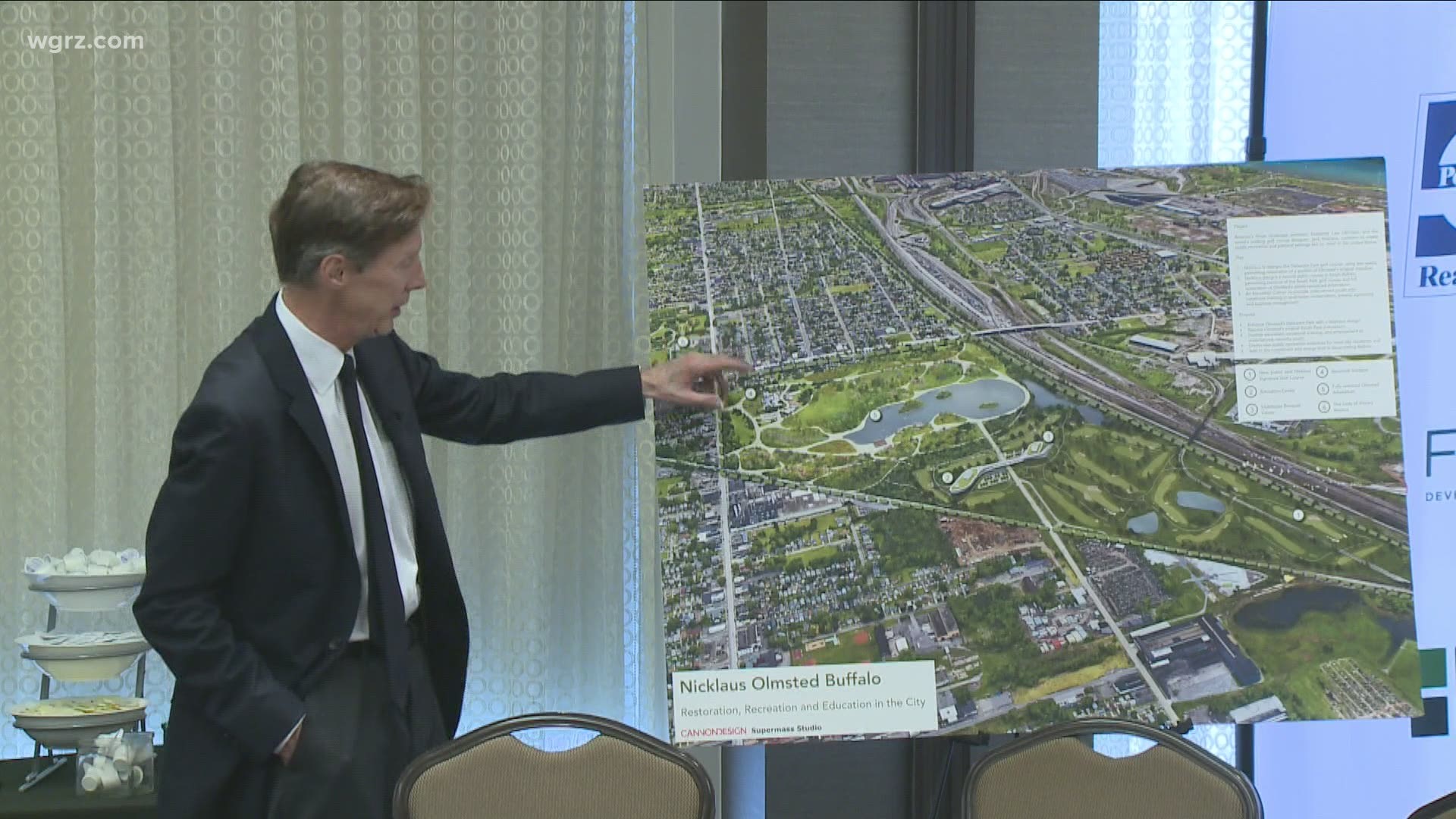 BUFFALO, N.Y. — For years a Jack Nicklaus-designed golf course in South Buffalo has been advocated for by Kevin Gaughan.

But now those plans are being questioned and potentially altered by a third party.

According to records from the Erie County Clerk's office, the Nicklaus Olmsted Buffalo organization obtained the deed for the parcel of land in the area of Hopkins Street, Marilla Street, and Tifft Street on August 7, 2018.

The property owner at the time, Steelfields Ltd., gifted the Nicklaus Olmsted organization $1.3 million in kind as part of the transaction, but with a condition.

"The only thing we asked back, was it Kevin's organization pay the promissory note of $500,000," said Rich Palumbo, a partner at Steelfields Ltd.

Palumbo says Gaughan or his organization never paid that money.

"He never even made the first principal payment," Palumbo said. "We engaged counsel to enforce our rights."

The lack of payment from the Nicklaus Olmsted organization led to a forbearer agreement between Steelfields and Gaughan's organization in July of 2019.

"It gave Kevin's organization additional time to repay the debt," Palumbo said. "It required him to pay late fees, and our attorneys fees, and an extra for that agreement to extend out the repayments."

The July of 2019 agreement also forced Gaughan to sign a confession of judgment, in which he accepted that he owed an excess of $541,000 to Steelfields Ltd.

2 On Your Side has obtained a copy of the forbearer agreement. Within that document, new terms for interest and principal payments are clearly defined.

2 On Your Side asked Gaughan directly if he made those payments.

"No, nor did they ask for them," Gaughan said in an interview at the site of his proposed golf course.

In April of 2020, Gaughan entered an option agreement with Source Renewables to create a small solar farm on a portion of the land the golf course would be built on. This agreement allowed Source Renewables access to some of the property, but not all of it, according to Gaughan.

Attorney's for Source Renewables says the option agreement allows the energy company to move forward with their own project.

Source Renewables wants to install two 5Mw solar farms on the 100-plus acre site on which the proposed Nicklaus course would be built.

The company submitted a rezoning application with the city of Buffalo on March 1, and the application is scheduled to be presented to the Common Council on March 13.

"We really think this is a win-win for the city, electricity customers, and taxpayers," said Andrew Day, a partner at Source Renewables.

Day says the solar farm will be tied into the grid and provide credits to the utility, which in turn will, on paper, at least, reduce the cost of electricity for residents and businesses in that area of South Buffalo.

Enough solar panels to power 2,500 will be installed at the site if the city of Buffalo approves the rezoning application.

Day says when they took control of the site in April 2020 several environmental and utility studies needed to be conducted.

"The feasibility of putting our plans into place was coming together," Day said. "We decided that now's the time that we're ready to move forward with our zoning applications."

According to Day, Source Renewable gave Gaughan an opportunity to break off the option agreement by paying off a fee.

Day says his company gave Gaughan an extension of November 1 to break up the option agreement, but that came in went.

Fundraising for this project has been a challenge for Gaughan, and that's something he hasn't kept a secret. Numerous fundraising events have been held in recent years.

"Our charitable company, Better Parks Buffalo, owns this land," Gaughan said. As every Western New Yorker knows, we've been working for five years to transform this into a public park with a wonderful recreation space for inner-city children and an education center."

Gaughan firmly states that his organization is the sole owner of the land.

Gaughan said he has a profound respect for the partners of Steelfields, and Source Renewable and hopes to settle this amicably.

"I have no interest and no taste for litigation," Gaughan said. "We all know, there are enough people going to courts and the like, and we're not going to do this."

Whether Gaughan wants to avoid litigation or not, the hiccup appears to be over the semantics of ownership and control, which Source Renewables counsel says is the heart of the issue which the option agreement clearly defines.