There will be a meeting Wednesday night to address what developers plan to do with the old Women and Children's Hospital building. 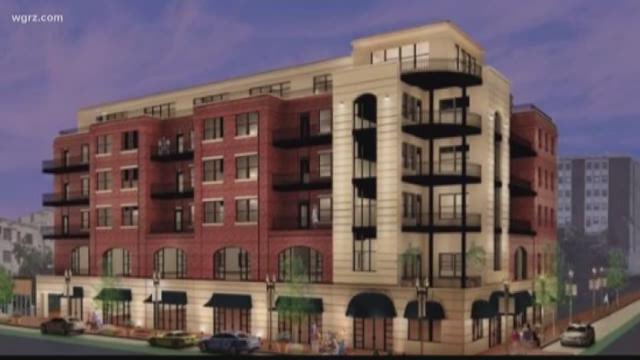 BUFFALO, NY — The public got its first chance Wednesday evening to address what developers plan to do with the old Women and Children's Hospital building.

Residents packed the 7 p.m. meeting at Lafayette Avenue Presbyterian Church in the Elmwood Village, sitting face-to-face with the developers as they unveiled some of their plans. The building, which is no longer owned by Kaleida Health, was sold to Sinatra and Company and Ellicott Development.

The developers envision a multi-use site, including but not limited to: a restaurant, grocery store, retail, higher-end condos, affordable housing, apartments and green space. The project would require very little demolition.

It hasn't come before the Planning Board or the city council, but Wednesday was the first official meeting offering a public glimpse into the early renderings.

Amy Nagy, the director of development for Sinatra and Company, said both companies plan to listen carefully to neighbors' concerns and will try to fit in with the fabric of the neighborhood.

"I think that's the most important thing-- that we return that vibrancy to that seven and a half acre site as soon as possible," Nagy said. "We want to deliver to the community something that is not a detraction to what exists. We want to compliment the existing neighborhood housing."

Some members of the Project Advisory Committee -- selected by Kaleida Health five years ago to help give input into the reuse proposals -- said they wouldn't necessarily be troubled by a green code variance as long as the community's needs are met.

Many members of both the committee and the general public have been pushing affordable housing and green space in particular.

Ellen Malone, a member of that Project Advisory Committee, said it's all about balance.

"We're looking for something that fits in, that we can use ourselves but will bring in new individuals into the neighborhood," Malone said, "without overwhelming where we are."