One of the biggest painting jobs in Western New York has commenced on the city's waterfront. However, it is being done with one of the smallest crews. 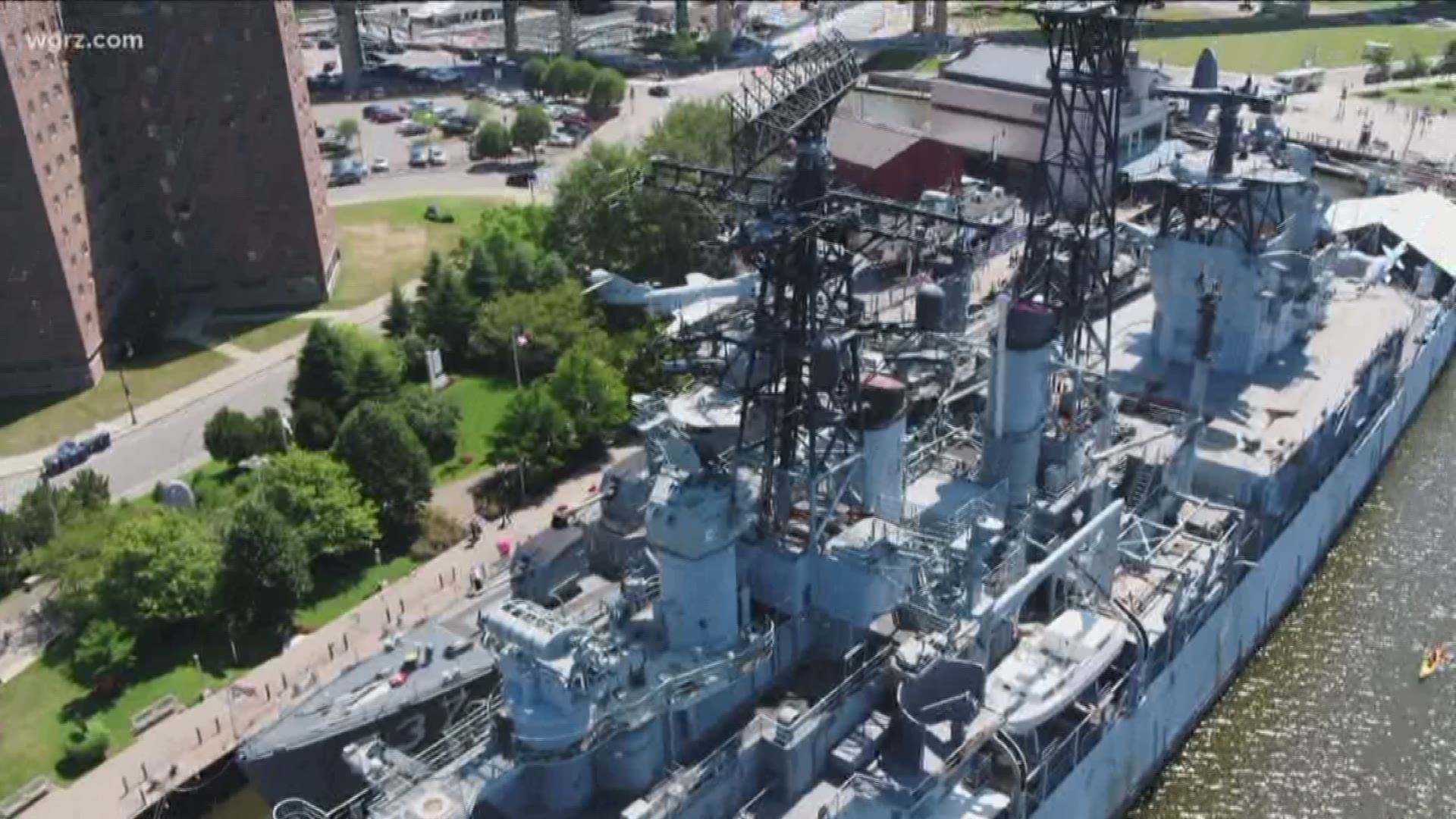 BUFFALO, NY - This time of year, outdoor improvement projects are in full swing. And one of the biggest painting jobs in Western New York has commenced on the city’s waterfront.

Ironically, it is being done with one of the smallest crews.

When the U.S.S. Little Rock, a retired warship docked at the Buffalo & Erie County Naval & Military Park, was on active duty, upwards of 1,200 sailors could be drafted to perform such a task.

These days, the job of repainting the ship’s entire port side hull has primarily fallen to two members of the park’s staff, Joe Pawli and Todd Caughill.

It’s a chore that has to be done every five years, according to Park Superintendent John Branning.

“Even though it’s heavy duty, oil based, marine-grade paint it still takes a beating over the seasons,” said Branning, while noting the port side, facing out toward the harbor, takes the brunt of the elements.

“We had seen how she looked last year, and we jumped in to volunteer to do this,” said Pawli, whose son Damion is also assisting him and Caughill by maintaining their safety lines and the ladders they use to descend to the floating platform they designed for the job.

“We started with a donated pontoon boat which we then fortified with some sheets of wood and then erected three floors of scaffolding on top of it," explained Caughill, in describing the perch from which the men work.

Hang On With One Hand, Paint With The Other

Anyone who has ever worked on scaffolding knows that every movement seems magnified when the scaffold sways. That’s even more so when you are floating on water.

“Sometimes it’s a little rough,” said Caughill. “Any boat that goes by creates a little wake, so you just kind of move with it. On days when you have a wave every two seconds that's a problem."

The men usually begin their three hour daily shift early in the morning, before the harbor gets too busy with traffic, and in order to beat the sun’s path around the ship, which by noon can be oppressive.

They set to their task two weeks ago, and have no timetable for finishing.

“It will be done whenever we’re done,” laughed Caughill.

The two use hand rollers for the job, and while an airless sprayer might make things easier, Caughill explained that environmental concerns made that prohibitive.

“We thought about it, but because this is oil based paint you wouldn’t want it to be sprayed into the water,” he said.

While it might be presumed that the ship is being painted “battleship gray”, that is not the case.

“It’s actually not,” confirmed Branning. “We have two basic colors, navy gray and haze gray,” adding that the darker haze gray is used for the hull and deck while the lighter navy gray is used to paint the ships other surfaces.

“The hull itself takes 90 gallons (to do one side) at about $35 per gallon, so it’s a chunk of change,” Branning said.

The upkeep of parks three vessels, the Little Rock, the nearby USS the Sullivans, and the submarine USS Croaker is ultimately supervised and inspected by the U.S. Navy.

“We try to keep up as best as we can with our staff, but it’s like a never ending battle” said Branning.

And when this battle is done, another will begin.

“Then we will start on repainting the Sullivans, so it continues,” Banning said.

For Pawli, the chore of painting the side of a navy ship-while seemingly daunting to many - is a labor of love.

“She deserves it,” he said, referring to the Little Rock. “She’s earned her beauty, and she needs to looks nice…that’s what I think,” he said.