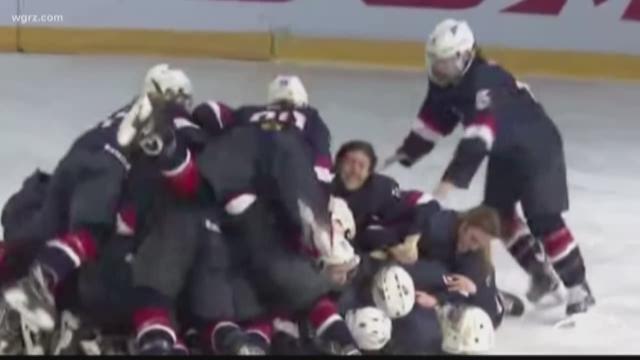 BUFFALO, N.Y.-- This week's "Great Kid" is a Western New York hockey player who is watching the Winter Games in PyeongChang and hoping she'll her have her own shot at an Olympic gold one day.

Katy Knoll, 17, lives and breathes hockey. She often spends more time at the rink than at home, but that's just fine for the junior at Nichols. Playing hockey is all she's wanted to do from the moment she could walk.

"We knew when she would put her skates on walked around the house and go up and down the stairs at 2 and a half years old, she was ready to get on the ice with her siblings," said Danny Knoll, Katy's father.

Katy was one of the only girls on the boys hockey teams for the Wheatfield Blades. She also played for the Niagara Junior Purple Eagles and several other teams. Hockey may have been her hobby growing up, but now it's her life.

Katy balances playing for Nichols 5 days per week, and driving to Canada 4 days per week to play for the Toronto Aeros where she's one of the leading scorers in the Provincial Women's Hockey League. She does all of that while keeping straight A's in school. Her parents couldn't be more proud.

"It's just amazing to watch this journey, and to keep seeing her set goals and then be able to reach them," said Sue Knoll, Katy's mother.

Nichols girls hockey coach Shelley Looney is also impressed by Katy. And that means a great deal since Looney herself is an Olympic gold medalist, scoring the game winning goal in Nagano in 1998. It was the first time women's hockey was in the Olympics and the only time Team USA won a gold in the sport. Looney also won a silver medal in Salt Lake City in 2002. She says the Olympics are a real possibility for Katy.

"Her dreams and goals are endless because of her work ethic and her God given talent," said Looney.

The highlight of Katy's young career came last month when she made USA's Under 18 women's hockey team. Wearing the red, white and blue, she scored twice in gold medal game for the IIHF World Championships in Russia. She helped Team USA win a fourth straight gold.

"I've dreamed about it for so long. To have the jersey on, with a gold medal around my neck, and to be singing our national anthem in a different country after we had just won the tournament, it was a surreal feeling for sure," said Katy.

Katy will continue to play for Nichols and the Toronto Aeros next year and she hopes to make USA's U-18 team again. Katy declared as a freshman to play hockey at Northeastern. Of course, for Katy the Olympics are the pot of gold at the end of this huge rainbow.