"It was unexpected when they were willing to take all 7 of us. I still think they're crazy for it!," said the couple's 15-year-old son Adelino Willis. 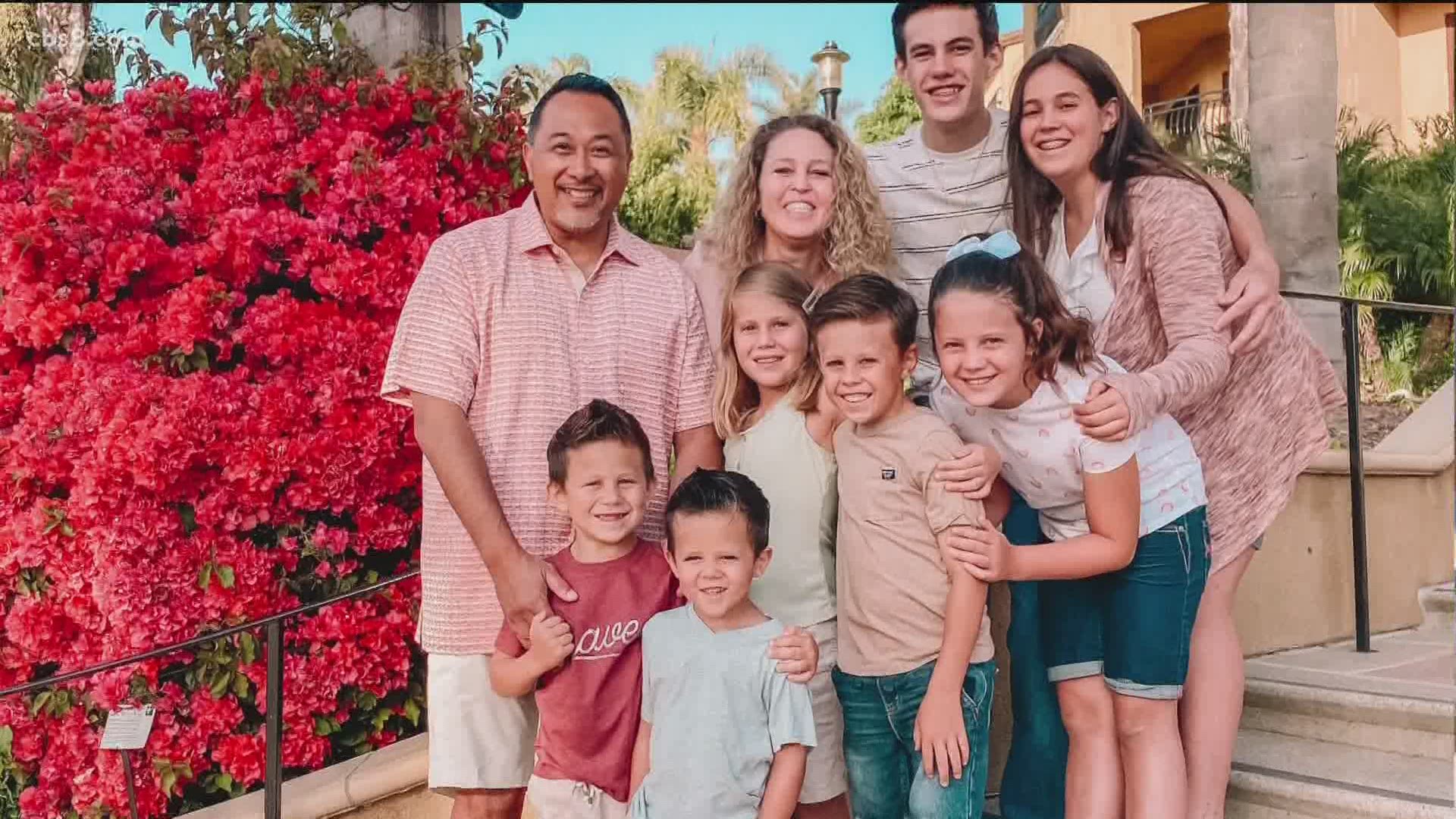 CARLSBAD, Calif. — "We're absolutely so blessed by that story and honestly, I watched it over and over again when I first saw it," said Pamela Willis, now a mother of 12!

A three-minute news story is all it took, to change her family's life forever.

They finalized the adoptions during the pandemic, and now that things are opening back up, I was finally able to reunite with the children in person and meet their incredible parents.

Seeing Ruby in 2021 was extra emotional, the last time we hugged was in December 2018 when she was only 11.

Back then, we featured the seven siblings who had just been through unthinkable trauma and were still processing their grief and loss. Their parents were killed in a tragic accident while driving through El Centro, California. The children were all thrown from the vehicle in the rollover crash, but incredibly, all of them survived.

Ages 2 to 13 at the time, the children were in foster care and were in need of one forever family willing to take them all in and provide a new, loving home.

Our story went viral and was shared countless times on Facebook. When it crossed Pam's feed, she stopped to watch it, and the children instantly captured her heart.

Pam said she wasn't sure how her husband Gary would react. So she simply tagged him in the post and waited.

Later that night, Pam asked Gary if he had seen the story about the seven siblings on Facebook.

Pam said she was ready to convince him.

"I tagged him and went to him later that night, 'Did you see the post? We have the space. We have the room.' He said 'Yeah...' He paused and said 'We should adopt them,'" Pam said. "I was shocked. I was ready to convince him. We both felt it. Everything had aligned in our lives at that time to be able to do that and it was just so perfect."

With their fifth and youngest biological child about to graduate from high school, Pam and Gary knew they had room in their hearts and their home.

Gary said he didn't want to let one of the siblings, Ruby, down.

And that it was the first thing on her list.

"I'm very grateful," she said. "Well, I didn't think we'd find a family that would take all of us that's for sure because it's insane! You gotta be really crazy to take seven kids, especially how all of us are and all of the problems that we have."

There are the physical scars from surviving the fiery crash.

"These are the burns," said Ruby. "I have some on my back, shoulder, one here, and I've got my knee and hip surgery, I mean knee and thigh surgeries."

And there are emotional scars as well.

"My mental scars are healing slowly; slowly but surely," she said.

They explained life was tough even before the crash.

"Yes, we were homeless a few times," said 15-year-old Adelino, who remembered living in and out of shelters with his parents and siblings, drifting from place to place.

"Basically 'hell,' is how I would describe it," he said. "Hardly any food, arguing with my parents, or they were holed up in their room."

When Adelino thinks about the path his life was on and the severe injuries and broken bones from the crash - including two in his neck and spine, a shattered foot and fractured ribs - he credits his forever family for giving him new hope and a reason to live.

"Thank you for everything," he said. "You took us out of a really difficult, difficult time and honestly, I probably wouldn't have been here now if it weren't for you guys. Thank you."

The younger kids are also appreciative. They were celebrating their first Mother's Day as an official family when I met up with them in Carlsbad at the Hilton Grand Vacations at Mar Brisa Resort where Pam enjoyed some well-deserved rest and relaxation.

"She has been a great mom and she was taking care of us and making us feel all better," said Anthony.

Pam and Gary, who began fostering in 2013, are now inspiring countless others to foster and adopt.

"I've had so many people message me and say, 'how do I get started?'" said Pam.

After the children's adoption was finalized in August 2020, their oldest daughter created a 15-second video of the couple's life and they became Instagram sensations overnight.

What's happened? They now have a huge following. Known as Second.Chance.7 they are influencers of one of the greatest gifts you could ever give or receive.

"There are so many children in need of homes - as you know from doing your stories - and I feel this huge responsibility to make people aware of that," said Pam. "I think it's a whole world people don't understand or know, but if they did -  would have a heart for it."

News 8 thanks the Hilton Grand Vacations at MarBrisa in Carlsbad for inviting us there for the reunion once adults had been vaccinated and pandemic restrictions have relaxed.