We are learning new information about the officer-involved shooting in Buffalo. 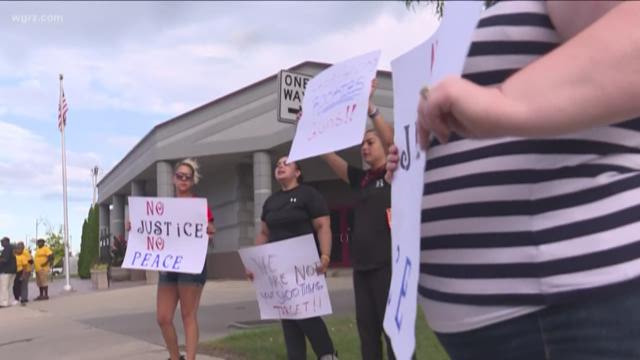 They do not think Rivera had a gun and want his death investigated as a homicide.

"It wasn't a back and forth shots. They weren't shooting at each other. He had no gun. So, you shot him for nothing," said one friend.

"I've known him my entire life pretty much, like, if he was going to fight somebody, he'll fight somebody. He was a bare-knuckle kind of guy. No weapons needed," said another friend.

Thursday night, Buffalo Police declined an on-camera interview request, but a spokesperson told 2 On Your Side a loaded handgun was recovered at the scene which is what Deputy Commissioner Joseph Gramaglia told reporters Wednesday.

"The suspect has a deadly weapon, a loaded handgun," said Gramaglia. "The weapon was out, the weapon was in his hand."

Police also said Wednesday they were looking at video of the deadly shooting. When 2 On Your Side returned to the shooting scene Thursday, we found several surveillance cameras pointing in almost every direction.

The Rivera family has hired an attorney who says the family has not seen Rivera's body.

"I tried to go into the medical examiner's office today and they would not allow me to view the body. I want to see if the entrance wounds are in the back or not, and no one's allowed to give me the answer to that question," said Steven Cohen.

2 On Your Side also reached out to PUSH Buffalo, the community organization with offices at School 77 which presumably has control of some of the surveillance cameras which may have captured what happened Wednesday morning. We wanted to know more about that potential video evidence. We have not heard back.