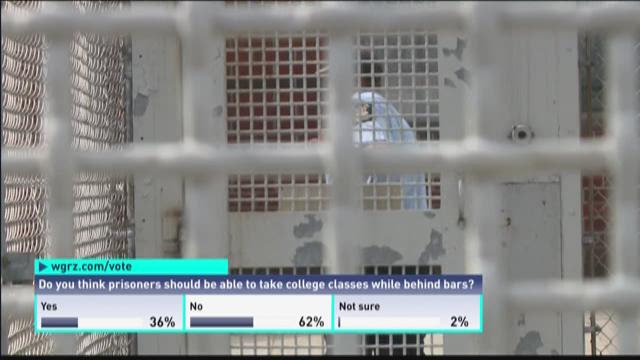 Seven colleges will begin or expand offerings for prisoners at 17 correctional facilities across New York over the next five years as part of the College-in-Prison Reentry Program, a joint program between Gov. Andrew Cuomo's administration and New York County District Attorney Cyrus Vance . Cuomo and Vance unveiled the colleges and prisons program Monday.

Among them are Cornell, which will expand its program at four correctional facilities, including Elmira and Cayuga.

In all, there will be 2,500 new seats for college-education programs in state prisons, according to Cuomo's office.
Gov. Cuomo said "It has never been more evident that a college education is an important stepping stone to success and by partnering with District Attorney Vance, that success will reach those who never thought they could achieve it."

He was immediately met with a wave of backlash from conservatives and college students, who questioned the state covering costs for inmates at a time when expenses were rising for non-inmate students.

Last year, Cuomo and Vance came up with a compromise: Vance's office provided more than $7 million dollars recovered from settlements with large banks to fund a scaled-back program.

HSBC Bank, which had its US operations formerly based in Buffalo, was one of those banks which were accused of criminal charges. The bank had agreed in 2012 to pay $375 Million dollars in penalties and forfeiture.

The Manhattan District Attorney's Office charged the bank with allowing funding from Iran and other countries to flow into the US with alleged violations of federal sanctions against Iran and other countries. HSBC was also accused of violating New York State law for falsifying records as a financial institution. Their payment resolved the case.

Some colleges -- including Cornell -- already offered college courses to prisoners, though those initiatives were privately funded. Statewide, about 1,000 prisoners currently take college-level courses, according to the state.

Medaille College President Dr. Kenneth Macur tells 2 on Your Side that they will get just over $400,000 dollars in funding which will have to be matched with private foundation funding to cover their program at Albion Correctional Facility for Women in Orleans County. It will allow them to expand their program to 80 female inmates.

In the past, other colleges such as Niagara, Canisius, and Daemen have also offered college courses for inmates in specially funded programs.