Residents who live east of Main St. in Buffalo are digitally segregated from the rest of the city, new map shows. 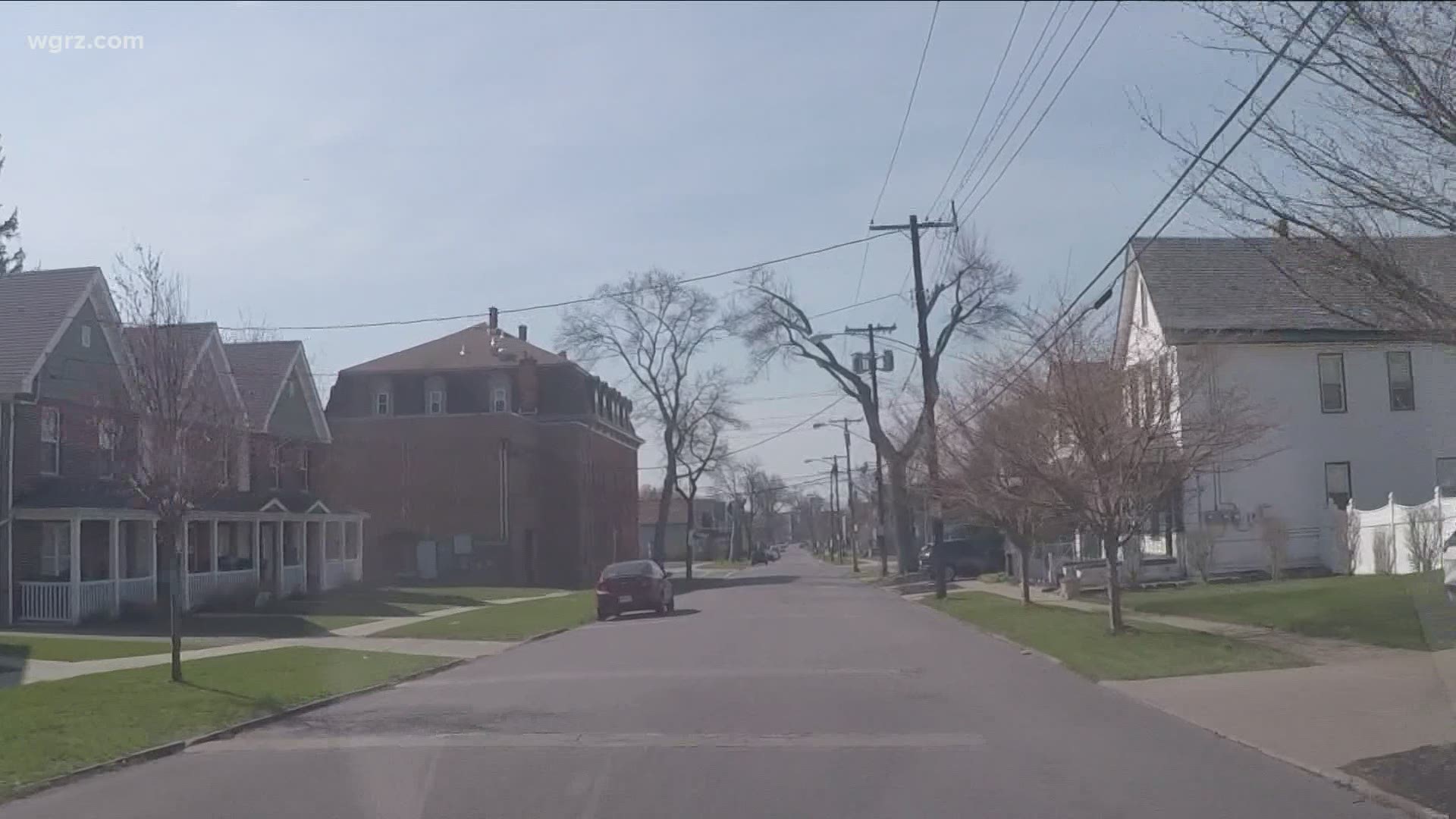 Accepting these realities is the first step to the road to recovery. But in truth, the situation is that the problem of digital equity and broadband access won’t be solved within the next five years. Ten years is possible according to several engineers, experts, and observers of the situation in the region.

The latest broadband map from the NTIA made this segregation all too apparent.

The divide is clear for the city of Buffalo -- if you live east of Main St. it’s probable that anywhere between 25-45% of the neighborhood doesn’t have internet access at home. Additionally, a similar divide exists for residents of the city lacking a smartphone.

The data from the NTIA measures lack of access due to affordability as well as physical lines being run to a home or business - a point that officials from the state Broadband Program Office quickly pointed out to 2 On Your Side.

Internet speeds across the one-carrier city make little sense. The high-tech hub known as the medical campus shares a census tract with the Fruit Belt. The census tract averages an internet speed of 8Mbps.

The average speed in downtown Buffalo is 17Mbps.

One of the issues, however, with the data the NTIA used for the broadband map is that broadband mapping data is widely accepted as, at a minimum, flawed by industry experts and at worst - outright fraudulent. For years the FCC has allowed internet service providers to consider a census block covered so long as one building within the block was connected. This has led to rampant broadband mapping

The truth is, the painting of Buffalo in the NTIA map could be exponentially worse if the data were truly audited.

When it comes to the issue of digital equity and broadband access, Mayor Brown is looking forward, not in the past.

"We will be looking at ways to expand internet access, particularly public internet access in our community," Mayor Brown told WGRZ. "We finally now under the Biden Harris administration, and the change in attitudes in the federal government, I believe we'll have the resources to be able to make these kinds of critical investments."

Mayor Brown has done some things to try and bridge the gap. His administration enabled multiple open wi-fi hotspots across downtown, Jefferson Ave, and Canalside.

"In 2019, we created a smart city sub-cabinet to look at issues of digital access, digital equity, affordability, that group is meeting now," the mayor said.

One of the items the smart city cabinet prioritized was issuing another broadband survey. Erie County funded a survey in 2017, but Mayor Brown said they’re looking for fresher data now that the pandemic has changed so much of our digital life.

"One of the things that we've worked to do in the city of Buffalo is reducing business, red tape, make the regulatory environment a lot easier for people to invest in this community," Mayor Brown explained.

Mayor Brown is referring to the December 2019 change in city policy that came after 2 On Your Side started asking city officials why Buffalo only had one internet provider.

When the pandemic hit, the divide was exasperated and thousands of Buffalo school students were left in the digital dark.

The problem was so bad, in fact, the city, Spectrum, and the Buffalo Bills collaborated to provide students with access.

"That was a great partnership that really addressed a major need that many of our students were experiencing," Brown said.

Students will only receive that service until the last day of school, June 25, the end of this week.

For Mayor Brown, all his eggs are in the Biden basket, which is trying to dole out billions for infrastructure spending.

Someone else has been taking notice of Buffalo’s broadband and digital equity woes as of late, Buffalo activist and mayoral candidate India Walton.

"Buffalo for as many resources as come that come into the city, and being the second-largest city in New York State, the disparities are still very stark," Walton told WGRZ. "It's almost as if our local official officials have been asleep at the wheel, I think it is concerning that we are still a one-provider town when we know that if you cross over one street, people have 2,3, 4 options."

Walton took aim at the Brown administration's use of CARES Act funding to conduct another broadband study.

"I think it's very interesting that we elect to spend resources conducting studies when we already have the data that proves where the gaps are," Walton said. "Rather than investing that money right into neighborhoods and communities, where we can be effective, we choose to further you know, support the studies that often translate into not meaningful action and in closing the gap."

Walton pointed out what several city hall sources have told 2 On Your Side in the background.

Walton said there seems to be no organized effort for city officials to go door to door and survey city residents about broadband access and digital equity.

If the NTIA broadband map says anything, it’s that a grassroots effort to get data from city residents is needed.

One of the cornerstones of Walton’s plan to move Buffalo forward, if she were elected, would be to go full throttle on a municipal broadband system for the city of Buffalo, regardless of the cost.

"My values dictate that things like broadband access should be communally owned, and when we think about how we're going to pay for that, right, like these things, over time, pay for themselves," Walton said. "It turns out to be more of a net benefit to the community than a detriment. "

Walton says she would follow a similar plan that Chatanooga, Tennessee implemented, which is considered the model municipal broadband system in the country by the majority of experts WGRZ has spoken to.

"All we have to do is be brave, brave enough, bold enough, innovative enough, and visionary enough to take that risk.

Mayor Brown has taken notice of a renewed municipal broadband interest as well. A grassroots effort for a municipal system garnered little traction in 2014/2015 but fizzled out.

"I think one of the problems before was resources was the money there to actually do a municipal system," Brown said. "I think now with the money that is coming from the federal government money that's already here, and hopefully additional money that will come through the American jobs plan."

Mayor Brown and India Walton face off in a June 22 mayoral primary, but the digital gap will still exist beyond election season and rhetoric.

As for the NTIA data, 2 On Your Side reached out to the NYS Broadband Program Office to comment. At face value, the data would suggest that only 86% of New York State has internet access. As you dig deeper into the data the NTIA provided, they calculate both affordability and accessibility into their data -- which is why the state stands by its claim of 98% coverage.

A spokesperson for the state broadband program wrote:

"The NTIA's data set titled ‘Percent of Households with No Internet Access’ not only counts households without availability to the internet in their figures but also includes those that cannot afford broadband or do not subscribe for other reasons.

The fact remains that 98 percent of New Yorkers have broadband available where they live, but not all of them are using it.  This is why Governor Cuomo has pushed for low-cost internet for households who cannot afford broadband and recently signed legislation to ensure that we have granular, address-level broadband data maps so we can close the gap for good.

This data is most likely pulled directly from American Community Survey data (census) as noted in the about page of the map and is simply an observation that a household does not have access, which as noted above, could be for affordability or other reasons.

•    For example - The data in question shows that 8.8% of households in New York County (Manhattan) and as many as 42% of households in certain census tracts in Bronx County have no internet access. To say that these figures are indicative of no availability isn’t true. It is, however logical that there are many sections of the Bronx that may not subscribe for whatever reason (ie. Affordability)."

Currently, the NYS Public Service Commission is conducting a broadband study to determine access across the state. Additionally, the NYS Broadband Program is being audited by the state comptroller's office, that report is expected by the end of the year.