A potentially dangerous algae bloom has been found for the first time in Delaware Park's Hoyt Lake. However, tests did not find any detectable levels of harmful toxins sometimes associated with the blooms. 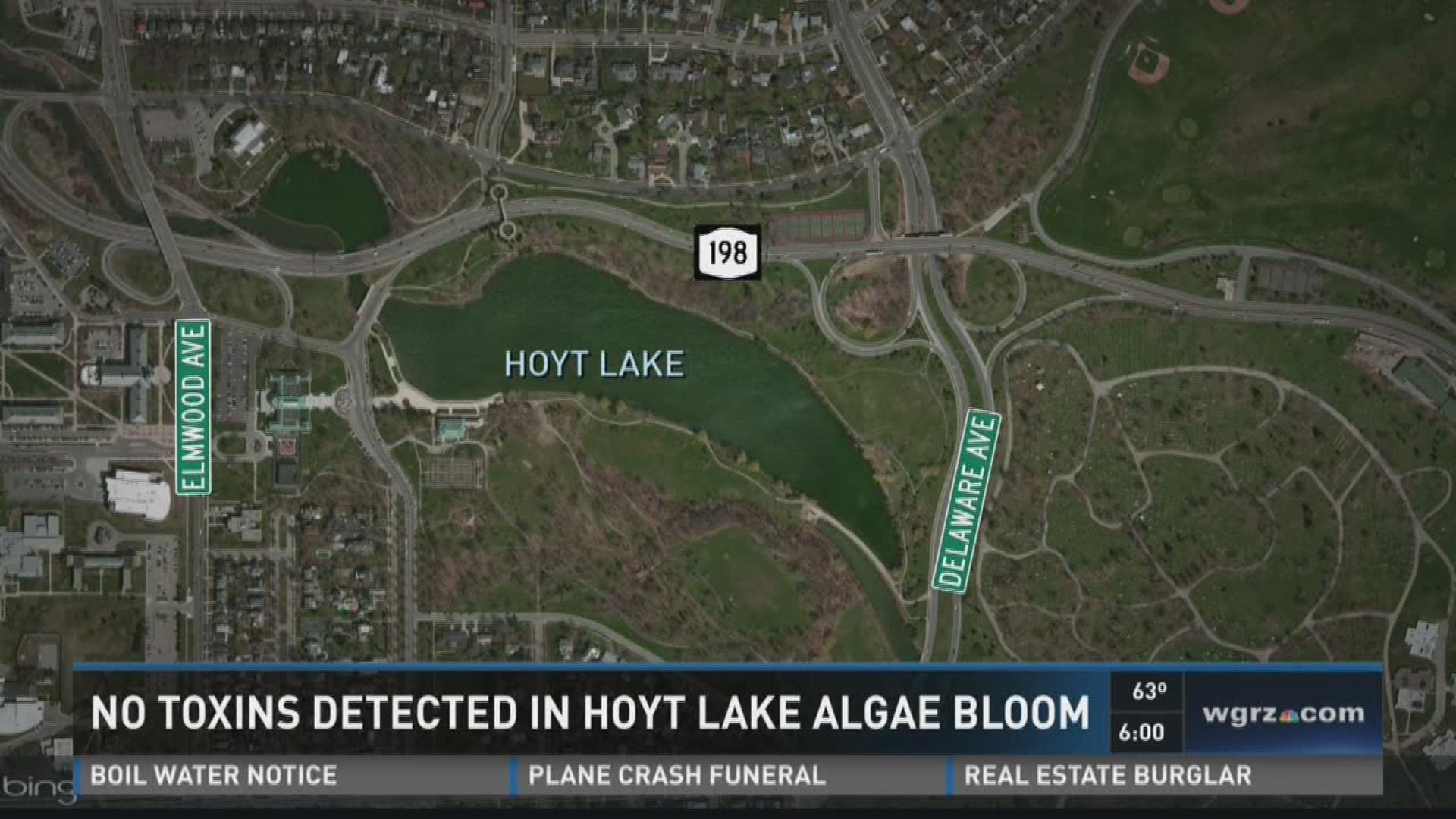 BUFFALO, NY - A potentially dangerous algae bloom has been found for the first time in Delaware Park's Hoyt Lake.

However, the NY State Department of Environmental Conservation (DEC), says test results from water samples taken on September 20 did not find any detectable levels of harmful toxins sometimes associated with the blooms.

"Anything that could be a threat to public safety is very concerning to us," said Brian Dold with the Olmsted Parks Conservancy which maintains the park.

As a precaution, the City of Buffalo has posted signs near the lake advising of the existence of the bloom, which appears as a substance that resembles spilled paint or pea soup, and the Conservancy has suspended all water activities, including boat rentals, until further notice.

"Having a (potentially) harmful algae bloom is something that is not unexpected,” said Jill Jedlicka, Executive Director the environmental activist group Buffalo Niagara Riverkeepers.

“We’re seeing them all over the country and especially in New York state, and they are accelerating.”

According to Rebecca Gorney Ph. D, an algae specialist with the DEC, algae are present in all lakes.

"But the conditions that lead it to turn into blooms and excessive growth are not really clear cut," Gorney told WGRZ-TV.

Enabling factors include unusually warm weather with plentiful sunshine, which we experienced in Western New York this summer.

However, the most common trigger, according to Gorney, is excess nutrients for the algae in the water.

Jedlicka notes these ingredients are often found in excess run off from storm sewage.

“And we know sewer overflows exist in the Scajaquada basin,” she said.

“I’m surprised it hasn’t happened earlier,” said Dan Telvock of Investigative Post, who has reported extensively on pollution problems in Scajaquada Creek, which feeds the lake.

“Those problems are still continuing, and while the Buffalo Sewer Authority has a plan to address it, most of the fixes are in the long term - not the short term," Telvock said.

Even if the algae should suddenly start producing toxins, the DEC says it would unlikely be harmful to humans unless a person immersed themselves in the water for a considerable period of time, or drank it.

The more present danger would be to dogs, which officials urge should be kept out of Hoyt Lake.

“Dogs are more likely to ingest large quantities of lake water from gulping it, or from grooming their fur and things like that," Gorney said.

As for what might be done—there’s not much in the short term.

“If you try to destroy the algae, the toxins can get released and make it worse," said Gorney, who added that it is often best to let nature take its course.

"The cooler weather should lead to the algae dying back a bit. Really, it’s more of a long term solution that involves reducing nutrient inputs into the lake and trying to reduce them," she said.

“That just goes to show that the Scajaquada is a priority to our region,” said Jedlicka.
‘We need to restore its hydrology and clean it up to try and prevent things like this from happening.”

Officials say a fountain installed in the lake to aerate the water, and which ceased working this summer, would have not prevented the presence of algae, nor stemmed the bloom once it formed.