NYS budget: Four ways you may be impacted

Gov. Andrew Cuomo on Tuesday will release his budget proposal for the upcoming fiscal year, and there is plenty to watch for. 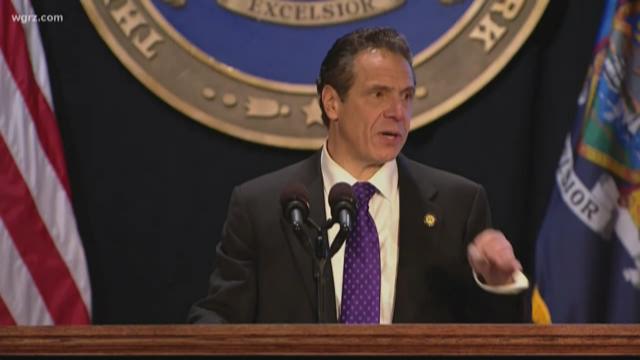 ALBANY - Gov. Andrew Cuomo on Tuesday will release his budget proposal for the upcoming fiscal year, and there is plenty to watch for.

The state faces a $4.4 billion deficit for the fiscal year that starts April 1, and New York is also bracing for policies out of Washington that could further put New York's finances out of balance.

"We are New York state, we have faced challenges internationally, domestically, and the threat from this federal government is not going to derail the great state of New York. That I promise you," Cuomo said during his State of the State address Jan. 3.

Here are four budget issues to watch for:

The state's deficit is the largest since Cuomo's first year in office, but it will likely be whittled down to a $1.8 billion hole because the Democratic governor has vowed to limit state spending growth to 2 percent a year.

But even with a $1.8 billion gap, New York will have limited revenue to spend on programs and services.

When Cuomo presents his plan 1 p.m. Tuesday, he will show how he will close the deficit and balance the state's books. The current state budget is $153 billion.

Then it will be up to the state Legislature to negotiate a deal with him as they eye the March 31 deadline to have an on-time deal.

The budget gap has Republicans, in particular, calling for fiscal restraint and eying the roughly $8 billion spent in New York on economic-development initiatives.

"Let’s not pass the buck. Let’s roll up our sleeves and do our part to make NY more affordable," Sen. Fred Akshar, R-Colesville, Broome County, wrote Jan. 9 on Twitter.

"It’s not the federal government's fault people are fleeing NY. A little self reflection goes a long way."

Cuomo has railed against Congress and President Donald Trump, saying its recent tax policy and potential cuts to health-care programs may hurt the state's finances.

"In New York, healthcare is not just for the rich, it's a human right. And we're going to protect it," he said in his speech.

But that commitment may come with tough financial choices for New York leaders.

New York could face billions of dollars in cuts to Medicaid and health-care programs for the poor.

The question would be whether the state makes up the difference in spending increases.

Already, New York is sorting out the impact of the federal decision to end an individual mandate as part of Obamacare. There is also the potential loss of funding for the Essential Plan, which provides health insurance for about 700,000 New Yorkers through the state's health exchange.

And with a federal budget deadline surpassed Oct. 1, health-care groups in New York are concerned about a loss of funding for the Children’s Health Insurance Program and other subsidized programs.

“The clock is ticking, and the viability of a huge swath of New York’s health care delivery system is at stake,” Kenneth Raske, president of the Greater New York Hospital Association, said in a statement.

Cuomo is also facing a pledge to figure out a way around the federal tax policy that limits state and local tax deductions to $10,000 a year.

Cuomo has warned the limitation would hurt New Yorkers with high taxes, mainly those in New York City and its suburbs.

In his budget, Cuomo is expected to propose at least one alternative, such as moving New York away from an income tax to a payroll tax -- which could shield homeowners' tax deductions.

He is also considering what others high-tax states are contemplating: creating a charitable contribution program to pay for state services -- another way to work around the tax law.

There has been support and criticism for both ideas, but Cuomo said New York needs to find a way to avoid the tax hit from the federal plan.

"If we do not fix this problem, it is a question of the State of New York's economic viability in the long term," he said in his address.

The largest state piece of the budget is for school aid -- which stands at $25.8 billion, by far the most per capita of any state in the nation.

While school aid has increased 32 percent over the past six years, districts and the state Board of Regents are seeking $1.6 billion more.

The Board of Regents last month said the $1.6 billion increase would provide "much-needed resources for school districts to maintain their base operations and educational programs while allowing for expansions in specified priority areas."

The fight over school aid for the roughly 700 districts in New York is also one of the top issues during budget deliberations.

The governor proposes an amount, then the Legislature usually counters with a larger amount to appease their hometown districts. Then they typically find a number somewhere in the middle.

But with a significant budget deficit, the negotiations will face added pressure. And the starting point will be what Cuomo proposes Tuesday.

In his address, Cuomo echoed concerns of education advocates that more state aid needs to go to poor districts.

"Local districts must give more funding to their poorer schools, period. That's only right."

If Governor Cuomo is sharing details of his spending plan, Democratic lawmakers have been not been brought up to speed as of yet. 2 On-Your-Side has learned of a gathering of legislature Democrats from WNY. We're hearing there are at least questions, if not concerns how the Governor's budget deficit fix may impact various state programs.

And if spending increases for some program are in line, then some cuts would seemingly be necessary.

State Senator Robert Ortt, a Republican from Lockport, says the Governor's office should share in any budget pain.

“If we’re going to make cuts to things that are important to our constituents, the Governor has to be willing to make those same concessions in his economic development programs that he made a hallmark of his administration.”