It appears the vast majority of hand gun owners who were issued pistol permits prior to January 15, 2013 have yet to renew them, despite a new requirement to do so by January 31, 2018. 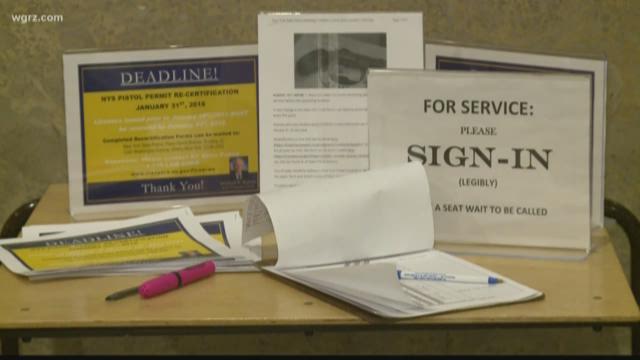 BUFFALO, NY — The Erie County Clerk is trying to deal with a potential glut of gun owners seeking to meet the deadline to renew their pistol permits under the NY SAFE Act, by taking steps to stem the tide of what's expected to be a last minute rush.

“We think that there is approximately 50,000 permits (in Erie County) that haven't been renewed, said Erie County Clerk Michael Kearns.

Prior to the SAFE Act, pistol permits were good for the life of the permit holder. Now they must be recertified with NY State Police every five years.

Kearns believes many are unaware that they can recertify their permits online, or through the mail via forms which are available at all Department of Motor Vehicle offices in the county.

Due to this, many permit holders are showing up at the County Clerk's office downtown, seeking assistance.

“We are doing what they can to assist them, but right now we cannot handle the volume…we are asking people to be patient," said Kearns.

"Gun ownership in Erie County has gone up every year over the past five years," said Kearns, about a trend that has also been reflected state-wide.

However, those seeking a permit for the first time cannot do that online or through the mail. And when they come, as they must, to the clerk's office they will likely be waiting in line with a host of others seeking to renew existing permits.

“So I have decided that if you are looking to apply for a new (first time) pistol permit you have to call the office and schedule an appointment. That way we can set you up with a staff member who will be ready to guide you through the process more efficiently,” Kearns said.

Kearns was a NY State Assemblyman in 2013 when the SAFE Act was pushed through as a so-called matter of necessity by Cuomo, in the wake of the Sandy Hook school shootings without much thought given on how to implement its many aspects.

"It was put on our desk in the middle of the night and they wanted us to vote on this without reading it," recalled Kearns, who declined to vote to pass the measure.

"I voted against the SAFE Act, I think it was a political stunt by the governor. That's my opinion," Kearns said.

Opinions aside, however, Kearns said it is vital for pistol permit holders and legal gun owners to recognize that the SAFE Act is indeed the law in the state, and therefore must be complied with.

"If I were you and I had a pistol permit, I would recertify it,” said Kearns. “Because if you do not re-certify it's an automatic revocation of your license."