While health officials expected that COVID-19 mitigation efforts could lead to a decrease in influenza, they may not have expected the drop to be this dramatic. 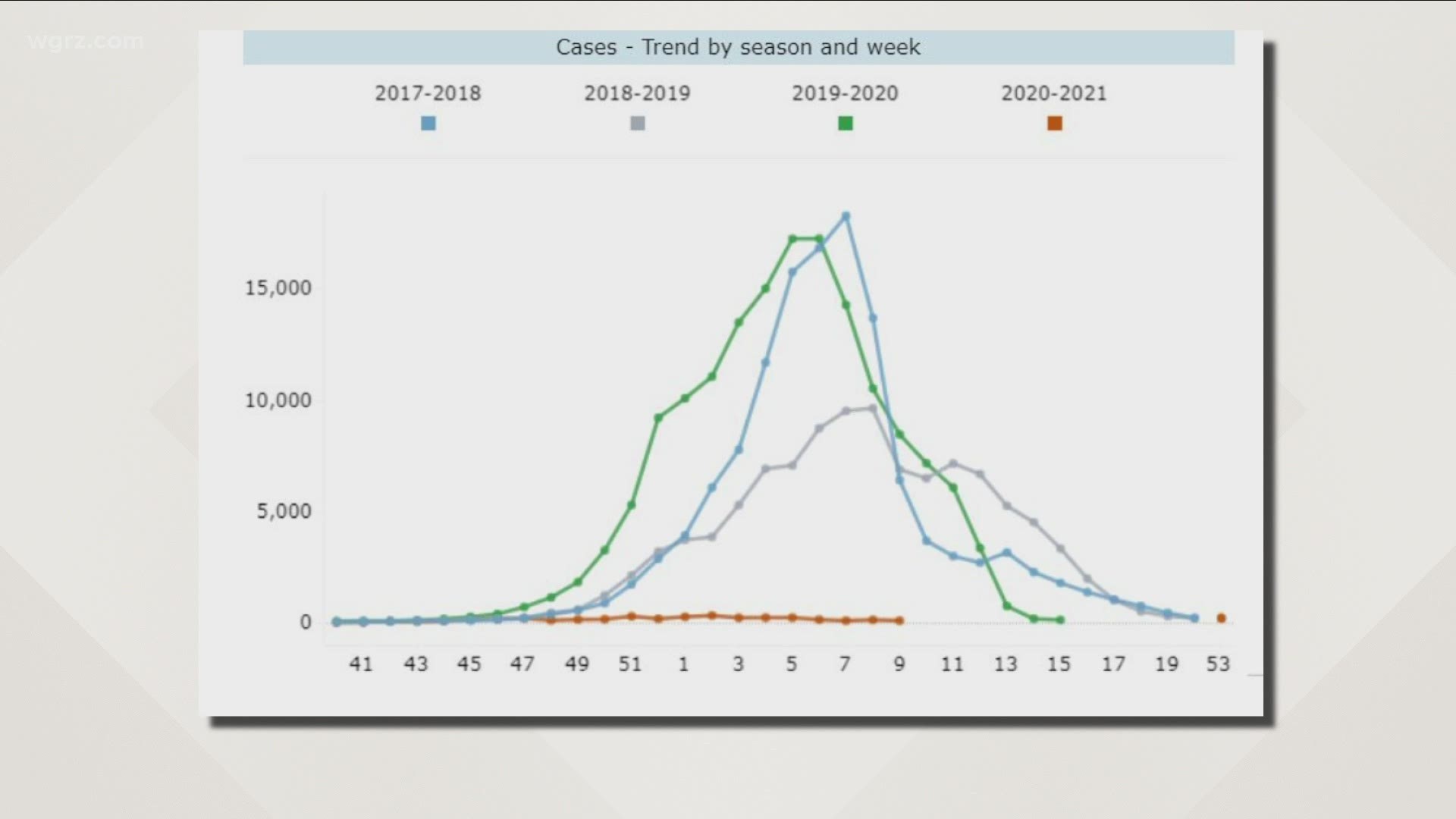 “Fortunately, that has not happened," said Dr. Thomas Russo, an infectious disease specialist with the University at Buffalo Jacobs School of Medicine.

As of March 6, according to New York State Department of Health Flu Tracker, there were just under 4,000 laboratory confirmed cases of influenza in the state since the start of the most current flu season in the fall.

When compared to the roughly 147,000 cases reported by this time in the 2019-2020 flu season, this reflects an astounding 97 percent decrease.

Russo attributes the dramatic decrease in influenza this season mostly to the public health measures taken to mitigate the spread of COVID, including the wearing of masks, efforts by individuals to keep physically distant from one another, the absence of people in workplaces and in schools, and prohibitions on large gatherings.

“People have employed those public health measures to protect themselves from getting COVID and that combination has really stuffed influenza quite effectively," Russo said.

In addition, he says another component in all of this can be traced to half a world away.

“I think it's in part because we had such a mild influenza season in the southern hemisphere,” Russo said.

There, he noted, the same measures to curb COVID were in place during their flu season prior to ours and they also had a big drop off in flu cases.

Further, due to travel restrictions, whatever influenza they did have had less of a path to arrive here than in an ordinary year.

“And so the employment of public health measures combined with a low case burden coming in from the southern hemisphere is the most likely explanation for our low number of (flu) cases,” he said.

Why Hasn’t this Stopped COVID?

As coronavirus and influenza are both spread primarily in the same fashion, through respiratory droplets, it raises the question of why these measures may have flushed the flu but failed to clobber COVID.

“It’s an interesting question,” concurred Russo, who said there were several factors involved beyond the low case burden of influenza from the southern hemisphere.

“Firstly, everyone has some degree of protection against influenzas regardless of whether they were vaccinated or not, and this is from prior infections,” Russo said.

That is to say that, prior to last year, no one had COVID nor had they been exposed to it.

“Also, we had an increase in the number of people that got vaccinated for influenza and initially, when the flu season began, we did not have a vaccine for COVID," Russo said.

Russo also noted that, “the new coronavirus that causes COVID is much more infectious than influenza."

While there have been social media posts suggesting that the state has been counting cases of flu as COVID, Russo says he’s seen no evidence of that.

As well, there have been other claims that numbers of influenza cases are dramatically lower because the state has not been testing for influenza.

However, according to the health department’s weekly influenza surveillance report, during the week ending March 6, it had laboratory tested nearly 38,000 specimens for influenza, of which 110 (or 0.3 percent) were positive.

Russo also believes that next flu season, when hopefully COVID-19 will be no longer considered a pandemic, that a number of individuals will continue to wear masks during cough and cold season whether there is a mandate to or not.

"There's no question there’s in my mind that a certain segment of the population is going to continue this practice to protect themselves not only from influenza, but also from those pesky respiratory viruses that bother us each winter season as people in Asia have been doing for years with good success," Russo said.