New York bail reform: What if you just don’t show up in court?

Prosecutors are just beginning to find out about the options they have for those who might flaunt the system under New York bail reform. 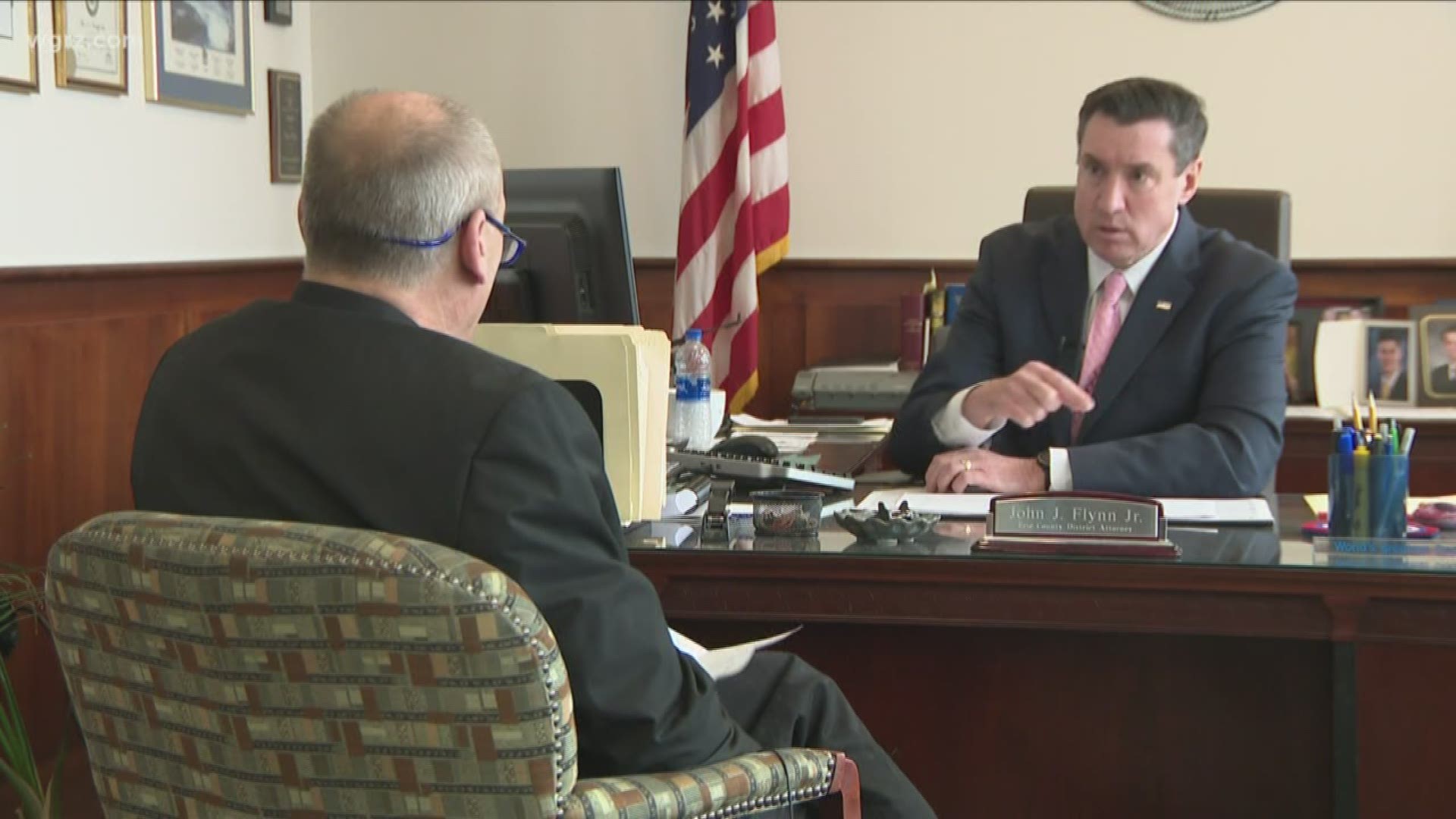 BUFFALO, N.Y. — An article in the Jamestown Post Journal reports that since the state’s new bail reforms went into effect at the start of the year, there have been 107 occasions when people charged with crimes for which bail can no longer be set have failed to show up in court.

Buffalo’s City Court Clerk told 2 On Your Side they don’t keep track of such numbers, and the Office of Court Administration (OCA), which oversees all courts in Western New York, also had no numbers available.

Drilling down on numbers

"We are meeting tomorrow with representatives in OCA that cover the justice courts, and we're going to see if we can't devise some kind of a system to track it," John Flynn told WGRZ on Wednesday.

“I am also placing a call to city court, so I am in the process of seeing if we can't drill down on this and actually start to get numbers."

Under bail reform, there is now lengthy list of charges, including felonies, for which a judge cannot set cash bail.

Instead, the person charged is given an appearance ticket.

Prior to bail reform, if someone released without bail didn’t show up for a scheduled court appearance, judges often issued bench warrants for their arrest.

But now there is a 48-hour “grace period” before such a warrant can be issued, according to Flynn, during which time authorities must make every effort to contact the person and remind them to come to court.

“We have to give the opportunity for that person to appear, and if they don’t, then a bench warrant can be issued,” Flynn said.

But even if someone is then brought in on a bench warrant, the consequences aren’t that severe.

“You walk out the door,” Flynn said. “The judge can’t hold you for the bench warrant or on the underlying non-qualifying offense.”

However, if a person continues to not show up, Flynn says there is a remedy for prosecutors.

According to Flynn, if someone fails to show up for court, prosecutors can then move for a hearing and attempt to prove to a judge that the defendant is “willfully and persistently” trying to avoid justice.

Flynn hasn't moved to request this type of hearing as of yet but figures it won't be long before he does.

However, he also notes that there's no case law, as of yet, to establish what is "willful or persistent" behavior.

Left up the judge, as well, may be the question of how many times someone would have to flaunt the system by not appearing in court before their behavior can be deemed as such.

“We don’t know the answer,” Flynn said. “In my mind it might be two failed appearances, but in a judge’s mind it might be three or four or more. I can’t control that. … All I could do is argue to a judge that two is enough.”

Offenders can still be jailed

Prosecutors can also push for a hearing to set bail on someone charged with a felony crime and released, if the person commits another felony while their case is pending.

Flynn’s office did this for the first time on Wednesday and was successful in securing bail for Sherman Price, who was charged with felony burglary in Cheektowaga, but who, after he made his initial appearance, allegedly committed several more burglaries.

“The bottom line is there is a lot of loopholes and ambiguity in this," said Flynn, who hopes state lawmakers who passed the elimination of cash bail for many crimes as part of Governor Andrew Cuomo’s package of criminal justice reforms, will close.

“We have between now and June to tighten this up a little bit,” Flynn said. “To perhaps allow a judge to factor in a person’s history of not coming to court and maybe having some discretion and factor that in. There are numerous tweaks we could make to make this better and I'm just hoping that this time around (legislators) listen to us as district attorneys and they listen to law enforcement and they allow our input. Whether that happens or not is up in the air.”

RELATED: Despite bail reform accused burglar ends up behind bars