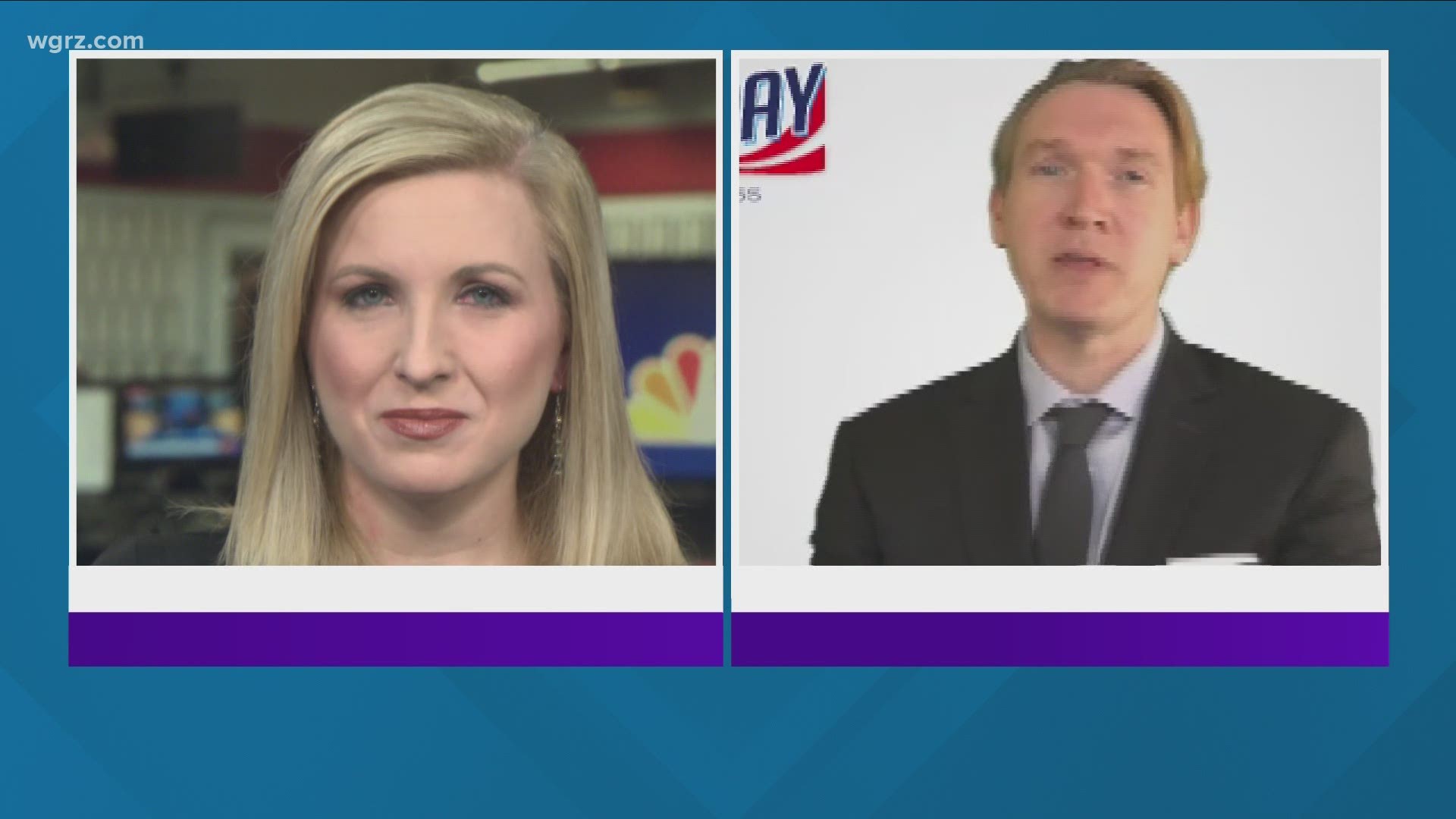 BUFFALO, N.Y. — 2 On Your Side is interviewing the two major party candidates for NY-27 ahead of the election.

Kelly Dudzik: "Democratic Challenger in the 27th District, Nate McMurray, joins me now. Nate, thank you for being here. And first off, I just want to let everybody know that we're also giving the same opportunity to Congressman Chris Jacobs. He'll be joining us on the Town Hall at 5:30 on Monday. So Nate, let's start with the obvious, the 27th District voted for Donald Trump by 24-points in 2016. The 538 house forecast has Jacobs easily winning and as "very likely" less than three weeks out to the election now. Your races in the 27th, so far, your two races have been much closer than that 24-point margin, but you're a progressive, so how do you win Republicans in the 27th over in order to beat Congressman Jacobs this time around?"

Nate McMurray: "Well, twice now, a lot of Republicans and Independents, and Conservatives have crossed over to vote for me. More than anyone else in the entire country, and they've done that because unlike my opponent, I am not a career politician. I speak my mind. I am sincere, and I've spent thousands of hours visiting with people in NY-27. I don't think he even knows where half these towns are. He just relies on the fact that he's Republican. And I think people know that, the people that do know him, realize he's someone that's been in office for a very long, long time with very little tangible to show for it and they know that I'm someone that's going to come and listen to them, whether they're a Conservative or Republican, and I am someone who is going to learn from my constituents. I believe you need to represent, truly represent, people that you're fighting for that you want to help lead in Washington. So, I am someone who will go and listen to them, and Chris, I don't think he's ever been to most of these towns. So, yes, there is that huge disadvantage in that enrollment, but we've proven twice that we've come closer than anyone ever thought we could, and we're this close again, so I feel very good about our chances."

Nate McMurray: "I think it's a really good question. First of all, Joe Biden is likely to win. We talked about the polls in the first question, the polls look very good for Vice President Biden. Biden is someone who said that I am someone you can trust and can believe in who is knowledgeable, and I look forward to working with him in Washington, D.C. If my opponent wins, and President Trump loses, which is, it's very highly likely at this point, he will have no friends left in Washington. He went so far to the right to please President Trump that he'll be the last one in the room, really. He'll be alone in Washington if he goes back. So, to the question, however, about Medicare for All, it's something I've always fought for because I believe every single American should have health care. I will do nothing to put your existing health care at risk. I refuse to even think about it. Right now, there is a Supreme Court case that President Trump is pushing to remove preexisting conditions. He offers nothing that is going to replace the existing health care system. He only wants to take away health care. He keeps saying I have a better system that's coming soon. It never comes. Just like an infrastructure never comes. He's all talk, and my opponent supports him. I will fight for health care for everybody in this region. I know how important it is, and if you look at my record, I have been very consistent. However, I'm open to figuring out ways to get to the ultimate goal of covering everybody. I'm open to that, and I'm open to working with hopefully our future President, President Biden, but what I am not willing to accept is the situation we have right now where those with preexisting conditions and thousands of people in our region do not have any health care at all. Remember, right now, we just lost, 900-thousand people applied for unemployment last week. Eight-million people since May have been moved into poverty in this country, and NY-27 has the worst job market in the country even before the pandemic. So, so many people either had their health insurance linked to their employment, and now they've lost their employment, and have no other option, and at the same time, the President is attacking the health care they have, so making sure everyone has health care is my priority. I am open to looking at the options. I believe, based on the data, that Medicare for All is the most efficient system."

Kelly Dudzik: "And, that's actually a good segue to our next topic. Job creation, you list it as one of your priorities on your campaign website. How do you get companies to relocate or grow in Western New York when it just wouldn't be fiscally responsible for municipalities to give tax breaks to companies in the environment we're in right now with the pandemic?"

Nate McMurray: "Well, we do have some strategic advantages here. We have a very close proximity to Canada. We have a strong agricultural sector, and if we have the right policies on a national level that make agriculture a national security issue, we treat it like a national security issue, we treat it like a priority, we can help that sector grow and prosper. Beyond that, we have to look at our strategic advantages, our location in the country with such close proximity to Canada. When I was a small town supervisor, I used that platform to attract Amazon. They were gonna come and build. There's things that, companies will come if they understand they have a good partner. Now, that deal died sadly because when I left office, there wasn't good partnership there to see it through, but I've proven that I can attract those types of employers to this region."

Kelly Dudzik: "What would you have done differently to seal the deal with Amazon to get them to move to either Grand Island, or somewhere else in Western New York?"

Nate McMurray: "Well, one of the biggest problems with the Amazon deal is what they did is they nitpicked them, and they asked them, not only were they not giving them a tax cut, they were demanding, they had a wish list of things they wanted Amazon to pay for that were just extreme that made the deal untenable. I think that you have to be a good partner with business. You can not let business take advantage of a region or of a municipality, but at the same time you need to allow for the breathing space for there to be a partnership. And, I think that the Amazon deal they demanded too much and they nitpicked them to the point where they said this is pointless. Now, I will be calling Amazon my first day in office to find some other place in Western New York where we can get them their facility built because it will provide thousands and thousands of jobs to the people in this region."

Kelly Dudzik: "If you win, and President Trump wins a second term, you've made your opinion of him very clear about him, how would you work with Republicans so that there isn't gridlock in Washington, especially if Republicans keep control of the Senate?"

Nate McMurray: "I don't care who brings forward a deal if it's going to help Western New York. I'll support it. I think the number one thing you need to learn in business, and I was in business for my entire adult life, I was not in politics, is that you don't close the door to opportunity, even if it's somebody you don't like personally. I just don't think President Trump has done anything. He's talked a lot, but he hasn't delivered health care, he said he would, he said he would repeal and replace, he's nothing to replace, he's attacked preexisting conditions, he has obviously mishandled this virus. The only thing he did when he had control of the House, he controlled the Senate, the Congress, and the Executive Branch, and the only thing he did was pass a tax cut that gave 85-percent of the benefits to one-percent of the population. So, instead of fulfilling all these promised he made, he only passed a tax cut to help the most wealthy Americans, and that's a strategy that they've tried for a long, long time. However, if President Trump came forward with an infrastructure plan like he's been promising for four years, I'd be all behind him. If he did what he promised in the past, which is to pass some form of health care plan that was going to cover all Americans, I'd be all behind it. If he did like he's promised in the past, said he was going to provide COVID treatments for free to all Americans, I would be supportive of that. He hasn't done any of these things. He's done nothing on infrastructure. He has done nothing on health care, and he's had four years. But, I'm not someone who will vote against the interest of the people of this region. I will always put the interest of the people of this region first, and if there's an opportunity to work in a bipartisan nature, I will do that."

Kelly Dudzik: "Nate McMurray, thank you for joining us for our town hall today."

Kelly will be interviewing Congressman Jacobs Monday, which you can watch during our '2 on your side' Town Hall.