In a statement released this morning, New Era says it is considering closing its manufacturing plant in Derby in March. 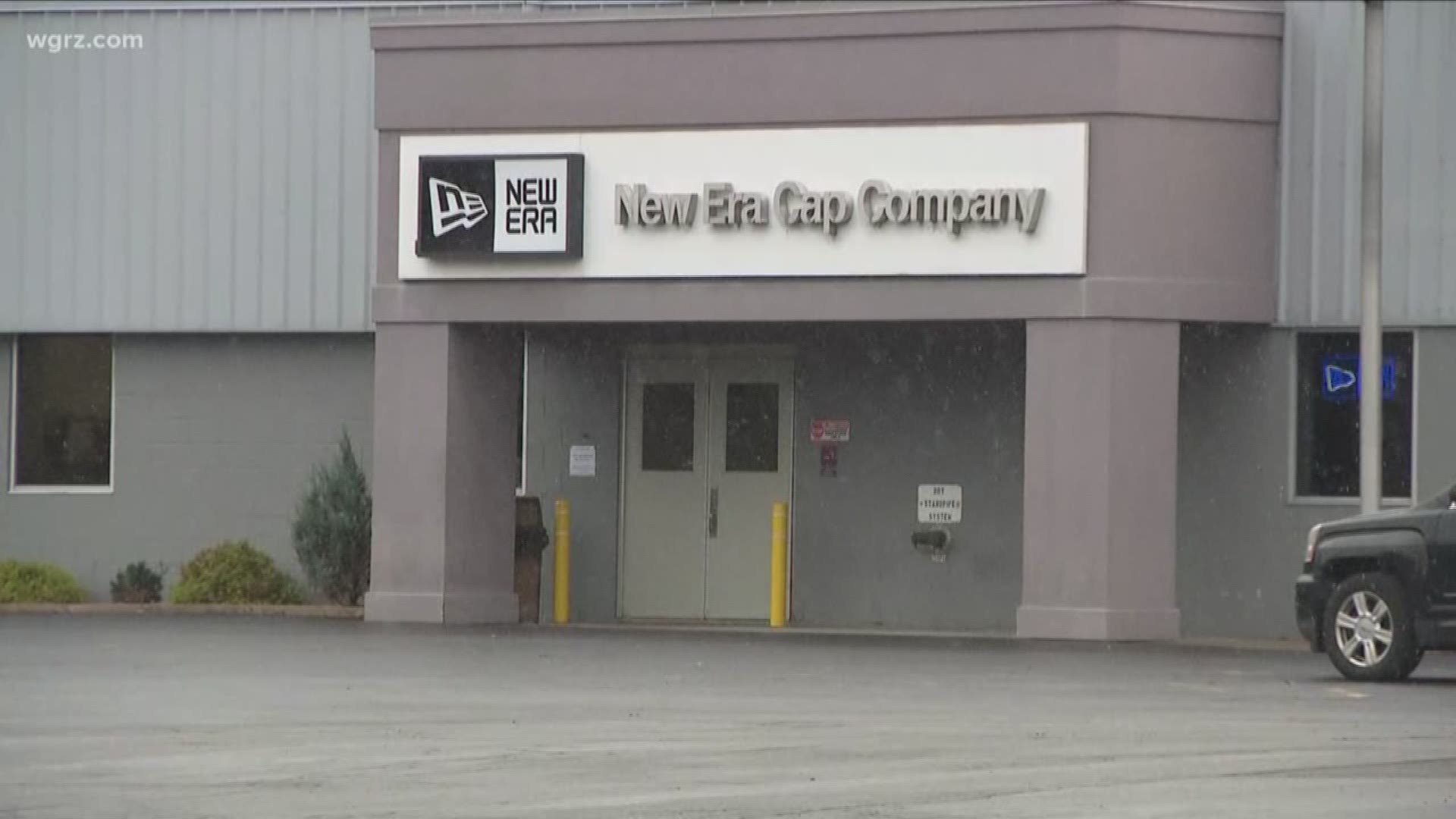 BUFFALO, NY - In a statement released this morning, New Era says it is planning to close its manufacturing plant in Derby in March.

The plant employees 219 workers, who were given the news this morning.

End of an Era, at New Era

In an average year New Era was making about 2 million caps in its Derby plant, which has been in operation since the 1960s.

They include the ones worn by major league baseball players on the field.

But that's' only a fraction of the 65 million caps they produce on an annual basis, at plants which they do not own but contract through around the world to make their products.

The advantage there, you can make a lot more hats,…and that there are no employees to directly pay.

The Derby plant was the only one making caps, which the company owned and operated, and the company says it's no longer viable in today's global economic to own a plant to make the caps.

Instead, it will farm outmost of the remaining majority of its manufacturing just as its competitors do.

In a statement, company CEO Chris Koch said "Even as other sports apparel brands moved away from running their own manufacturing plants, we continued making caps at our facility in Derby. But I have an obligation to our employees, partners and customers to ensure the long term success of this company and we need to keep pace with changes in our industry."

"This is particularly disappointing in that it's a Buffalo started and rooted company," said Thomas Kacharski, CEO of Invest Buffalo Niagara, which serves as a modern day chamber of commerce for the Western New York region.

New Era also supplies caps for the NFL and NBA. However, it's contract to provide caps "worn on the field" by Major League baseball players, and which runs through 2030, stipulates that they be made in America.

To conform to that, the company will now make those caps – and just those caps--at its subsidiary firm, 5th and Ocean Clothing Company" at its facility outside of Miami which New era acquired in 2009.

This will leave more than 200 Western New York employees out of work.

Kacharski, however, preferred not to be downcast.

The Future for Workers

"These technically trained folks are probably going to be in demand by other employers in the region and we will certainly make use of marketing that property as it becomes available next year and certainly won't have a shortage interested companies looking to occupy it," Kacharski said.

New Era says it's prepared to offer the affected employees benefits and severance at levels beyond what is required in their current union contract.

They are represented by the Communications Workers of America, which has not returned calls for comment.

Before You Start Tweeting:

While New Era's CEO expressed concern over the 'Trump Tariffs back in July, the company says those tariffs didn't have the impact they initially feared, and had nothing to do with this decision, which they also note, they had begun considering back in January.

Read the full news release from New Era below:

Today, New Era Cap Co. notified the Communications Workers of America(CWA) that it is considering the discontinuation of operations at its Derby, NY facility, effective March 2019. This contemplated decision is part of the Company’s ongoing effort to more closely align its business model with its competitors in the global sports, lifestyle and apparel industry by moving away from owning and operating manufacturing plants.

“This is extremely difficult for me,I grew up in Derby and worked in the facility, which has had a long, productive history with the Company,” said Chris Koch, CEO of New Era. “Even as other sports apparel brands moved away from running their own manufacturing plants, we continued making caps at our facility in Derby. But I have an obligation to our employees, partners and customers to ensure the long-term success of this company and we need to keep pace with changes in our industry.”

New Era would continue U.S. production of the caps that Major League Baseball players wear on the field of play. Going forward, this would be done at New Era’s existing facility in Florida, where the Company has production for its 5th & Ocean label. Otherwise, the production currently done in Derby would be absorbed by our existing global supply network.

New Era remains committed to Western New York. In 2006, the Company moved its headquarters to Buffalo and was one of the first anchor tenants of the revitalization of downtown Buffalo. Over the last decade, New Era has had impressive job growth at its Delaware Avenue headquarters, where 337 people currently work. The Company’s headquarters is not affected by the contemplated decision, and the Company expects to further grow its HQ footprint as it moves more aggressively into areas like e-commerce and social marketing.

In accordance with the collective bargaining agreement with CWA Local 14177, the Company has informed the union of its contemplated decision and expects to meet with the union to discuss the matter in the coming weeks. New Era is prepared to offer the affected employees benefits and severance at levels beyond what is required in the current agreement.

Erie County Executive Mark Poloncarz says he is disappointed in the decision and has reached out to New Era about trying to preserve the jobs in WNY. Here is his statement:

“I was very disappointed today to learn of the impending closure of New Era’s Derby manufacturing facility, a move that hurts more than 200 families here in Erie County,” Poloncarz said. “New Era is such a homegrown success story that its name now adorns the professional football stadium owned by the people of Erie County. As such, the announcement of the closure took my administration by surprise because no one from New Era contacted my administration or the Erie County Industrial Development Agency to notify us of this decision or to explore potential ways to keep New Era employees working in Derby. Nevertheless, I have reached out to New Era CEO Chris Koch directly to determine if any action can be taken to preserve these jobs. I hope there is still time to avoid this outcome and will work with New Era, should they choose to do so, to find a solution that is better for Erie County workers.”