A well known local Catholic priest in Buffalo, who is suspended for allegations of sexual abuse, is now accused by a family member of abuse. For the first time that family member is sharing his story. 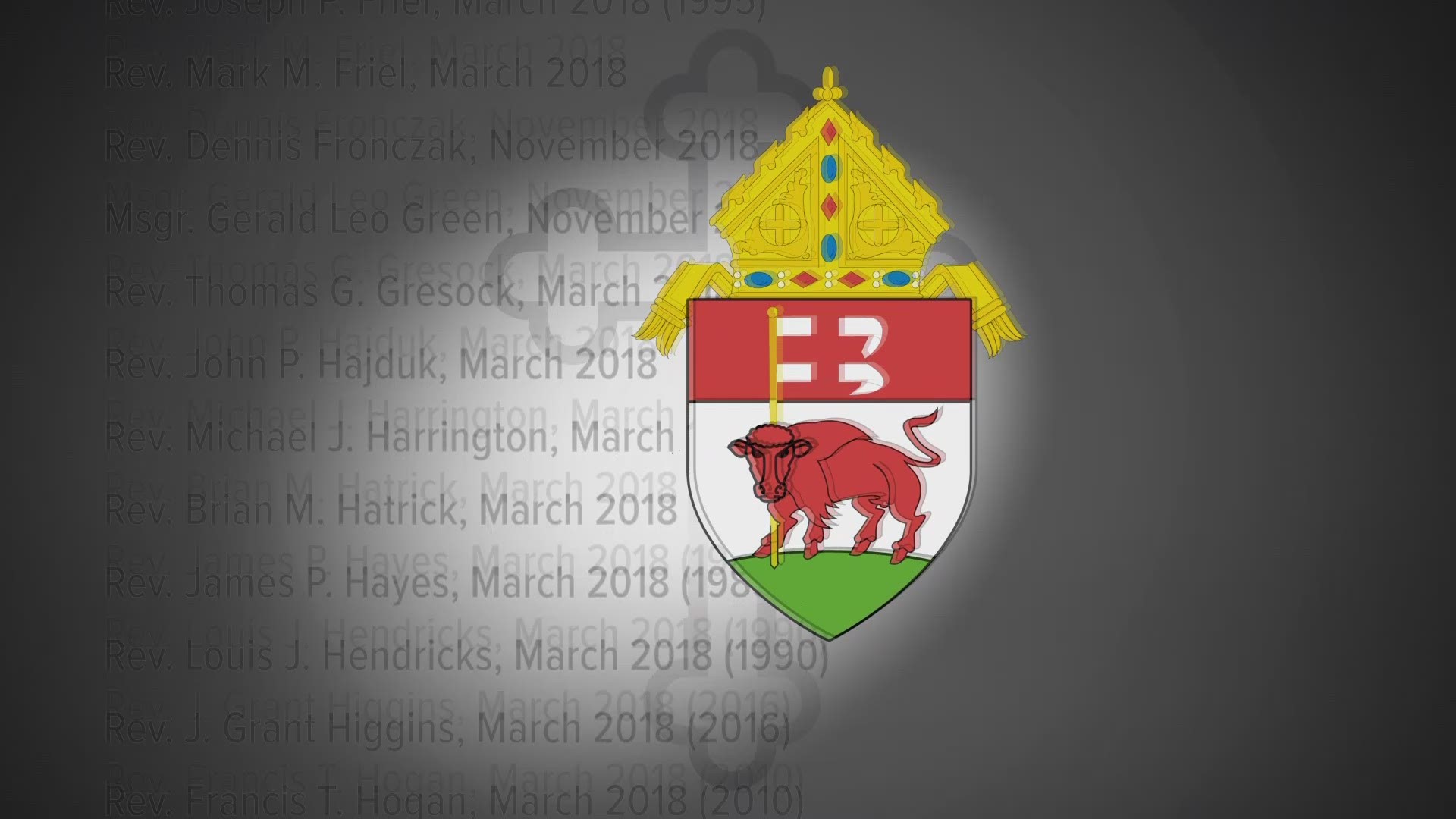 Reverend Arthur Smith, known by many in Buffalo, inside and outside the Catholic Church, as Father Art, is accused by his nephew of sexual abuse. Three members of the family tell 2 On Your Side that Father Smith abused someone in his own family.

Ryan Cooley, now 33, says he was 9 years old when he was abused by his uncle. Cooley recalls it happened in a family member's North Buffalo home in a bedroom. Cooley could not hold back tears while telling a story that has bothered him for nearly his entire life.

"I wanted to crawl under the bed," Cooley said.

During the one and only encounter, Cooley said his uncle Father Smith sat him on the bed and said, " 'You're growing up so fast.' He just started like rubbing my back, stuck his hand up my shorts and just kept touching me. He knew that I didn't want that, and from that moment on he disrespected me."

Cooley never told anyone about the abuse until a couple of years ago. He was raised in a Catholic family in South Buffalo.

"In our family growing up, religion was like, my grandma demanded respect, you didn't dare disrespect her or the cross," he said with conviction.

In 2011, Father Art Smith was placed on leave by the Diocese when the mother of male student  at St. Mary of the Lake School said the priest sent inappropriate Facebook messages to her son.

Father Smith was eventually suspended by then Bishop Edward Kmiec. He was reinstated by current Bishop Richard Malone. The Diocese has acknowledged that Father Smith was sent away for treatment.

Father Art Smith's name is on the list of priests with substantiated claims of sexual abuse of a minor within the Buffalo Diocese. The Bishop has admitted it was a mistake to keep Father Art Smith in limited ministry.

Smith under Bishop Malone was allowed to work in a nursing home and assigned to a youth conference, where he heard confessions and be a cruise ship chaplain.

Cooley says he never wants to see his uncle again. However, he has noticed his uncle near his workplace and other areas on Buffalo. "He has no moral compass, I honestly believe he preyed on the fact that I didn't have a father in my life."

Cooley's parents divorced when he was young. His mother, Mary Smith, is Father Smith's sister.

His sister shared a letter Father Smith sent to his family a few years ago detailing "difficult years."  He explained why he was no longer working at Brothers of Mercy. Here's what he wrote in the letter: "BECAUSE I WOULD HUG ONE OF THE YOUNGER BROTHERS AFTER MASS IN THE MORNING AS I WAS LEAVING. IT WAS ALWAYS ONLY A FEW SECONDS, BUT APPARENTLY HE OR SOMEONE DIDN'T LIKE IT. I THOUGHT THAT HE LIKED ME AND I LIKED HIM. SO THAT'S OVER."

He also wrote "THE BISHOP WANTS ME TO GO FOR SOME MORE COUNSELING IN 2014."

Father Smith's sister told 2 On Your Side's Claudine Ewing, "He sent this letter to everyone in our family wanting us to try to understand what he was going through, but it doesn't make a whole lot of sense he would put it out there."

In the lengthy letter, he also talked about the incident at St. Mary of the Lake School  that led to his suspension. It involved a Facebook message to  boy.

"WHAT I DID WAS WRITE AN EMAIL TO A JUNIOR HIGH SCHOOL STUDENT WHO WAS HAVING DIFFICULTY AT HOME. HIS MOTHER WITH HER THIRD LIVE-IN BOYFRIEND WERE FIGHTING AND ARGUING ALL THE TIME AND HE HAD WRITTEN ME ASKING FOR HELP. I WROTE HIM BACK A TEXT SAYING SEVERAL THINGS BUT ENDED WITH "luv u" AND THAT'S WHAT DID ME IN. JUST THOSE FOUR LETTERS. THERE WAS NOTHING MORE THAN THAT."

Father Smith also wrote about his father in the letter to the family. He indicated that his father never gave him love or assurance. "I STRUGGLED WITH THAT ALL MY LIFE. I STRUGGLED WITH MY SEXUAL ORIENTATION. LIVING A CELIBATE LIFE IS A VERY LONELY EXPERIENCE."

Father Art Smith recently had a GoFundMe page, soliciting money. It has been taken down, but his family remains puzzled about the first paragraph that was on the page, which said, "The Bishop of Buffalo publicly accused me of something that I did not do 43 years ago. I have suffered at his hands for 6 years now and he is unrelenting."

The family wants to know what the incident was 43 years ago.

Ryan Cooley has endured personal struggles, but he wanted to tell his story and hopes it may help someone else.

Father Art Smith was asked repeatedly to comment or be interviewed for this story. He only communicated with Claudine Ewing via text message going back to November. He declined to do any interviews by phone or on camera.

In one of the text messages, he said he is "disgusted to the nth degree I hate lies." The offer is still available for him to do an interview.