The USS Little Rock was commissioned in Buffalo in December of 2017, next to its namesake at the Naval Park. 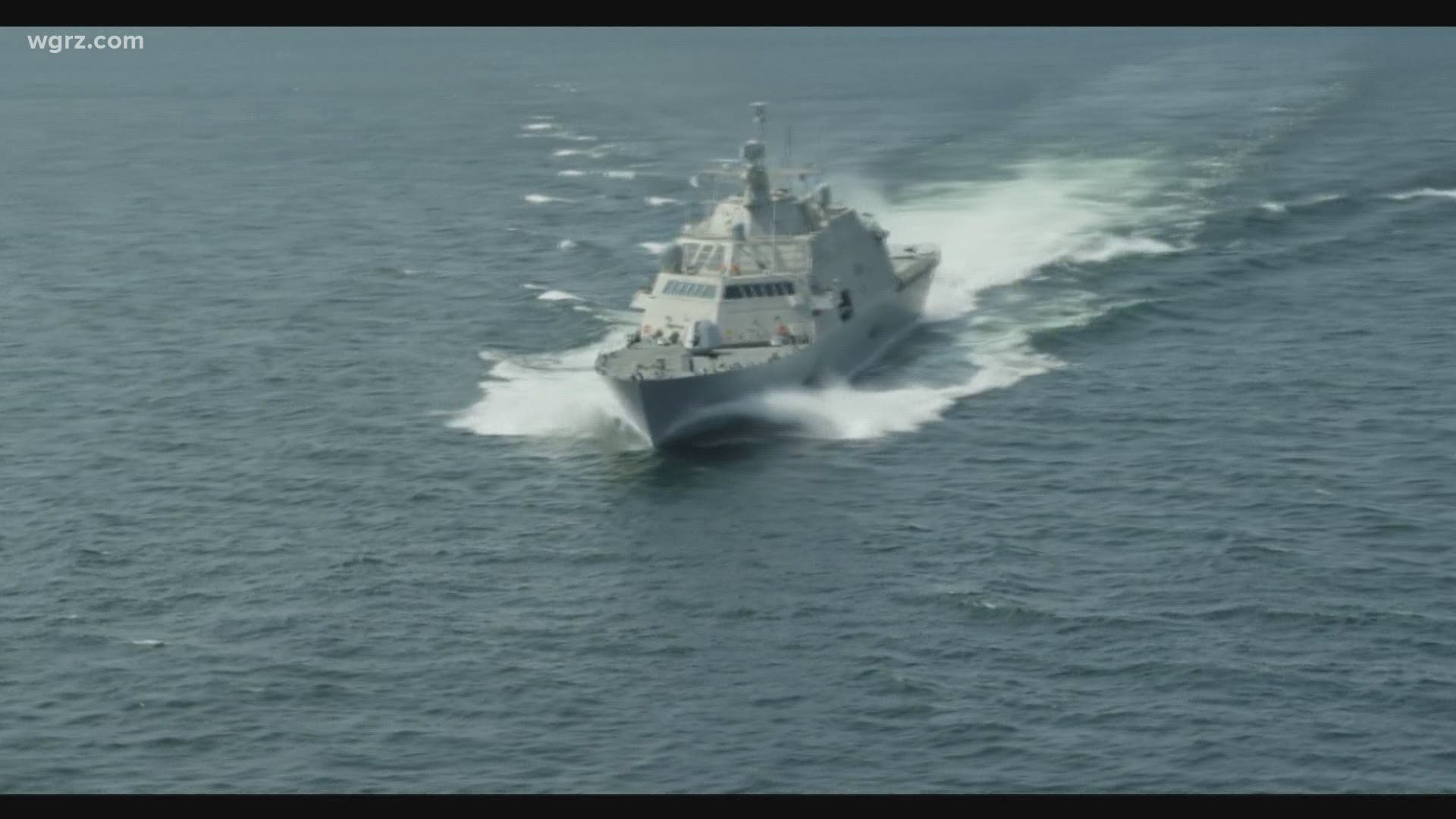 BUFFALO, N.Y. — Back in December of 2017, the City of Buffalo had the unique honor of hosting the ceremonial commissioning of a new Navy warship known as the USS Little Rock. It marked the first time in Navy history right near its namesake ship, which is moored at the Buffalo and Erie County Naval and Military Park.

It cost taxpayers over $350 million to build. But now the ship's future is unclear as the U.S. Navy may try to cut it from the fleet because it has technical problems.

We know the new USS Little Rock is now based in Florida, running anti-drug smuggling missions off South America and in the Caribbean Islands.

But what we didn't realize is it still has major problems, along with other ships like it in the Littoral Class Ships line (LCS ships are for littoral waters meaning more shallow and closer to shore) in the linkage of its unique propulsion system that makes it go so fast and turn on a dime like a jet ski version of a warship.

2 On Your Side spoke with Sebastien Roblin who is a military writer in Brooklyn and contributor to the NBC THINK opinion site who told us: "It was billed as being very affordable and efficient and the program has been a catastrophe. That type of ship has been characterized by a very high frequency of propulsion breakdowns."

So the Navy decided in its new budget plan to pull it from active duty after just three and a half years in service citing that propulsion problem for LCS-9 as the Little Rock is officially known.

The official wording in the Pentagon FY 2020 Budget proposal states "Decommission four Littoral Combat Ships (LCS) Internal Navy guidance on the Inactivation, Retirement, and Disposition of U.S. Naval Vessels governed the divestment strategy. There were several reasons that led to the decision to divest of these ships. LCSs 7 and 9 have experienced major propulsion train casualties (known combining gear issue) and will incur significant associated repair costs. Decommissioning these two ships includes a cost avoidance strategy, so that scarce maintenance funding can be allocated to the highest priority ships. The replacement capability is the FFG 62 Constellation class of ships."

Now engineers say they do have a way to fix this problem for the Little Rock. but the question is will people in the Pentagon really listen?

Chris Cavas is a Maryland-based naval warfare journalist and commentator. He points out it may be worth it to do that repair work. He also says the LCS class of ships has had kind of a bad reception from some in the Navy since it was designed in the early 2000s.

And with the ship's cost of again nearly $400 million from its Wisconsin shipyard, Cavas feels that fix may be worth it in the long run because it might cost more to replace it with a newly designed class of ships. He also says LCS ships may still have value for Navy combat commanders  especially with the growing threat of China's fleet in and around the islands of the South China Sea.

Cavas bluntly puts it this way. "I think it's an unbelievable waste to not upgrade LCS 9. I think it's bad management on the part of the Navy."

So will it survive as Congress makes the final decision with shipyard work also on the line in some Congressional districts? Roblin says, "I think they'll probably be saved by Congress in my view from what I've read about commentary as well. Congress is also expected to actually order additional ships that the Navy didn't include in its budget."

So perhaps the new USS Little Rock may yet stay afloat in the choppy seas of Pentagon politics.