Jake Kohut is with the 257th Army Band. He was one of the first National Guard soldiers to deploy on the Capitol perimeter. 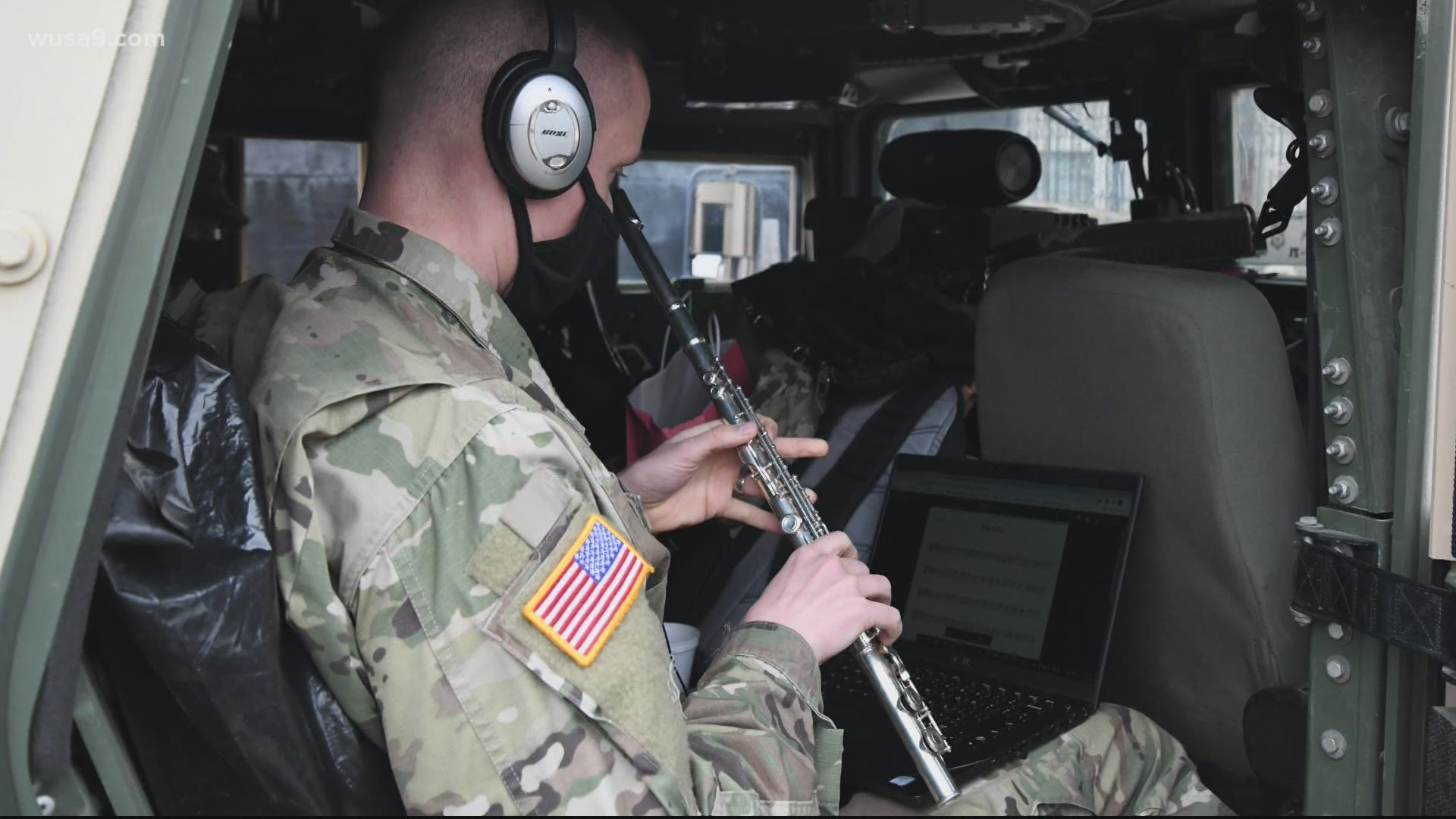 WASHINGTON — Dr. Jake Kohut was in the kitchen with his wife and young son last Wednesday watching the chaos unfold at the Capitol building. He had a suspicion that he would play a role in the aftermath.

Sure enough, his phone vibrated with a message around 6pm that evening. His DC National Guard unit was being called up and needed to deploy to secure the U.S. Capitol building.

That created a bit of a dilemna for Kohut, a doctor of music composition and elementary school music teacher at Canterbury Woods Elementary School in Annandale, Virginia.

He could have easily phoned his principal to announce his need to deploy and ask that arrangements be made to cover his class. Kohut never considered that as an option.

"There's been a difficulty getting (substitute teachers)," Kohut told WUSA9.

"It's also a difficult time for us in the band world. We're trying to sign these kids up for band in middle school and the last thing that's good for recruitment is the band teacher up and leaving for who knows how long."

Kohut packed his bags and headed towards the Nation's Capital. He added his "chief teaching instrument" to his things and wondered aloud on the drive into DC how he would simultaneously do his duty and support his kids.

This is what a hero looks like. A member of the DC National Guard, our band teacher Dr. Jake Kohut has been working around the clock since Wednesday to protect our nation’s capital. And between shifts, he is dedicated to CWES students, teaching from DC. @fcpsnews @FrostsPrincipal pic.twitter.com/nsDRuV08OQ

It turned out, last Thursday and Friday, he was unable to make time for his students because of his military responsibilities. But he returned to class, via Zoom, on Monday. And he didn't miss a day all week.

"The kids are excited," said Sgt Kohut. "It's been something that's new and fresh for them."

Kohut was among the first National Guard soldiers to arrive at the Capitol complex last Thursday. He stood along the perimeter before the fencing was erected.

"It kind of felt like we were a part of history, but it also felt like it was a very long day," Kohut said.

The next day, Kohut was among a group of soldiers who were able to meet acting Secretary of Defense Chris Miller who was touring the Capitol grounds and talking with National Guardsmen.

Since then, Kohut has been splitting his time between guarding the Capitol and teaching his music class, on Zoom -- with a mask on while sharing a Humvee with other soldiers.

"The flute does fit in my backpack, but it's not known as the manliest of instruments," Kohut said with a chuckle. "There is a guy who's really good at flute in the unit. I just make sure he's not around when I'm teaching."

"The boots are there... with the uniform. It's always ready to go. That's just who we are." #Inauguration2021 https://t.co/dbgBUcoFNK

After his school tweeted about his story, Kohut has become a local music celebrity. Views of bassoon playing on his YouTube page have multiplied and he's ecstatic about using the publicity to increase recruitment for his middle school band.

As a member of the 257th Army Band for the past 11 years, Kohut has never deployed abroad. He's part of a National Guard force numbering close to 25,000 in DC.

A citizen soldier and guardian of music's future. Kohut says it's all in a day's work.

"I've been doing both for 11 years, and they fit pretty well together in my opinion," Kohut said. "I love doing both, it balances life out."

RELATED: 'They gassed a lot of their own officers' | Man describes chaos as Capitol Police stricken by chemical gas release during riot