Wayward yellow umbrella soars for two miles over West Seneca. But what was lost was found, and so was a newfound friendship. 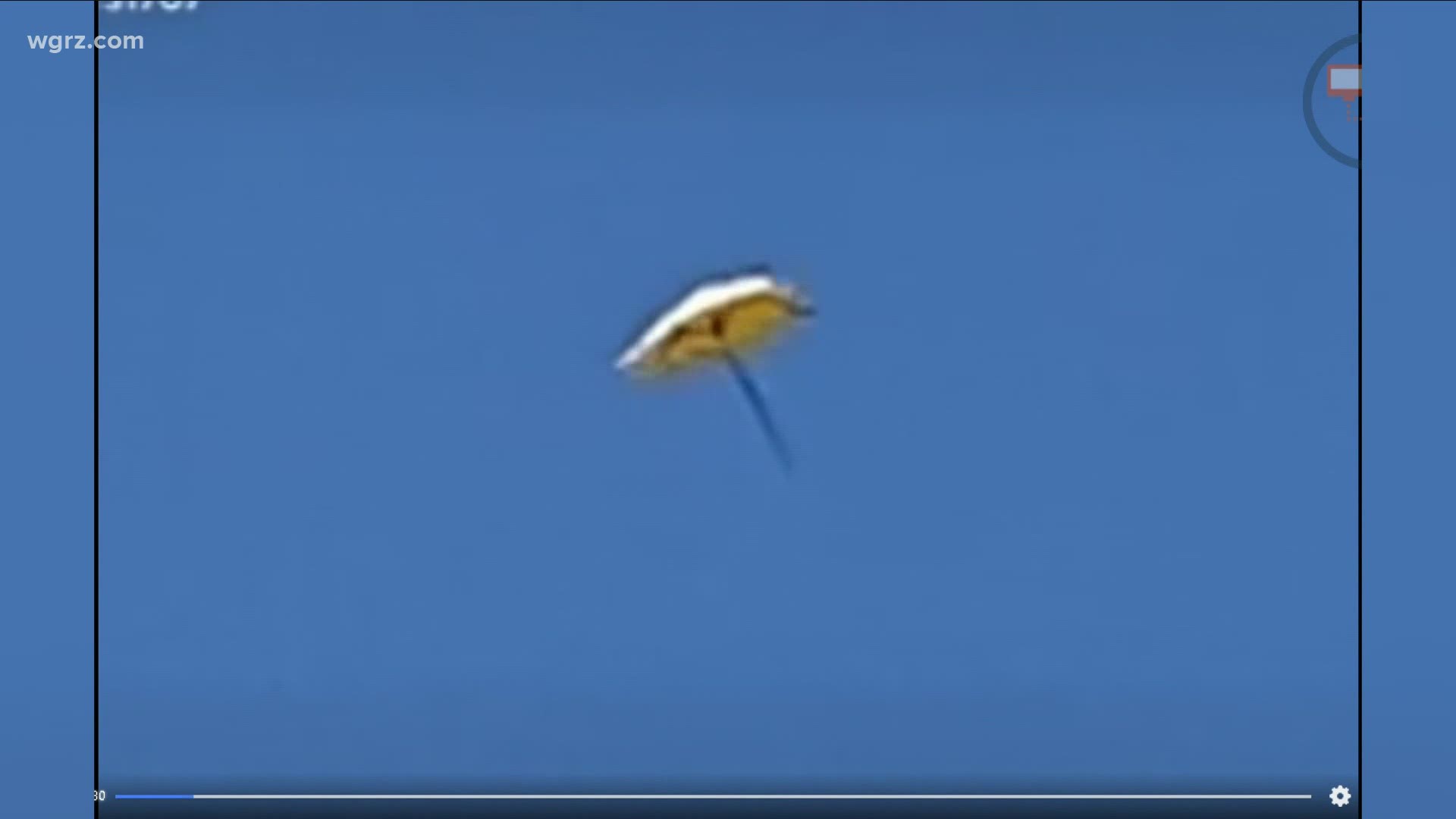 “You just can’t make this up,” agreed Lauren Rozmus.

What the two West Seneca residents are talking about is an unusual event that turned strangers into friends, after the loss of an umbrella.

"The curtains started going crazy and we noticed the umbrella take off out of the holder," he said, referring to a large yellow patio umbrella, which covers a table on his deck.

Up Up and Away

He rushed out of the house to hear a neighbor tell him that the umbrella had flown over the top of his house, and then Melohusky watched as it went up, up, and away… eventually disappearing over the tree line.

“It was at least 200 feet in the air, probably more,” he recalled. “And it just floated away out of the neighborhood and then was completely gone.”

The big yellow umbrella was seen by several other residents around West Seneca, including Andrew Bork who captured it on cell phone video soaring aloft, and who at first thought it was a stray kite.

Joe Rozmus Jr. caught site of it while driving and thought at first the large yellow object might be part of an aircraft.

“I followed it like one of those storm chasers,” recalled Rozmus.

As he was driving along Center Road, he notice another man crossing the street, and rolled down his window to tell him about it.

“I stopped and told this gentleman, ‘look you probably think I’m crazy, but you gotta look up into the sky and check this out because nobody’s gonna believe this,’” Rozmus recalled the man looking up and agreeing that he’d never seen anything like it.

Rozmus tracked the umbrella to the Birchwood Apartments on Center Street where he says it landed on a roof of an apartment building before tumbling to the ground.

The umbrella was more than two miles from where it initially took off from Melohusky’s house.

As it was not far from where he lives, Rozmus gathered it up and brought it home. Not long after, accounts of the flying large umbrella began to be posted on a West Seneca community page on Facebook, with additional pictures and video.

That prompted Rozmus’ wife, Lauren, to post that the couple had recovered the umbrella.

“I posted that we had the umbrella and that whoever owned it could get it back,” she said.

Later, she received a private message from Melohusky, advising that it was his and asking how he could get it back. But not knowing Melohusky, Rozmus had some additional questions.

“Sort of like recovering a lost dog, and having someone claim it, I asked if he had any pictures of the umbrella to prove that it was his,” Rozmus said.

“I had one,” recalled Melohusky “Which I took the day before during my son’s birthday party, with the umbrella in the background.”

When all realized how far the umbrella had traveled, they were amazed to say the least.

“First of all, that day, April 8, was when we had a record temperature of 84 degrees,” said Storm Team 2 Chief Meteorologist Patrick Hammer.

Hammer explained that in Western New York, when there are unusually warm temperatures in the early spring, it is often associated with a strong airflow from the south.

“You can’t get that warm without it… it’s a key ingredient,” he said.

And while the day was breezy, Hammer further explained how a sudden burst of wind can occur.

"When the air gets that warm, under the right circumstances, you can also get something called mixing, which means stronger winds up high can sometimes be carried down toward ground,” he said. “Think of the turbulence of a boiling pot of water. Air is not only moving sideways, but up and down as well.”

According to Hammer, with just enough lift to launch the umbrella up above the treeline, it could then catch a stronger current, and be launched like a sail.

While pleased to have his property back, Melohusky was even more delighted that the situation caused him to be introduced to Lauren and Joe Rozmus, with whom he’s struck up a new-found friendship.

As Lorraine wrote in a recent Facebook post about the umbrella, “cheers to new friends and the way we meet them.”

“When I think about it,” said her husband, “this is more than about an umbrella. It’s really about the little things that can bring us back together as a community, which is something I think we all need right now.”

Click on the video player to watch our story from reporter Dave McKinley and Photojournalist Bill Boyer, and includes video taken by Andrew Bork and Sarah Hageman.