#KellyTough made a resurgence on Thursday after the Kelly family revealed that Jim is once again battling cancer. 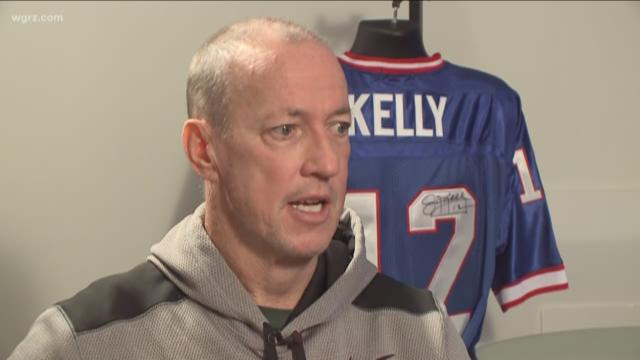 BUFFALO, N.Y. – Jim Kelly’s cancer has returned, and the outpouring of support from the Western New York community began as soon as the Kelly family released its statement Thursday.

2 On Your Side spoke with the founder of 26 Shirts, who is a long-time supporter of Hunter’s Hope, about how fans are once again rallying around the Kelly family.

"We love Jim Kelly. He is Buffalo," said Del Reid of 26 Shirts. "He symbolizes so much about what makes our city great."

Reid was not surprised at all by the "Kelly Tough" hashtag's resurgence Thursday.

"The Kelly Tough hashtag which you hadn't seen in a while became a lot more prominent right away. A lot of NFL personalities, a lot of NFL teams, a lot of fans, a lot of just, you know, Bills fans started tweeting all their love and prayers and everything towards Jim and his family," says Reid.

The Bengals tweeted, "Sending our thoughts and support Bills fam. Keep fighting!" The Super Bowl champs retweeted the Bills with the hashtag "Kelly Tough." And, the Patriots tweeted "sending lots of love from New England."

Reid says that while Jim Kelly is one of the big symbols of the Bills' glory years, to him, it's much more than the wins on the field that make that team such an important part of the Western New York community.

"They created so many for us, not even as Bills fans, but as just people so we kind of, we have a little bit of a debt of gratitude for all the great memories that we're able to share with our families and our friends," says Reid. "The love for Jim Kelly will never be extinguished. It will always be there, and when moments like this happen, it's good. Bubbles right up to the surface that people are going to show their love."

Reid says he had a lot of people asking about the "Kelly Tough" wrist bands from four years ago on Thursday. He just sold out of them last month, and the company he used in 2014 went out of business. He designed new ones and found a new company. Proceeds will once again benefit Hunter's Hope.

There are many resources here in Western New York to help all families impacted by cancer. Roswell Park has an entire Supportive Care Department that works with oncologists to help patients with emotional and psychological care.

Roswell is also starting a free mindfulness program to help reduce pain, anxiety, and depression felt by patients and their family members.

"A lot of it is just talking things through, and answering a lot of questions, and there's a lot of fear of the unknown so if you sit and take the time to find out what's bothering them, a lot of it can be relieved," says Amy Case, M.D. F.A.A.H.P.M.

The program starts March 8 and runs through April 12.