Boy loses $100 bill in Target, but gets an unexpected surprise from strangers

An 8-year-old had to learn one of life's hard lessons after losing his $100 bill, his life's savings. Thanks to the kindness of strangers, his luck turned around. 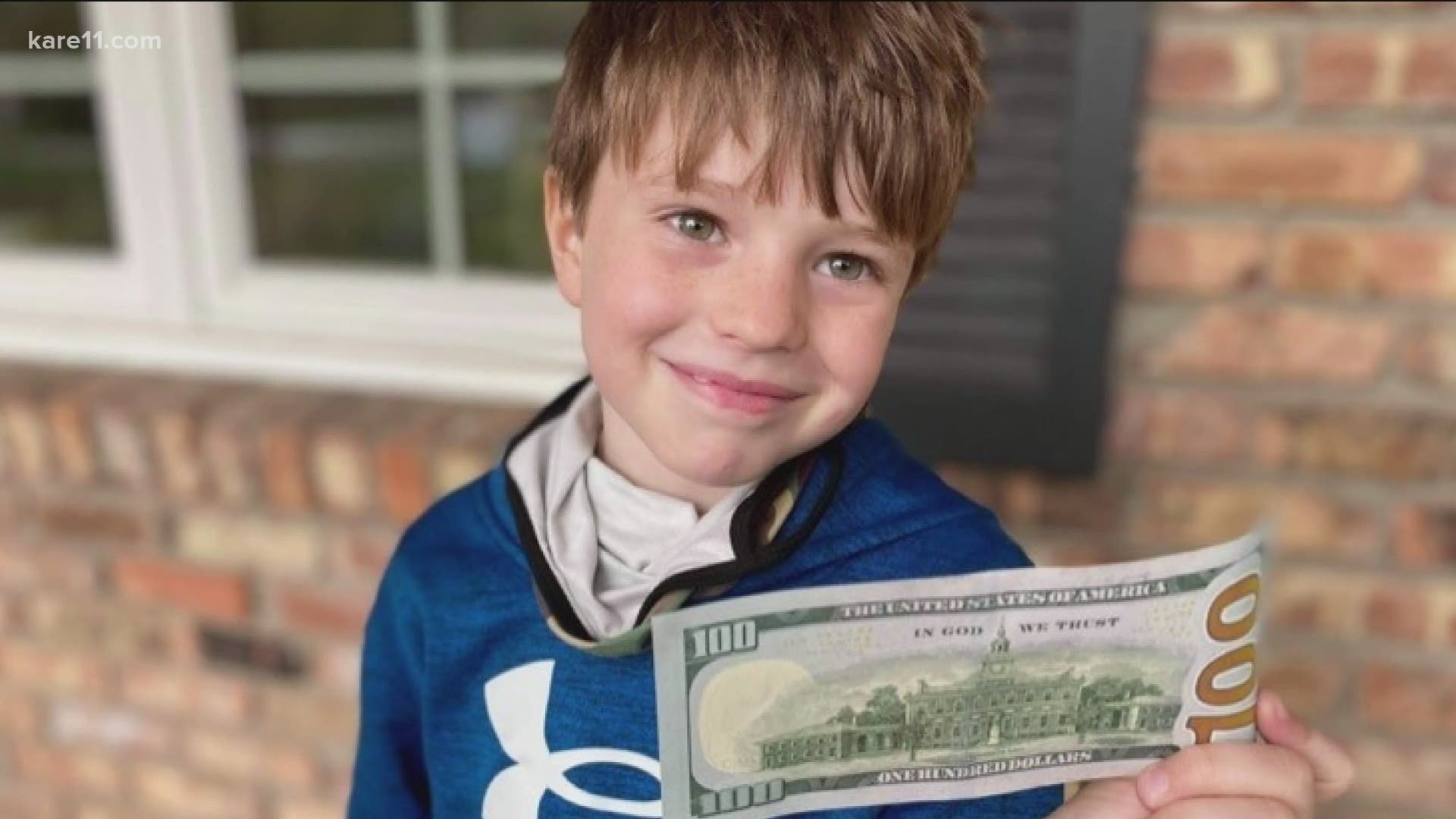 PLYMOUTH, Minnesota — We all had some sort of piggy bank, coffee can, or mason jar that we filled with our allowance as kids. Now imagine the excitement of finally turning in every penny, nickel, dime and dollar you've saved over the years only to lose it all in a single day.

That's exactly what happened to Oscar Thompson, a 8-year-old boy from Plymouth, who had to learn one of life's hard lessons.

"He would wash windows, mop the floors, vacuum, dust, clean up his room," said Oscar's mom Carrie Kehnle, who tells us after years of hard work and chores what Oscar calls his  "treasure chest" was finally full.

"Quarters, nickels, dimes, other coins, lots of dollar bills, and he always wanted to have a hundred dollar bill... so we went to the bank together and he exchanged it," said Carrie.

Oscar carried around his crisp Benjamin like a badge of honor.

"He was really excited," said Carrie. "He liked to show it to all of his friends and his grandma, and carrying it around everywhere."

It was after a trip to the Plymouth Target that Oscar noticed something was missing.

"As we were walking out, I guess the money fell out of his pocket somewhere either from the checkout to the door or in the parking lot," said Carrie.

Oscar himself, wasn't pleased. "I felt angry and mad!"

The 100 bucks was gone. A hard lesson for any kid to learn. So, Carrie decided to use the power of social media.

"I knew it was a long shot but weirder things have happened," said Carrie. "I posted a message in the Plymouth moms group and asked to see if anyone found a $100 bill floating around the Target parking lot and nobody had of course and one of the moms said OMG this is awful I would love to help Oscar recoup some of his money... can I send you the money via Venmo? All of these other moms decided to do the same thing!"

The donations for Oscar came pouring in.

"Thirty-two moms donated or gave Oscar a total of $168 which blew me away," said Carrie.

It blew Oscar away too, which is why he used some of the money to donate to Interfaith Outreach.

"They donate food and birthday presents to other people who don't have enough money," said Oscar.

"It lead to a lot of great conversations about how strangers even want to help people and how we can do the same thing," said Carrie.

Oscar who just celebrated his 9th birthday got an upgrade to his mason jar treasure chest! He got a new automated bank safe and his parents also got him a wallet.