Is a Seneca businessman really building a Thruway off ramp?

If you drive along the Thruway on the Seneca Nation territory, you may have noticed crews, building what appears to some to resemble a new exit 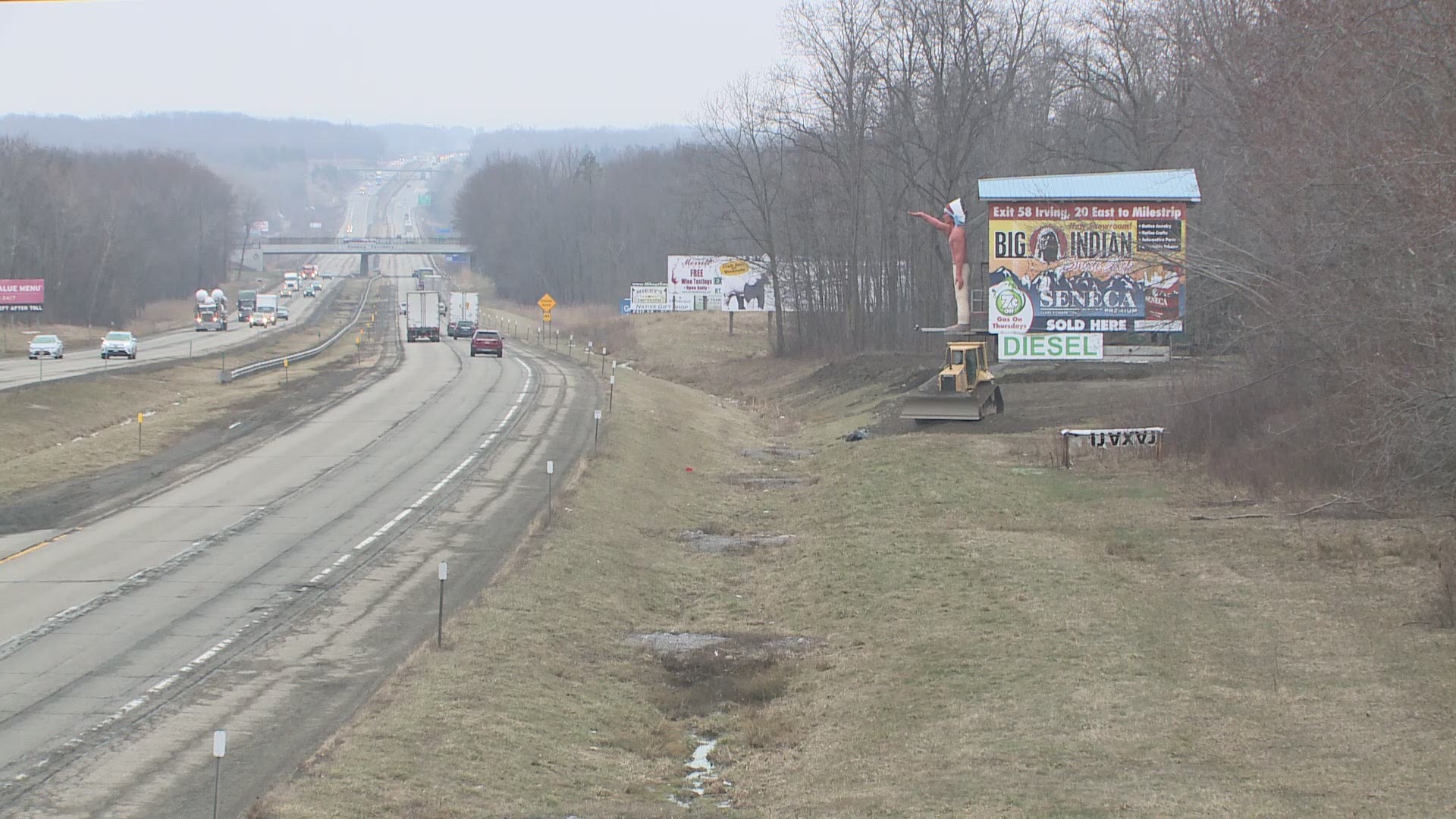 IRVING, NY — If you drive along the Thruway on the Seneca Nation territory, you may have noticed crews, building what appears to be an off-ramp nowhere near an exit.

A veteran truck driver who travels this stretch of the Thruway on a daily basis, told us that he first noticed what appeared to be a new exit ramp being constructed near the west bound lanes, onto the Cattaraugus Reservation on Monday.

Curious, we went see for ourselves.

And sure enough, it appears that something, that looks like it could indeed eventually be an off ramp.... is being built, and appears to be coming ever closer to the Thruway.

It leads to the Big Indian Smoke Shop, owned by Eric White, a Seneca with several different businesses.

We have tried for two days to speak with White, even visiting one of his businesses on Thursday, but he's yet to contacted us directly for comment.

A surrogate of White's phoned on Thursday afternoon to report that he hasn't decided if he will speak about what his intentions are.

However, sources tell us White's activities are part of a personal protest, after losing a recent legal battle with the State of New York.

We can confirm that on March 15 an administrative law judge issued a ruling which upheld fines totaling $2.4 million against White and one of his enterprises for allegedly selling and unstamped -and therefore untaxed - cigarettes in 2012.

White had claimed that the sale and transportation of the truck load of cigarettes was legal, despite their not having a tax stamp, because they were native brands being shipped from one reservation to another in the state. He also claimed state police illegally searched the truck.

White also argued the fines levied were three and a half times what the cigarettes were worth, a total so grossly disproportionate to their value, that it would be considered excessive under the Eighth Amendment.

The administrative law judge rejected each argument in upholding the state's claim in a 50 page decision.

White plans to appeal that decision, according to his attorney Paul Cambria, who also represents White as the principle plaintiff in a lawsuit challenging the state's right to impose taxes of any sort on native territories.

Regarding White's activities on his land near the Thruway, Cambria would only say, "Mr. White believes there is no valid easement that the Thruway has over sovereign territory ."

The Seneca Nation has long expressed the same feeling, however, in a statement to 2 on Your Side it made clear it does not support, or condone any effort by White to construct an exit from the Thruway to his smoke shop, which also sells tax free gasoline, if that is indeed what his plan is.

"While we are aware of the activity being undertaken by an individual on the Cattaraugus Territory, the Seneca Nation has no role whatsoever in what is taking place. Although we know the reason for his actions, we look for a safe resolution addressing this situation," the statement read.

Through a spokesperson, the New York State Thruway Authority stated, "The safety of motorists is paramount and we are looking into the matter to ensure the work does not interfere with the operation of the Thruway."

A spokesperson for the Federal Highway Administration said the agency would typically need to approve any new ramps to an interstate, but he said he was unsure how that policy applied on tribal land. The spokesperson, who had never heard of such a case, said he would look into the situation further to get an answer. 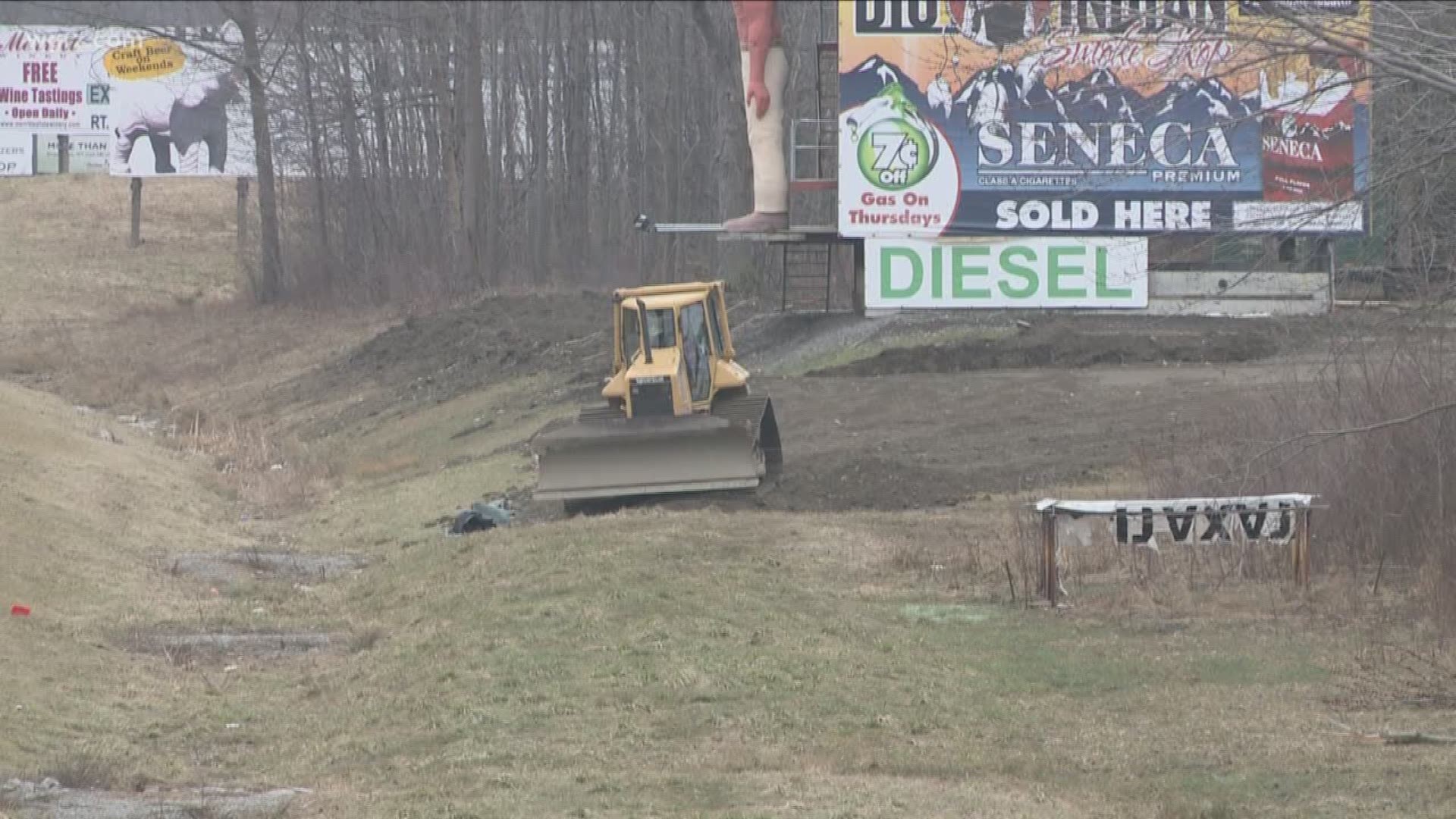 Cambria tells us the case White has against the state regarding the collection of taxes for any purpose on native territories will be argued before New York's highest court- the State Court of Appeals, on April 28. According to Cambria, should the court rule in White's favor, it would also absolve him of the fines he faces in the other case.