Iron Workers Shopmen Union Local 576 spoke out this Labor Day to highlight their current labor struggles with the Wendt Corporation. The company's lawyer says the allegations are "outrageous." 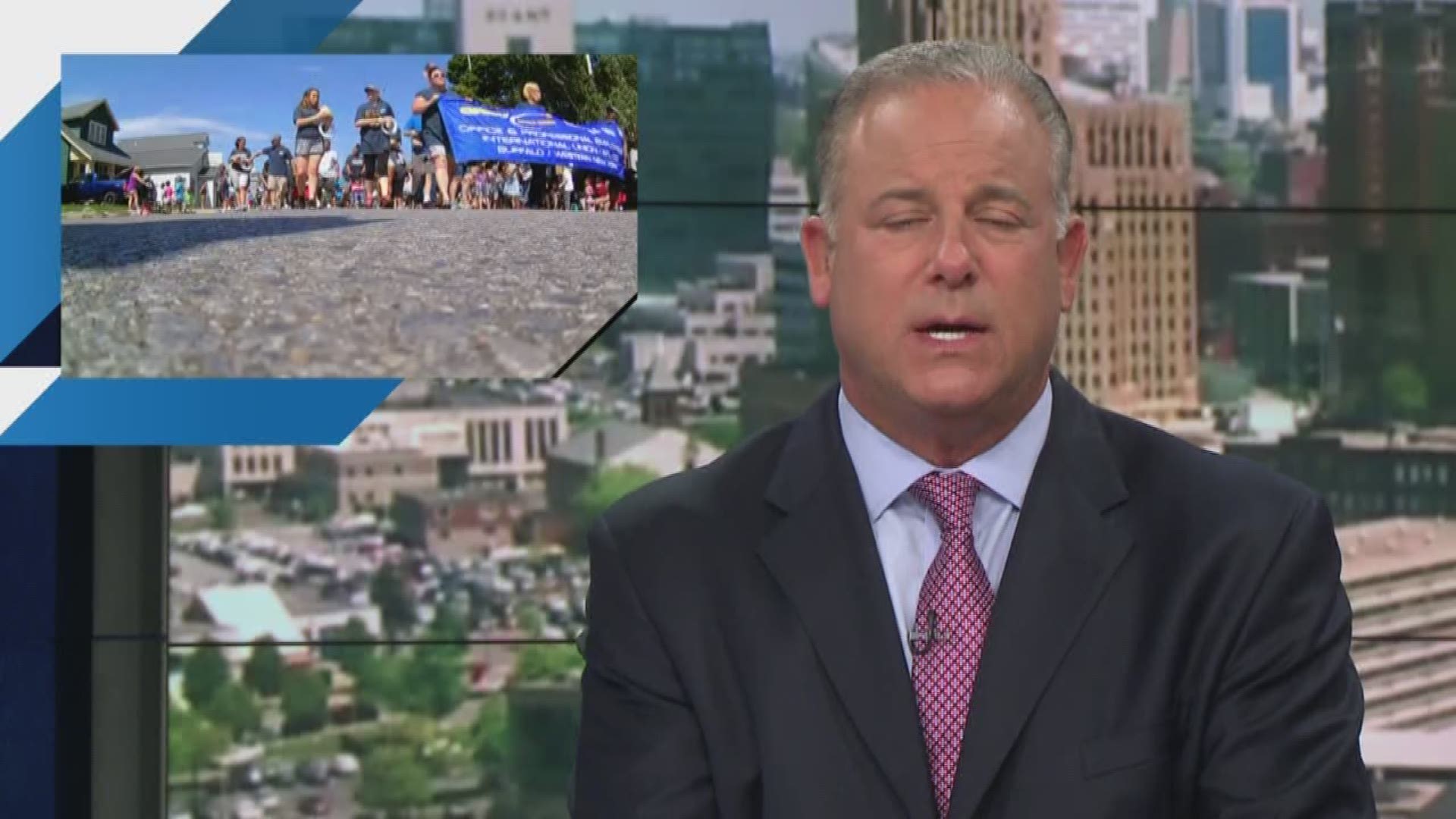 "It's up to us to make things right," said Jeff George, member of Iron Workers Shopmen Union Local 576, "and we gotta do things for our families and for ourselves."

George is talking about a pre-parade press conference at the Buffalo Irish Center where union leaders presented a new report titled, "Wendt Corporation, Don't Shred Your Workers' Rights! A report on workers at Wendt Corporation."

George is one of the employees who contributed to the report. He's an industrial painter at the scrap metal recycling facility on Walden Avenue in Cheektowaga .

He tells 2 On Your Side he had been working there for roughly a year when he was hurt on the job. "I was pushing a cart across the floor and they didn't have wheels that swivel on the piece that I was pushing and I hurt my shoulder."

The union believes injuries like these can be prevented with more safety training and protective equipment.

The Western New York Worker's Rights Board created this report, sponsored by the Buffalo Coalition for Economic Justice. The coalition is made up of labor, faith, community, academic and student organizations and individual activists.

"We don't want to work against the company," added George. "It doesn't have to be a fight for everything. Safety shouldn't be a fight. Safety should be a first priority."

The report is 24 pages long and documents how and why the union organized, employee testimonies about workplace conditions, recommendations from the union, and accusations of delay tactics used by Wendt concerning contract negotiations.

2 On Your Side reached out to Wendt Corporation Monday. Their lawyer, Ginger Schroder responded with the following statement:

Since WENDT CORPORATION's inception in 1977, safety in the WENDT workplace has been an upmost priority. While the recent findings delineated in the Western New York Council on Occupational Safety and Health (WNYCOSH) report released today by Iron Workers Shopmens Local 576 are respected, after review, WENDT is firm that its current level of safety compliance is in full accordance with OSHA standards. "WENDT management has thoroughly reviewed the report supplied by WNYCOSH with both our safety consultants and representatives of OSHA's On-Site Consultation Program (which is administered by the NYS Department of Labor), who are both very familiar with our operations, and we believe that the actions and recommendations put forth in the report are either already currently established practices in place at the company or there is an appropriate level of comparative compliance in place that meets the applicable standard," said Richard Howe, Operations Director. "We do however agree that continuous improvement must be a fundamental principle of any company's safety program."

WENDT CORPORATION's strong commitment to designing programs and implementing correct safety requirements that continuously improve workplace safety for all its employees is evident. WENDT's engagement with safety consultants SCI, coupled with mandatory monthly safety meetings, training programs, and supplying employees with all required personal protective equipment (PPE) act as just a few of the steps taken to sustain this commitment. This steadfast commitment is also reflected in WENDT's workers compensation experience modification rate (EMR) that is 20% below the industry average. According to Safety Management Group, "Experience Modification Rate (EMR) has strong impact upon a business. It is a number used by insurance companies to gauge both past cost of injuries and future chances of risk." Howe concludes, "WENDT is dedicated to working closely with all stakeholders to ensure that our workplace is safe and that our employees are equipped to make the best decisions possible to ensure not only their own safety but also the safety of those around them.

Schroder tells 2 On Your Side that Wendt Corporation brought a contract to the negotiation table on May 8.

This is a copy of the contract Schroder sent us:

This is a transcript of a speech which Schroder says company president, Tom Wendt Jr., relayed to employees that day after the contact was presented to the union:

This report is now being presented as a followup to WNYCOSH's "Risky Business Report," released in July. WNYCOSH, according to its website, is a non-profit organization dedicated to defending workers' rights to a safe and healthy work environment through outreach, advocacy, and education, to improve the working conditions of all workers.

The report is a 41 pages documenting the findings of a recent walkthrough assessment of the Wendt facility, coupled with safety reports from OSHA.

Of the 31 areas inspected during that walkthrough, WYNCOSH found 17 to have "Major Hazards" and four areas were identified as having "Fatal Hazards".

Schroder says the company would never have opened their doors to a walkthrough assessment if they had anything to hide.

She calls the union's safety concerns "outrageous" and tells 2 On Your Side the company has an excellent safety record and that there are safety protocols and a safety committee already in place.

Wendt's lawyer says the union is using safety as an excuse for not accepting the labor contract. Schroder says, while Wendt is a scrap metal recycling facility, they are a manufacturer by default and that 95-percent of the engineering work is subcontracted. She says the union proposed there should be no more subcontracting, which Schroder tells 2 On Your Side is not feasible because the Cheektowaga facility doesn't have the resources to do the manufacturing work.

Workers continue to holdfast to their concerns saying they moved to unionize in 2017 because of unsafe conditions at the facility.

"They constantly harass us at work...on the job," said Derek Muench, a machinist who tells 2 On Your Side he has been employed by Wendt for 7 years, "trying to break up our union. Hopefully we can get a resolution...get a contract soon."