The trade groups say 'the broadband service that New York seeks to regulate has never been subject to rate regulation at the federal or state level.' 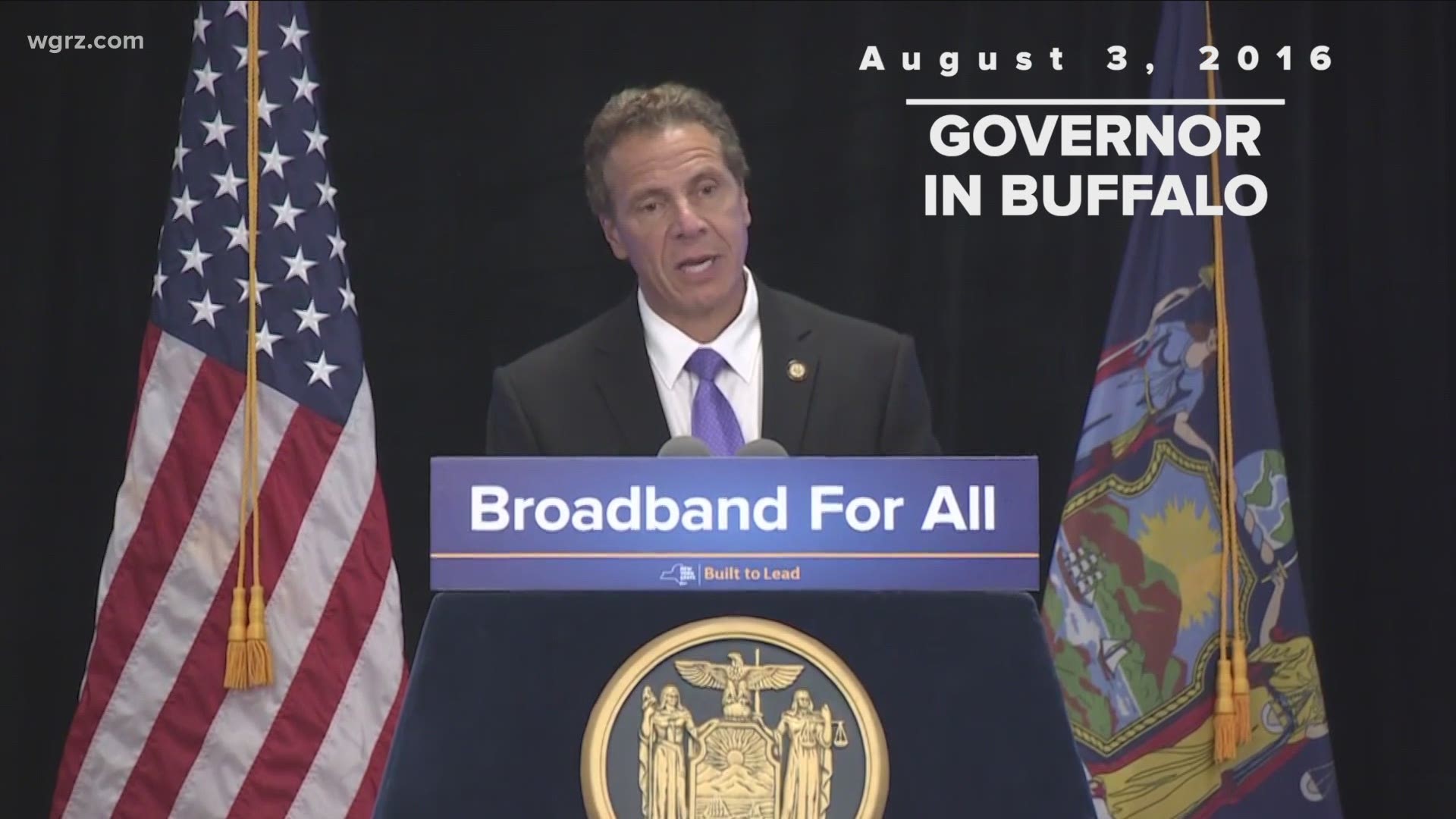 BUFFALO, N.Y. — Gov. Andrew Cuomo visited Buffalo on April 16 to ceremoniously sign a state budget mandate that would force broadband providers to offer a $15-a-month service if they subscriber met a variety of low-income criteria.

Two weeks later, multiple associations, lobby groups, and their members have filed a lawsuit to repeal the budget measure.

Verizon and AT&T are members of the NYSTA and CTIA-Tie Wireless Association.

According to the lawsuit documents, the trade groups say "the broadband service that New York seeks to regulate has never been subject to rate regulation at the federal or state level."

The documents go on to say that ISP's understand the need to close the digital gap, but said the FCC and D.C. Circuit court "upheld and the federal Communications Act preclude New York from regulating broadband rates."

The full lawsuit document can be found here.

In response, @NYGovCuomo said, "bring it on." @WGRZ pic.twitter.com/2zBANXNUVT

Telecommunications lawyer Martha Buyer says this could be a difficult case for the trade groups if the FCC brings net neutrality back, which is on the table with the Democratic-led commission.

"If broadband is again classified as a utility, all of these arguments will fail because the FCC, at least for the time being, will have some authority," Buyer said. "However, as more communications (voice) moves to IP technologies, the FCC will have decreasing amounts of authority to regulate and monitor because IP is clearly an information service and not a telecommunications service."

Buyer pointed out that the plaintiffs recognize that the digital divide is wide in the lawsuit documents.

"Further, if they were really meeting these goals, firms like Charter wouldn’t be spending thousands of dollars hiring big gun lawyers to prevent you from getting the information you need regarding Charter’s compliance with the PSC order."

Buyer is referring to a recent FOIL appeal 2 On Your Side lost against Charter regarding its plan of record. WGRZ is still weighing its future appeal options.

2 On Your Side has reached out to Charter Communications, arguably the largest internet provider in Western New York, to ask if they are participating in the lawsuit. A spokesperson sent the following:

"We’re not a part of, nor any association that represents us. We’re evaluating the suit."

Governor Cuomo's office told 2 On Your Side in an email last week that approximately 2.7 million low-income households are eligible for service.

In a statement, Governor Cuomo alluded that providers don't have a "God-given right" to provide service in the state:

"COVID hasn't only threatened the health and well-being of New Yorkers, but it exposed the many injustices preventing millions of people from building a prosperous life. Now more than ever, it's critical we break down these barriers and ensure every New Yorker is able to take part in our post-COVID recovery.

"The fact is, this is the 21st century and whether you point to remote education, telecommuting, telehealth or otherwise, broadband holds great power. Simply put — it's become an essential service and that's why it was so important to ensure affordable internet was available for low-income New Yorkers.

"I knew giant telecom companies would be upset by our efforts to level the playing field, and right on cue, they're pushing back. This is nothing more than a transparent attempt by billion-dollar corporations putting profit ahead of creating a more fair and just society.

"Let me be abundantly clear — providing internet in the Empire State is not a god given right. If these companies want to pick this fight, impede the ability of millions of New Yorkers to access this essential service and prevent them from participating in our economic recovery, I say bring it on."

2 On Your Side also reached out to the office of the Attorney General, but have not received a response.