WNYers create new outdoor game with a cause

There is a new game you can add to your outdoor activities this season, created by a couple Western New Yorkers. It's called "First-N-Ten". 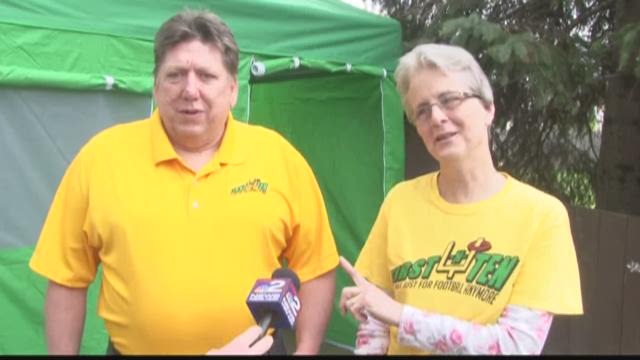 The days are longer and the temperatures are warmer and that means more time to be outside.

There is a new game you can add to your outdoor activities this season, created by a couple Western New Yorkers. It's called "First-N-Ten".

Patent pending First-N-Ten is a new outdoor game for any age. It is co-created by a North Tonawanda couple.

The idea has been three years in the making.

"I think it all started back three years ago at a Fourth of July party," Michael Wolf, of North Tonawanda, said. "We were in this very backyard, playing all your typical outdoor games, having a great time and I think that's what set the seed."

Fast forward to just before football season of that year. Michael said he was in a grocery store when he saw a football goal post.

He stopped his grocery shopping and went straight home to write down his vision of a game with a goal post and Frisbee-like rings.

"I've seen a goal post a 1,000 times before," Michael explained. "But this time it just kind of stuck. So I ran home, grabbed a pen, grabbed a piece of paper and I started writing down diagrams and directions and coming up with scoring."

Now, the vision is a reality. First-N-Ten evolved from it's early design to a five-prong piece. The set comes with two goal posts and four "flying rings" that can be bagged and taken anywhere.

Tailgating may come to mind but like their slogan says, it's not just for football anymore. They say take it to the park or the beach or your backyard.

You need two teams of two and the game goes like this:

"If you hit anywhere on the up right, you get one point," Michael said. "If you put it through the upright, like a field goal, you get three points. And if you ring one of the uprights, you get five points. If you ring both uprights on the same turn, it's an instant win.

An instant win, depending on your hand-eye-coordination. And it is also a win for Western New York.

The Wolf's say a portion of every First-N-Ten purchase will go to a local charity like Carly's Club for Kids & Cancer research.

Co-creator Jean Wolf is a stage-four throat cancer survivor and is just now in remission. Carly's Club was an easy choice to support.

"We want to pay it forward," Jean said. "And we want our game to go well but we also want to help people."

In addition to having fun and giving back, the Wolf's hope that this internationally available game shares a little bit of Western New York with the world and stirs some home-town pride, too.

"Let them know we're something other than snow," Jean said. "We are football. We are games. We are outdoors people. We are strong. And we support our own."

You can find First-N-Ten at Niagara Produce, Budweys Market or on their website.