The buzzing of DC pulses fills an unsuspecting basement in East Amherst. It’s here that Zach Vader and his father Scott plan on changing the landscape of additive manufacturing. 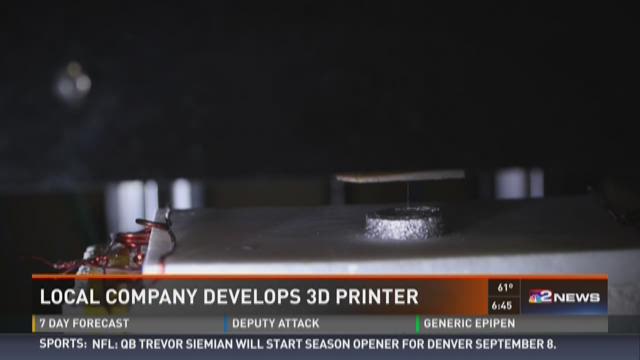 EAST AMHERST, NY - The buzzing of DC pulses fills an unsuspecting basement in East Amherst. It’s here that Zach Vader and his father Scott plan on changing the landscape of additive manufacturing.

Their company, Vader Systems, is one of two companies in the entire world, that have developed and manufacture liquid metal 3D printers. The other company is Israeli based XJet, who developed a different method of liquid metal printing.

Zach has been developing his liquid metal 3D Printer, the MK1, since 2013. His knack from mechanical engineering stems from his father’s 30-year career as one and project lead the way in high school. The program offered college-level courses, which focused on CAD, drafting and 3D Printing

Excited to further advance his love of making, Zach enrolled in college, focused on engineering, and quickly became bored.

“First semester in college was the same thing I did in 10th grade,” said young Vader

“I certainly knew his abilities from an early age from thinking out of the box in an intuitive sense for engineering,” recalled father Vader.

Zach sat down to identify a field that needed solutions. The area of focus for him was 3D printing, specifically metals which at the time was in its infancy on a commercial level. One of the problems he identified was the cost involved in using powder for metal 3d printing - it’s expensive and time-consuming.

“Let’s have a non-contact method where we can deal with the high temperatures and highly corrosive nature of aluminum and still propel it,”

Vader’s system, think of it as an inkjet printer for liquid metal, uses a spool of raw material, such as aluminum, which is fed into a chamber where it’s heated up to 800°C in a ceramic chamber then using electromagnetic pulses the molten aluminum into individual droplets, eject and form with pinpoint precision.

“It failed for a year,”said Zach Vader

The printer works now and it’s pretty remarkable how precise the droplets of molten aluminum are.

Zach’s father Scott left his job of 30 years and now works with his son full time as CEO of Vader Systems, allowing Zach to focus on product development

“I think failure for entrepreneurs is overrated," said Scott, "it’s not a necessary path or a useful path. So I thought I’m going to do what I can to help my son along his way.”

With companies like Lockheed Martin and other technology fruit companies interested in their product, it seems like the timing is right for Zach and his father to advance the world additive manufacturing.