The freezing along Lake Ontario in Olcott is a sight to see, and something that long-time residents of Olcott say they don't see every year. 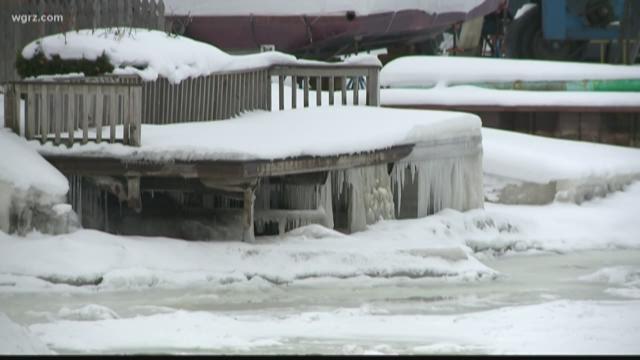 OLCOTT, NY - The freezing along Lake Ontario in Olcott is a sight to see, and something that long-time residents of Olcott say they don't see every year.

There are hills of ice along the shoreline right outside a row of waterfront homes on West Bluff in Olcott.

Some people say they haven't seen this type of freezing in years.

One long-time resident, Mike Taheri, says it's like being on the moon. But, even with this freezing, according to the National Weather Service, Lake Ontario is 14 percent frozen, with only the shoreline icing up.

"You get the waves coming in from the north and it just keeps building up and sprays like holding a hose in front of a fan real cold temperatures and starts to freeze on the railing and on the rocks, then it builds up mounds like mountains of ice," said Bob Kilroy, an Olcott resident.

Eventually this ice, of course, will all melt away. And, there have been some flooding issues along the shoreline here last year. Meteorologist Patrick Hammer says he doesn't think ice melt could cause flooding issues. He says snow melt is more of a concern and something we'll have to watch when the weather breaks.