The fire started just after 10:00 p.m. on Monday. Long after firefighters brought it under control, mop up duty continued into late Tuesday afternoon. 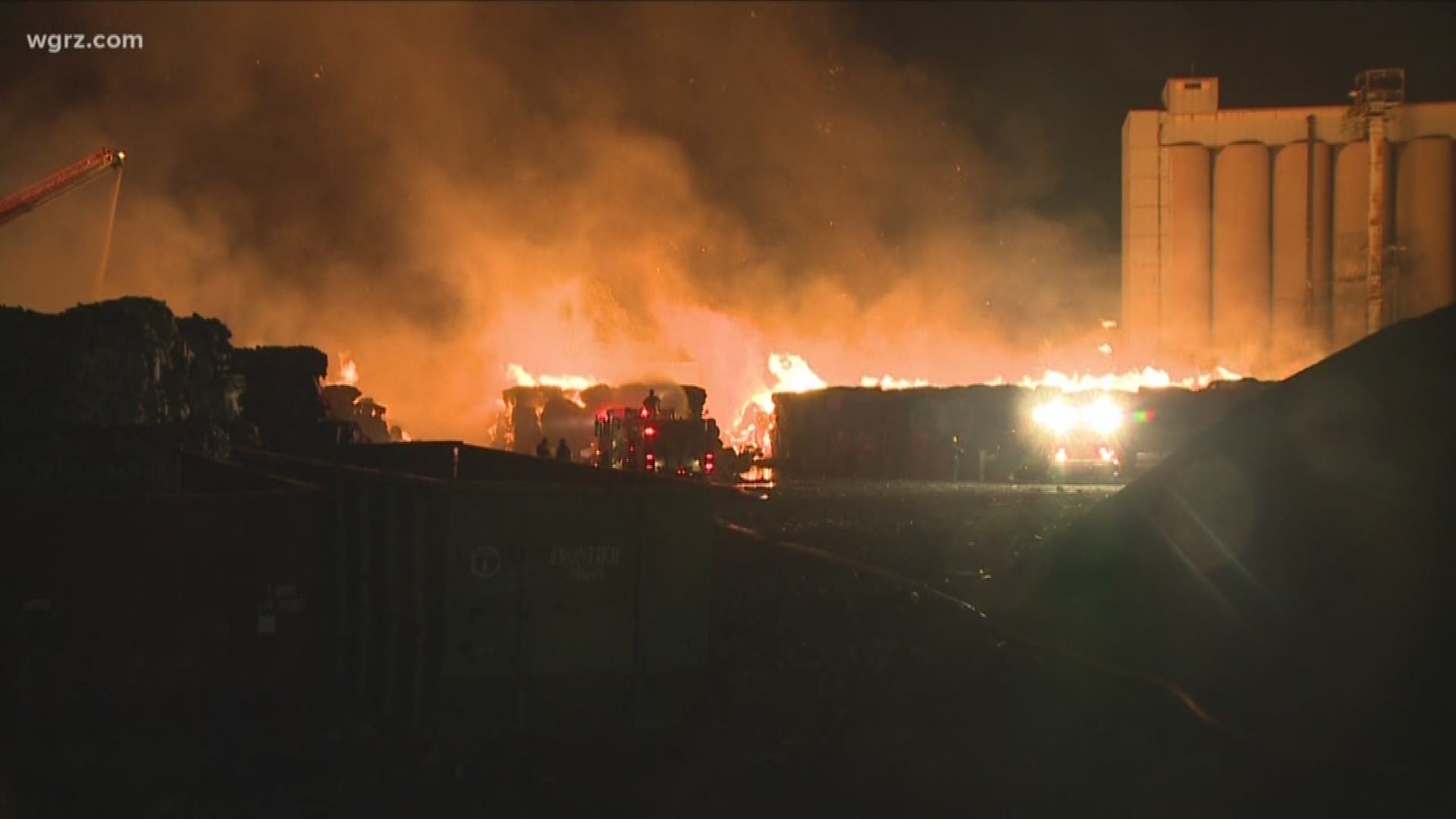 NIAGARA FALLS, NY - Remnants of a huge fire in a cardboard storage yard at a paper recycling facility in Niagara Falls could smolder a bit longer, but fire crews expect to leave the scene by midnight.

The fire started just after 10:00 p.m. on Monday at a yard operated by Santarosa Holdings, near the corner of Highland and College Avenues.

Firefighters had it under control by early Tuesday morning, and said it never posed a danger to the surrounding community, which is a largely industrial area with brownfields in the city's North End.

The cardboard that burned was contained in an open lot, and no structures were involved.

Looking for a Cause

"We're still investigating the cause," said Niagara Falls Fire Chief Thomas Colangelo, as crews worked into Tuesday afternoon to break up smoldering bales of cardboard and put out any hotspots.

At the height of the blaze, about 30 city firefighters, assisted by one volunteer crew from Youngstown, were engaged.

Chief Colangelo added that workers inside the complex had already taken steps to help prevent the fire from spreading by the time they arrived.

"Workers for the company mounted heavy equipment right away, which was good, and the first thing they did was to move material that had not burned to the other side of the facility so that helped the fire from spreading," said Colangelo.

He also noted that the facility had spaced the bundles several yards apart from each other, as fire codes would have dictated.

"That creates firebreaks, which is what they are supposed to do," Colangelo said.

No one was injured in the fire.

"I'm relieved, because this could have been a lot worse and its not," said Aaron Santarosa, who helps operate the family business.

Santarosa estimated about 50% of the stockpile of cardboard and paper, some of which is converted into low carbon fuel, was lost. He also expects the financial loss to his family's company to be substantial.

"It's gonna be painful, but we'll work with our partners and we'll see how we can get through this," Santarosa said. "I give all the credit to the city fire department."

A half mile from where the fire occurred, residents along Tennessee, Virginia, and Rhode Island Streets experienced what one described as a "snowstorm" like effect from falling ash.

"I was looking out my kitchen window and and I saw these small…white flakes coming , and thought gee it looks like snow almost, and I know it's not snowing, " said Evelyn Hackworth who lives on Virginia Street.

She and others in the neighborhood spent Tuesday getting their cars cleaned.

"And wouldn't you know, I just had the thing washed," she said, as she looked over her ash covered sedan

Chief Colangelo said residents were never in danger, and there are no lasting environmental concerns.

"No, not with what was burning," he said. It was just cardboard.

On one hand, Colangelo noted, the dry weather of this summer made the bundles more tinder like.

On the other, an early morning downpour assisted firefighters, not so much in putting out what was burning, but to wet down the other bundles that weren't, keeping the spread of the fire at bay.