An obese beagle has lost more than half her body weight since she was dropped off at the SPCA of Niagara County for euthanasia. 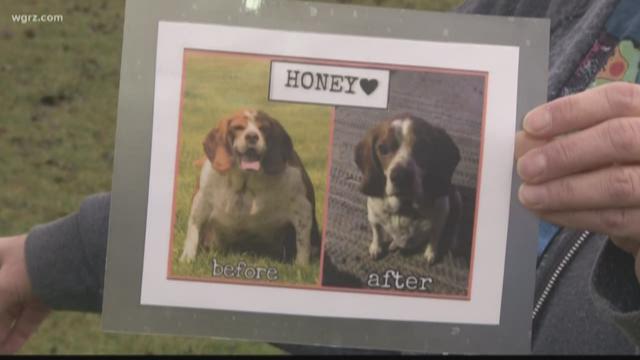 Honey the Beagle was dropped off last June for euthanasia at the SPCA of Niagara County.

She weighed 68 pounds which is about forty pounds above a healthy Beagle weight.

She could hardly move, her belly scraped the floor as she dragged herself by her front paws and she was urinating and defecating on herself.

The SPCA said her owner was an elderly woman with dementia. They suspect she would forget she fed Honey and feed her again.

But luckily for Honey, that is not where this story ends.

The SPCA of Niagara County, a no-kill shelter, committed to saving her and they did.

They got her thyroid in check with medication and started working off the pounds.

It was slow at first. With just trying to get the dog to move. But she was eventually in rehab twice a week, working on things like a water treadmill.

Six months later and she has lost 38 pounds.

"I was amazed at how fast it happened," Sue Cable, an SPCA volunteer and foster dog mom, said. "Once she was in a home and able to move around in that, she just went."

Honey's improvements are beyond her physical appearance.The SPCA staff said she is happier and in better spirits.

The vets said she would like to see Honey lose about five more pounds before she is medically cleared and ready for adoption.

You can keep up with Honey's journey through the Niagara County SPCA's Facebook page. The dog has quite a following.