Buffalo's Hispanic community is celebrating some new public art that reflects their culture. 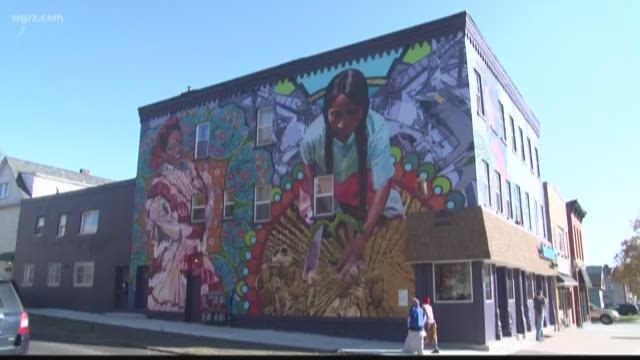 BUFFALO, NY — Buffalo's Hispanic community is celebrating some new public art that reflects its culture. The Hispanic Heritage Council has worked over the past few years, to bring new paintings, statues and landmarks to the Niagara Street corridor.

"There's millions of people that cross that Peace Bridge and the first main street that they hit is Avenida San Juan, the Niagara Street corridor," said Casimiro Rodriguez of the Hispanic Heritage Council.

There are also new maps here, that show what retail stores, restaurants and services are in the Hispanic Heritage District. The signs also show a timeline.

"The timeline that illustrates the significant events and people and activities that have shaped our Hispanic community," Rodriguez said.

Also here are two landmarks, highlighting the work of Hispanic leaders in Buffalo.

One of the landmarks, at the corner of Niagara and Jersey streets was unveiled Wednesday. Canida Ramierz-Ramos found pictures of herself and her family on the landmark. Her family owned Buffalo's first Spanish restaurant, called El Me Gusto restaurant, which was on Michigan Ave, near downtown Buffalo. And, her nephew says it was the center of the community.

"Almost all the Hispanics that came in this area at that time went to that restaurant and these ladies and my grandmother helped all the families get their papers get jobs," said John Sanabria.

At Niagara and Virginia streets there are new statues of buffaloes. And at 12 Grain Studio, there's a large mural that you can't miss. Hispanic heritage leaders hope all this public art can change the face of the lower West Side.

Leaders say there was a lot of fundraising to get to this point, and a lot of research done at places like the Erie County Library and the Buffalo History Museum. The Hispanic Heritage Council says eventually they'd like to see a Hispanic Heritage museum on Niagara Street.