Among the scenarios is a glass-enclosed entertainment complex and playground with year-round beaches and swimming pools. 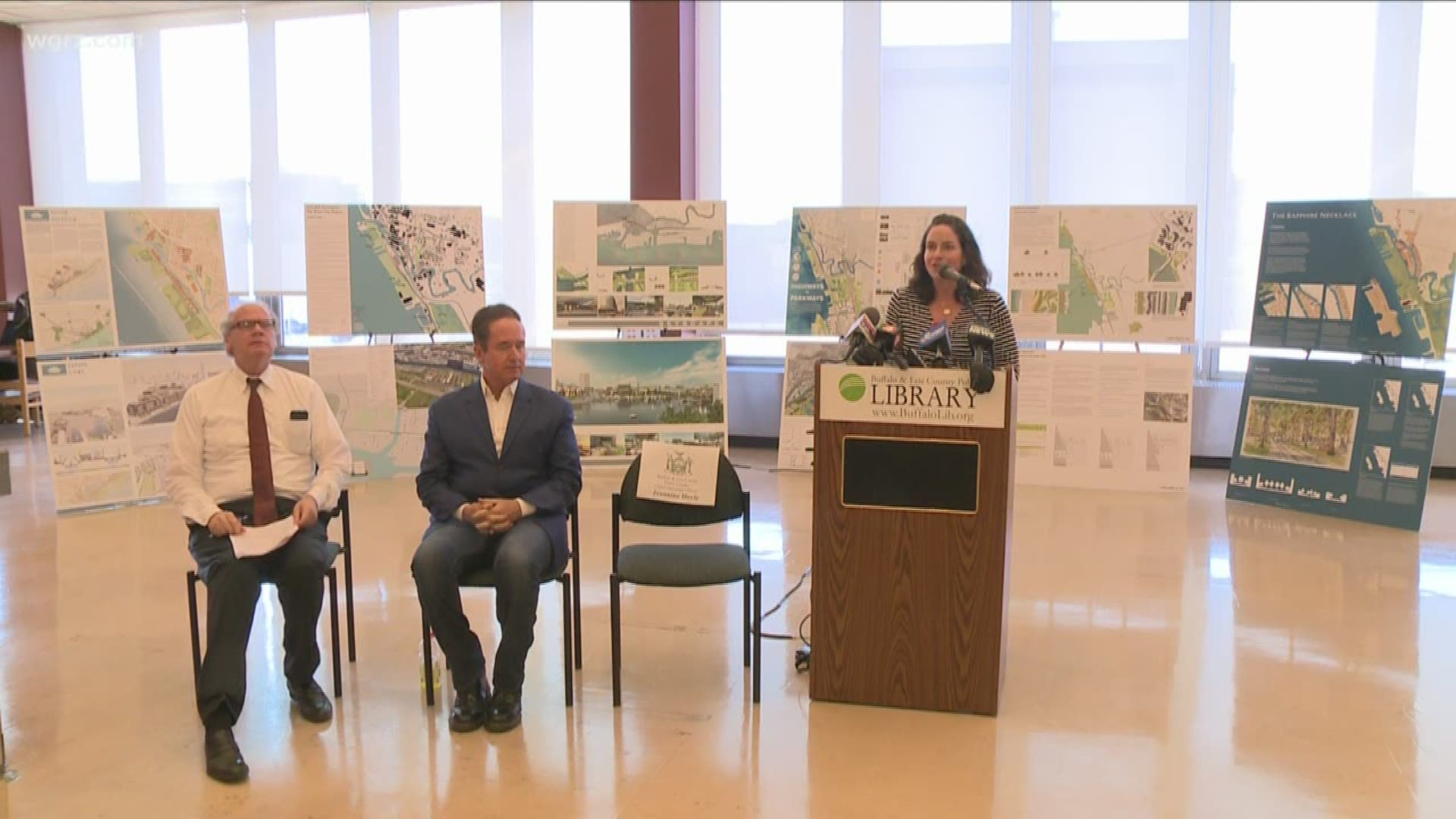 BUFFALO, N.Y. — The public finally got its chance to see ideas submitted for the future of the Buffalo Skyway Wednesday, with the unveiling of submissions to re-purpose the transportation landmark.

Empire State Development is overseeing a contest announced by NY Governor Andrew Cuomo in February, under which the team with the winning design is to be awarded $100,000.

A local review panel, led by Buffalo Mayor Byron Brown, will help select the winning design after hearing from citizens about the proposals.

Tear it Down or Leave it Up?

Of the 16 plans, 11 of them call for keeping the skyway structure intact, to varying degrees, although several of those propose that it no longer be used for traffic as it has since its construction in the 1950s.

The others call for its complete removal.

One plan (the least expensive) suggests that “Buffalo’s Skyway is a busy arterial that mainly moves through existing and planned park lands. We see no benefit to putting thousands of commuter vehicles and trucks at the same level as the waterfront’s recreational use.”

Another plan suggests reducing the number of vehicular traffic lanes on the Skyway, while adding a light rail line which would use the bridge to service the Southtowns, and yet another envisions it as an elevated tree-lined boulevard, with bike lanes and traffic- limited to cars and buses with a single lane in each direction.

One proposal, with an estimated price tag of $650 million, would convert the current limited access skyway into an elevated tree-lined boulevard with a single traffic lane in each direction, but with parking lanes and buildings on either side, creating a commercial strip in the sky.

Other plans call for the structure to stay in place, but without any vehicular traffic, and for the Skyway to be converted into an elevated urban park, similar to the New York City Highline, a former elevated railroad which is now a walking path with green space and shrubbery enjoyed by pedestrians.

Another plan which favors a “Skyway Park”, providing panoramic views for pedestrians and cyclists, reasons that the Skyway should stay in some form because it is an “iconic” symbol of Buffalo.

The Wildest of the Plans

Perhaps the most unusual plans call for closing the Skyway to traffic and then enveloping its deck in a glass, Epcot Center like ceiling creating a year-round, tropical paradise which would feature several swimming pools and beaches high above the ground. It proposes a recreational mecca with facilities for miniature golf, rock climbing and bungee jumping, and an auditorium for concerts. Those who came up with the plan (with an estimated cost of $324 million) say because of its unique characteristics, it would become a tourist draw, generating $54 million in revenue per year.

Leave Part of it Up?

At least two proposals call for removing the road deck, but leaving the pylons which support the Skyway intact for other uses.

One plan (estimated cost $129 million) calls for removing the road deck, and keeping the pylons to affix wires for gondolas as part of an “aerial tramway”, while another plan would utilize the pylons as “renewable energy hubs”, to support solar panels and wind turbines,  while converting the surrounding lands into housing accessible by a new draw bridge on South Michigan Street near the General Mills Plant.

Five plans call for the complete removal of the Skyway and any of its trace structures.

One proposal, with an estimated cost of $364 million, calls for the construction of an Olmsted like park in its place, accessible from downtown Buffalo by a new low-level bridge, and providing a natural transition to the outer harbor.

Other, more expensive plans, call replacing the Skyway with a ground-level boulevard, with complete development of surrounding lands with homes and businesses, while connecting them to the downtown area with low-level lift bridges.

Reality, or Pie in the Skyway?

It is hoped a winning design will be picked by the end of fall.

Just when any plan could be put in place and come to fruition, however, is anyone’s guess and likely wouldn’t happen for decades.

Here is the full list of final submissions, with more complete details on their ideas: