Guardrail device to be removed from NY roads

New York will become the ninth state to remove X-LITE guardrail end terminals from its roads and highways. 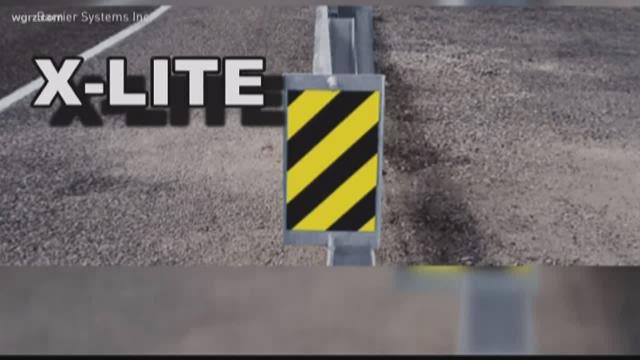 BUFFALO, N.Y. — A guardrail device blamed for the death of a Western New York native will be completely erased from state roadways by the end of 2018, the head of the New York State Department of Transportation said on Thursday.

The X-LITE guardrail end terminal, developed by Nebraska-based Lindsay Corporation, has been under heavy scrutiny ever since a fatal crash in Nov. 2016 in eastern Tennessee. 17-year-old Hannah Eimers, who was born in Fredonia, exited Interstate 75 early on a Tuesday morning and crashed into an X-LITE guardrail end terminal. She died on impact after striking the device, which is intended to help ease the blow of a high-speed collision.

Hannah's father, Steve, then launched a nationwide campaign to remove all X-LITE terminals from the roads, leading several states to immediately investigate the device. 2 On Your Side's reporting last year, which included an interview with Steve Eimers, caught the attention of Senator Young and prompted her to file legislation to ban the X-LITE.

Senator Young's legislation, which passed the Senate but stalled in the Assembly, will essentially be carried out by NYSDOT as a result of Thursday's announcement. New York will become the ninth state to physically remove the devices, joining Tennessee, Missouri, Virginia, Oklahoma, Ohio, Vermont, New Jersey and Rhode Island. The majority of states in the U.S. have also removed the X-LITE device from their list of approved products, including New York.

Steve Eimers believes he has uncovered more than 20 instances across the U.S. in which an X-LITE contributed to a fatal accident.

"This is a product that is inherently defective. It killed my daughter," Eimers said in a phone interview shortly after the NYSDOT commissioner's announcement. "I've called dozens of families all around the United States that have shared the same loss as our family."

2 On Your Side filed a Freedom of Information Law request in July with NYSDOT to determine where exactly the state installed these devices. The agency has not yet fulfilled that request, so it is unclear where the 43 X-LITE guardrail end terminals were originally built across New York.

In a news conference with Senator Young last year, Eimers said X-LITE devices have been spotted along Interstate 86 in the Bath, N.Y. area of the Southern Tier, but that information was based on an informal sighting rather than official state data.

It also remains unclear how many X-LITEs may be installed on local roads across the state. The decision by NYSDOT to remove X-LITE devices will only apply to state-operated roads and highways.

During Thursday's budget hearing, Senator Young asked Commissioner Karas if he knew how many X-LITE devices are located on roads owned by counties or municipalities, but Karas said he was unsure.

"The local system is not within our jurisdiction," Karas said, "but we can discuss this with you about how that will be approached, can be approached."

For months, however, Lindsay Corporation has been quick to point out that the X-LITE passed crash and safety tests. A spokesperson also noted that deaths caused by guardrail end terminals represent a very small percentage of fatal crashes. In 2016, a guardrail end terminal -- of any kind or product -- was considered the most harmful factor in only one fatal accident, according to federal data provided by the spokesperson.

A NYSDOT spokesperson said he was not aware of any deaths in New York involving the X-LITE.

A full statement from Lindsay is included below:

The Federal Highway Administration also released the following statement to 2 On Your Side:

"Safety is the top priority of the Federal Highway Administration, and we remain committed to reducing fatalities on our nation's roads. No family should suffer like the Eimers family has. Beginning in 2018, federal reimbursement for roadside guardrail end terminals will be contingent on these devices meeting the most recent safety criteria developed by all state departments of transportation."