If the state and the Bills are going to proceed with having fans at the playoff game, Poloncarz says he needs a decision this week, preferably by Wednesday. 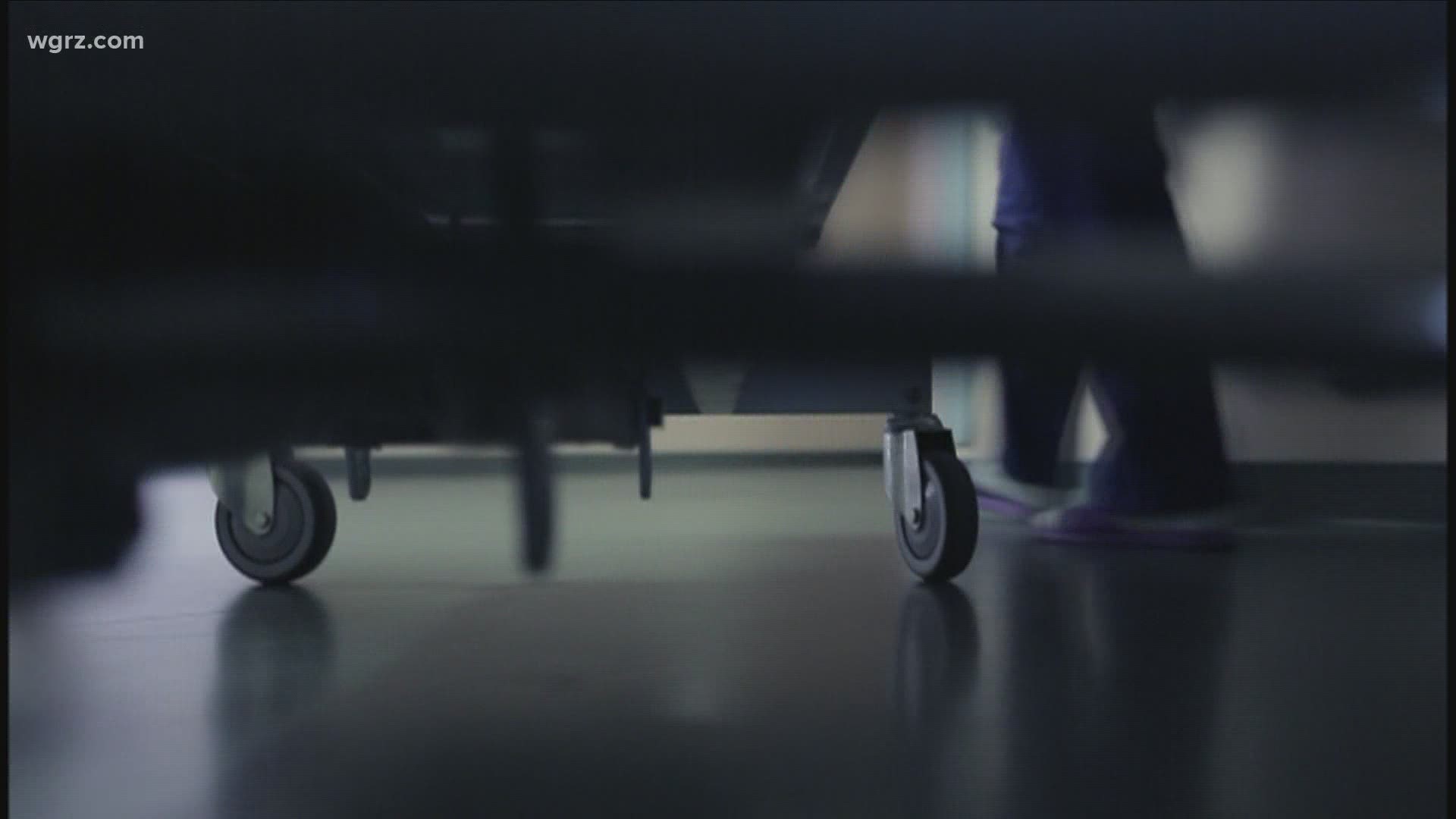 ORCHARD PARK, N.Y. — With the season winding down, fans are wound up for the NFL playoffs with the Buffalo Bills definitely in the picture.

But can we expect to see Bills fans in the stands?

Erie County Executive Mark Poloncarz says the state, the county, and the Bills are still talking about it.

"I originally said on behalf of the county we felt we could get 7,000 people, which is about ten percent of the capacity, in safely. We were concerned about tailgating and that's why the Bills in their proposal agreed to not allow tailgating, basically you come in and just go into the stadium," said Poloncarz.

So the state's proposal, brought up before Christmas, was to test 6,700 fans before entry into the stadium. While Poloncarz seemed a bit frustrated about being out of the loop, he seems more receptive now with the understanding that the Bills or the state would actually have to provide the testing.

Poloncarz said that he's now "had conversations with representatives from the Bills and the state. As the Governor noted, I think earlier today, they still are having some conversations but nothing definitive (no decision) has been made."

Other NFL stadiums like First Energy in Cleveland have been letting limited numbers of  fans, six thousand or so, in since September.

Last week 2 On Your Side checked with most of the 15 NBC affiliated stations in NFL cities where teams do allow entry to fans. And they all said as far as they were aware, there were no reports at this point of any fans contracting COVID-19 from attending a game.

Much like the Browns in Cleveland, the other stadiums have strict entry, masking, seating, and bathroom spacing policies at stadiums.

Nashville, where the Tennessee Titans play, actually allows up to 14,500 fans. Other teams like the Denver Broncos started with fans in attendance but closed down as COVID-19 spread during the season.

In some markets like Pittsburgh, have actually limited attendance to family members and friends of players, coaches, and staff.

Whatever the case here in Western New York, if the state does agree, Poloncarz says he needs a decision this week, preferably by Wednesday, to alert county staffers who handle security and other details.

He says that's because they have other crucial duties.

"We need to get an answer soon from everyone just so that we can prepare. Because as I've said before the team that's intimately involved also in the vaccine delivery as well as the COVID-19 response - are some of the same people who would have to be at the stadium on game day to ensure the safety of the fans," Poloncarz said.

Poloncarz also spoke with reporters about whether Erie County could be shifted from an orange zone to a less restrictive yellow zone since the Governor and others have acknowledged that this region has lowered its COVID-19 positivity rate down to 5.6 percent.

That orange zone designation went into effect here in most of Erie County back on November 19, with other areas going into yellow designation. 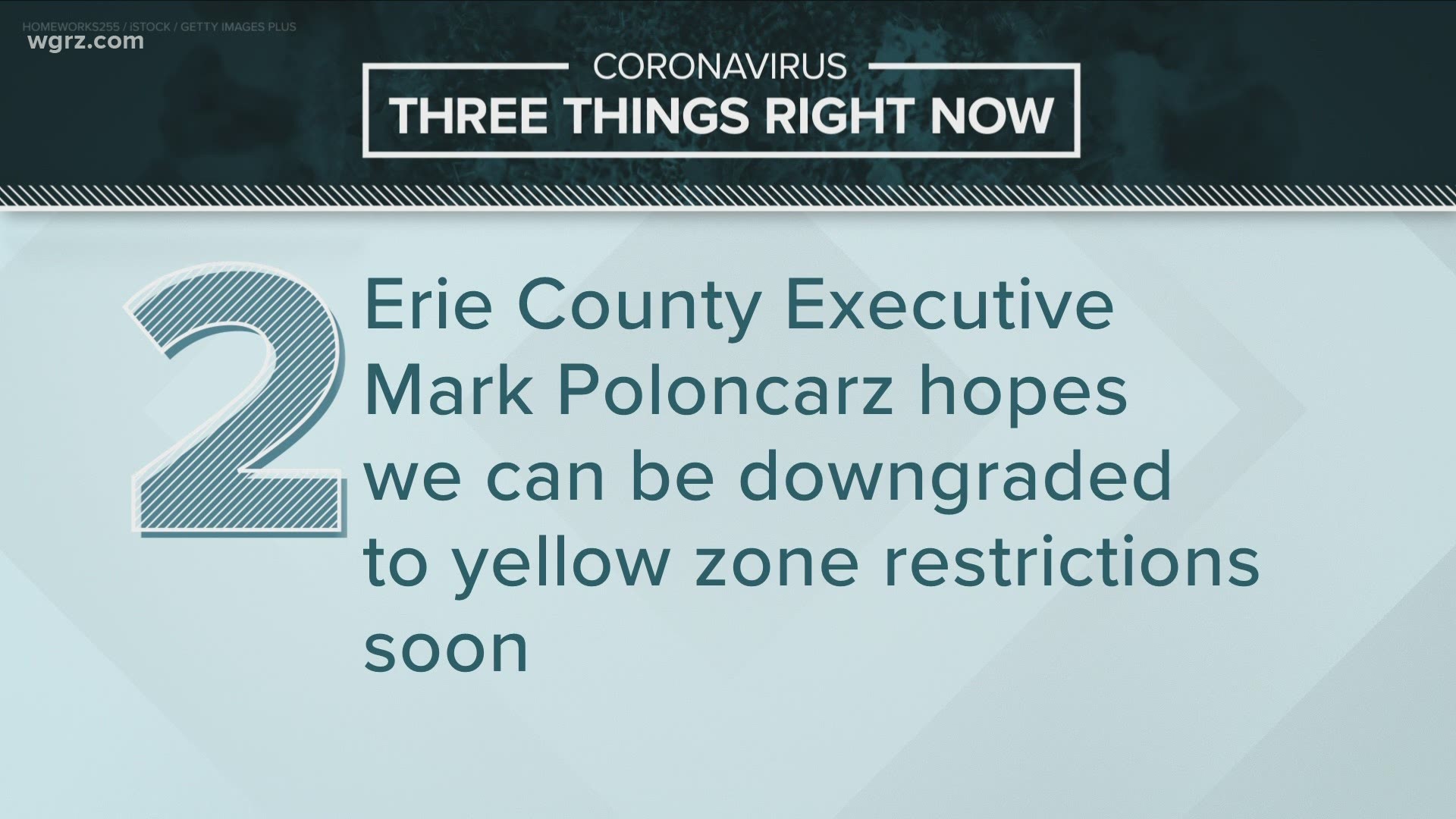 "I think if we can get it to the three percent range then we'll probably go back to yellow. But we have seen a little drop and we can see that over the last four weeks. But we do need to continue to see that drop so we can show the state we are doing better," Poloncarz said.

Restaurants that have been hit hard, struggling with only take out service allowed in the orange zone which takes up most of Erie County, will be watching closely. Poloncarz says he is ready to make his case with the state for a change in status.

He says "we are advocating to at least go back to yellow for the vast majority of the county. We believe we can safely do that but we need that number to continue to go down and that information has been shared with New York state."

Poloncarz says that by the end of this week they may have a better read if there is any post Christmas bump in new cases. And he points out with light travel on Christmas Eve and Day, and even the heavy snow limiting travel this past Saturday, a continuing downward trend is the hoped for.