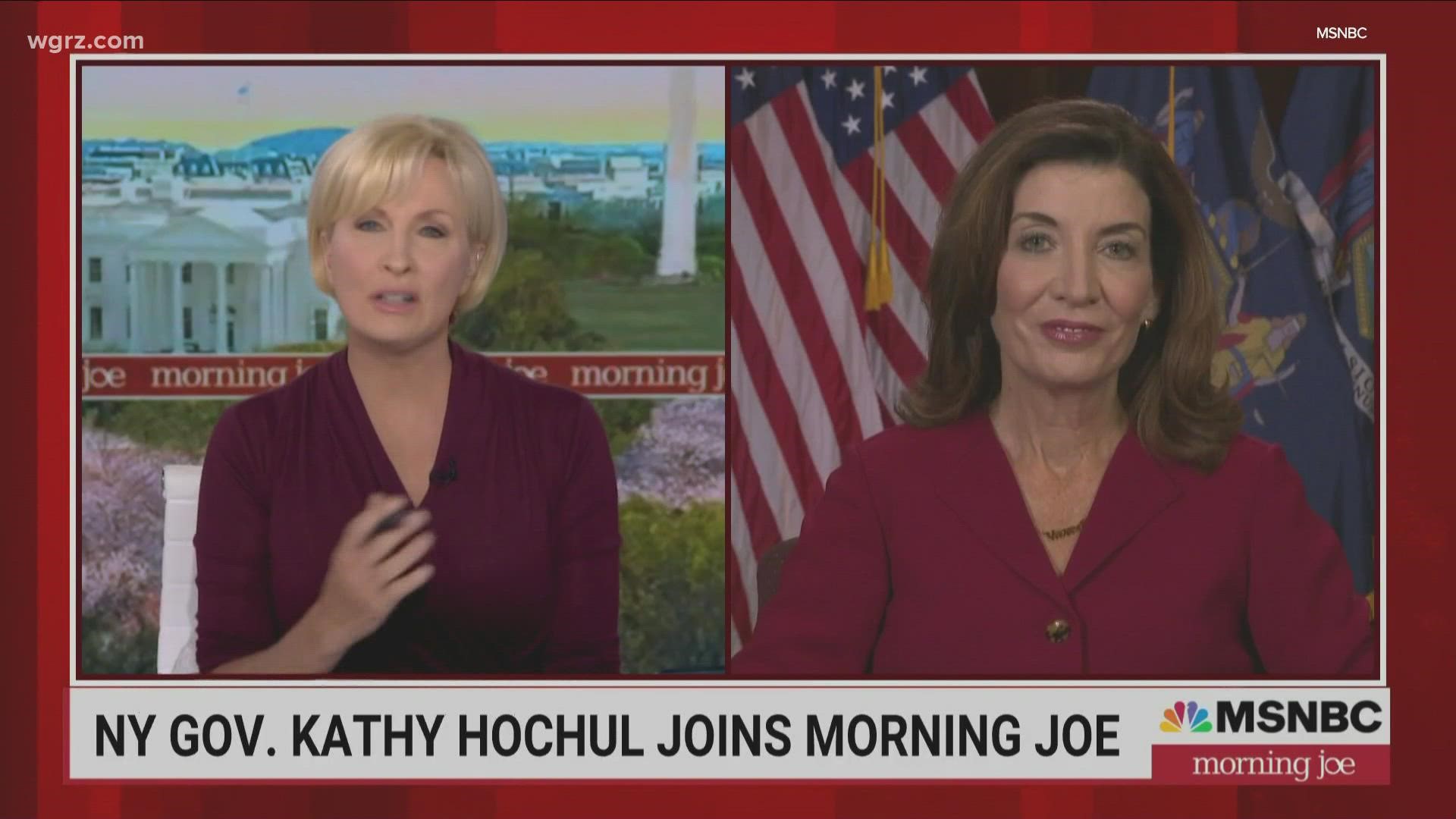 ALBANY, N.Y. — Gov. Kathy Hochul spent Wednesday morning introducing herself to the rest of the country.

She was on CBS, NPR and MSNBC.

While Hochul talked about her family background, and how that inspired her to go into public service, she also highlighted her top priorities again including getting COVID under control.

The governor also talked about how she's fired the people mentioned in the Attorney General's report who were complicit with the sexual harassment allegations made against former Gov. Andrew Cuomo. She says she's cleaned the house.

On MSNBC, the hosts asked Hochul if she's taking the same approach with the nursing home situation.

"I've asked for a 45-day period to be able to assemble my team, and I'm not going to be replacing people when they're in the middle of a pandemic on this day because I have so much to do to protect New Yorkers, and we're not anywhere near where we need to be, but I'll be taking an approach that's very different. Transparency. Starting just today, we're now releasing more data than had been released before publicly so people know the nursing home deaths and the hospital deaths are consistent with what's being displayed by the CDC. There's just a lot of things that weren't happening, and I'm going to make them happen," Hochul said.

She went on to say transparency isn't hard, you just have to get the information out there and address it.

This includes a zero-tolerance policy for workplace harassment. She was asked by several media outlets about the dynamic between herself and the former governor.

"I determined early on that the Governor has his own way and I had my way. It's no secret that we were not close for the last seven years. We actually run separately for Governor and Lt. Governor in the primaries, so that all being said, everyone knew that. Well, what I've done as Lt. Governor is taking the messages, and learning what other people are doing all around the state. I've been to all 62 counties every year, so I spent very little time in the rooms where this whole culture was festering," Hochul said.

On Tuesday, the Governor announced a universal mask requirement in all schools in New York State. That's for all public and private schools.

She's also starting back-to-school COVID testing programs and is looking into potential options for mandatory vaccines for school employees. She talked about how she's making those policy decisions, and what her leadership style is like.

"There's just some things in life that I call no-brainers, but I did consult. My approach is to consult with people who are involved in something that is going to affect them. I met with the leadership of our state unions, the school boards, school superintendents, school administrators, various immigrant groups, and all the stakeholders I could think of. I did a call with them before I even took office. I got their opinions, but I'm decisive. Give me the date. Give me the input. Talk to Dr. Fauci. This makes sense for New Yorkers, and I'll take the heat. I've been, you get elected as a Democrat in the most Republican district in the State of New York a decade ago, I've been in the line of fire a long time, so, okay. I believe this is right because it's gonna protect our children and protect the school environment. That's all I need to know," Hochul said.

Governor Hochul also mentioned that she's talked with New York City Mayor Bill de Blasio about the vaccine requirement for staff members in all New York City schools. She says she thinks that makes sense and that he talked to her beforehand about it. De Blasio and the former Governor famously did not get along.

And it appears Governor Hochul has made her decision about who will be the next Lieutenant Governor, her old job. The Associated Press is reporting that State Senator Brian Benjamin, a Democrat from New York City is her choice. Hochul's office announced late this afternoon that she will be making a special announcement with him Thursday at 1 p.m.