Trooper Gallagher was hit by a vehicle in December 2017 when he stopped to help another driver who had broken down. He died on March 26, 2021. 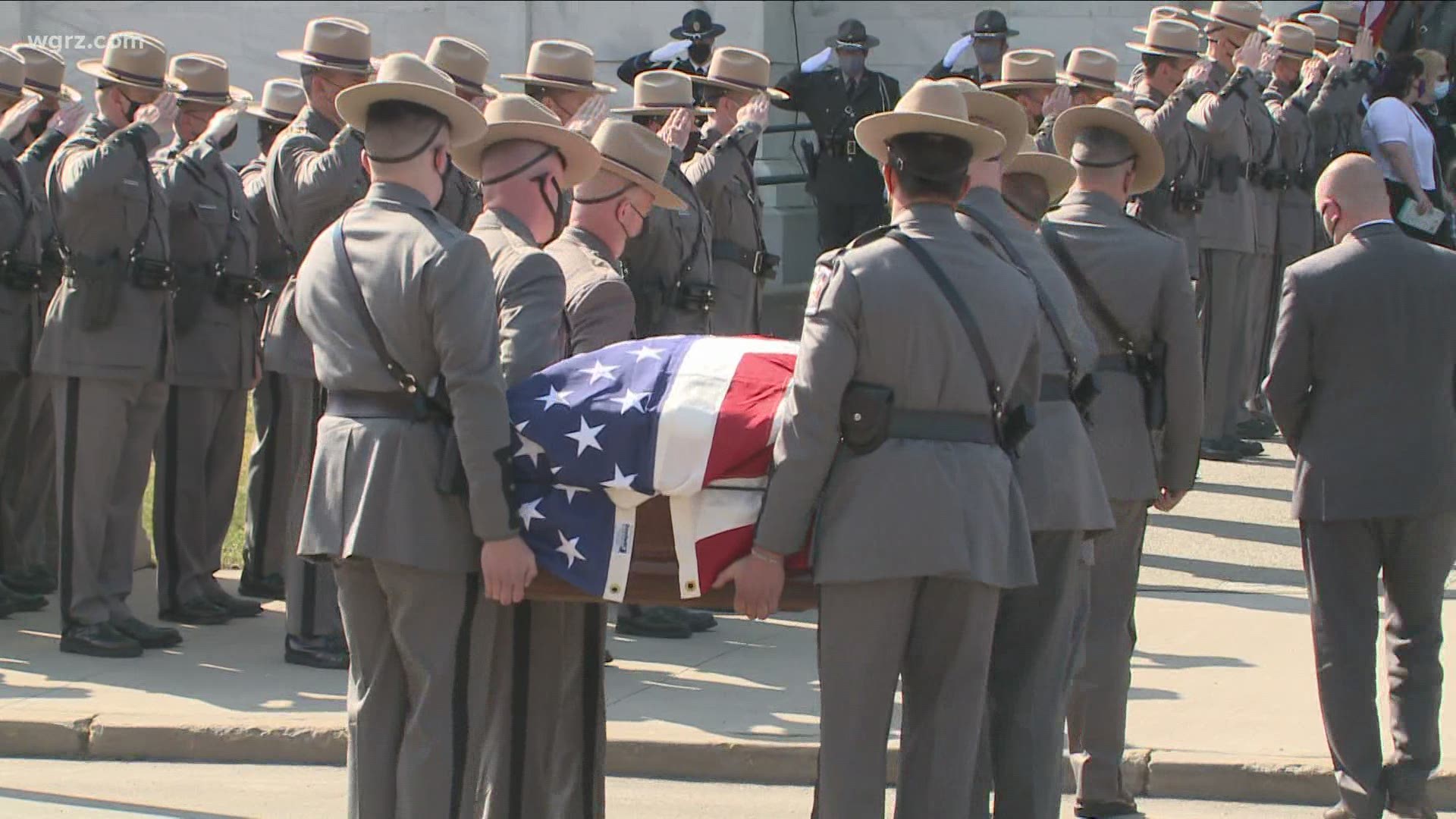 He died March 26, 2021 — more than three years after he was hit by a distracted driver while helping a stranded motorist on Long Island. He is survived by his wife, two children, parents, sister and brothers.

The funeral was held at 10:30 a.m. at Our Lady of Victory National Shrine and Basilica in Lackawanna.

Visitations were held last week on Long Island and Tuesday in Orchard Park.

Trooper Gallagher, 38, was hit on an overpass leading to the Long Island Expressway near Brentwood on December 18, 2017.

State Police say Trooper Gallagher had stopped to help a motorist who had broken down. He was setting up emergency flares in the road when he was hit.

He suffered a traumatic brain injury and had been living at a nursing home.

Trooper Gallagher is originally from South Buffalo and later lived in West Seneca. He joined the State Police in 2014.

Thank you to everyone, first responders and New Yorkers, who helped us escort Trooper Joseph Gallagher from Long Island and home to Buffalo where he will be laid to rest on Wednesday. pic.twitter.com/6vm5mhLEDR

"Joe was one of those guys that was loved by everyone," said Major George Mohl with the New York State Police. "He was a team player. Every day he'd come in, he had the motivation to get the other guys riled up, head out into the field, and he was assigned to the Interstate 95 corridor, which runs at that particular location, runs from the Bronx to the Connecticut state line. Very, very busy and very dangerous highway. He was out there every single day."

He was most recently assigned to Troop L (SP Brentwood), which covers Nassau and Suffolk counties. He also worked in Troop T (Thruway) and Troop F.

He was well-liked by his colleagues and earned a Trooper of the Year award in 2015 for his outstanding performance.

"When I got to Troop L approximately a year ago, Joe had been at the nursing home for over two years at that point, and I could see how it had affected all of the members that worked with Joe at the Brentwood barracks out in Suffolk County. A lot of hearts were hurt as a result, and I hope that the family and our members can find some peace with Joe being laid to rest today," said Major Mohl.

Acting Superintendent of the New York State Police, Kevin Bruen, also talked with the media on Wednesday. He said that it's important community members understand that New York State Troopers are willing to help them even at the potential cost of their own life.

A family member created a GoFundMe page to raise money for two organizations in honor of Trooper Gallagher's memory: the Signal 30 Benefit Fund and the Save the Sullivans campaign.