Kenneth Walker, a volunteer firefighter in North Tonawanda found a racist and threatening letter in his mailbox at home on Monday. 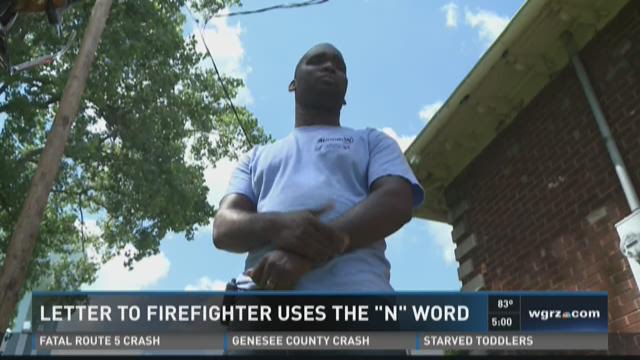 NORTH TONAWANDA, N.Y. -- Kenneth Walker, a volunteer firefighter in North Tonawanda, received a racist and threatening letter in his mailbox at home on Monday. The letter uses the N-word in reference to Walker who happens to be the only African-American in the city's fire department.

Kenneth Walker, 28, showed the letter to Two On Your Side's Claudine Ewing. It says "N-word are not allowed to be firefighters" and "no one wants you in this city."

Walker has reported the incident to his supervisor and the North Tonawanda police department.

The letter pressures Walker, 28, to resign from his position based on his race "or you will regret it."

"It shocked me," Walker said. "I didn't think that type of thing went on nowadays."

Walker said his wife with their two young children were home on Monday. The letter was not in an envelope and did not have an address on it, "like somebody just set it in my mailbox," Walker said.

The FBI is now looking into the case.

"The FBI has received a copy of the note left at Mr. Walker’s residence. Our office will conduct a review to determine what investigative steps are indicated under FBI policy with regard to federal jurisdiction," said the FBI in a statement.

Walker said in his two years of being a volunteer firefighter, he's never had any issue with his coworkers or in public.

The department gave Walker the option to stop responding to calls if he felt unsafe, but he is continuing to volunteer, Fire Chief Joseph Sikora said.

"I'm here to help people," Walker said. "That's what I do and it's sad that that person (who sent the note) can't deal with that."

Walker admits he was scared because he has a family, but he said: "I'm not going to be intimidated. I'm not going to change my habits of what I've been doing. I'm still going to be helpful in the community. I'm going to go on calls and hopefully this is just an isolated incident and if it turns out to be more, I'm sure that and confident that the North Tonawanda police department will handle it."

Walker is a member of Gratwick Hose Company. Robert Brennan, president of the company spoke highly of Walker. "He is a well- loved member and I was physically sickened by the letter," said Brennan.