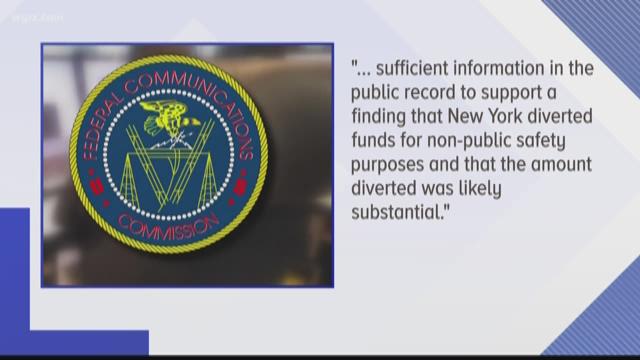 BUFFALO, N.Y. - Look at the bottom of your cell phone bill this month.

You'll notice a $1.20 fee under the state's public safety communications surcharge, a cost implemented in 1991 to help fund emergency services, police, and other important law enforcement initiatives in New York. The problem, however, is that not all of your money ends up in the realm of public safety.

That was the basis of a strongly-worded editorial written by two FCC commissioners in The Hill earlier this month, accusing states like New York of "stealing" 911 surcharge funds in order to fill other budget gaps.

Citing a report to Congress issued in late December, compiled with 2016 data, commissioners Michael O'Rielly and Jessica Rosenworcel wrote that a handful of states diverted close to $130 million away from public safety. Some states, including New York, did not even respond to the FCC's request for information in the 2016 report, which is the most up-to-date document available for the public.

"None of this is acceptable," they wrote. "The results of 9-1-1 fee diversion can be tragic. It can lead to understaffed calling centers, longer wait times in an emergency, and sluggish dispatch for public safety personnel. It also will slow the ability of 9-1-1 call centers to update their systems to support digital age technologies."

Like other states, New York has consistently diverted millions of dollars each year from public safety communications toward the General Fund, according to budget documents available on state government websites. The FCC reached the same conclusion, writing in its report to Congress that it found "sufficient information in the public record to support a finding that New York diverted

funds for non-public safety purposes and that the amount diverted was likely substantial."

During the course of 2 On Your Side's reporting over the last three years, representatives for the state and the governor have always insisted that the transfer of money to the General Fund is lawful and required by state statutes. They have also pointed out that the money in the General Fund can help fund grants for local 911 center improvements, although it's up to the individual counties to apply for those funds.

Some lawmakers haven't been so keen on the practice, though, especially because local counties often complain about not receiving their share of surcharge money to fund 911 center improvements. For example, in 2014, Erie County received only $220,000 in surcharge money from the state, despite customers paying $8.8 million in surcharges on their cell phone bills that year. County officials were not available on Monday to provide more recent data.

Bipartisan bills in both the Assembly and Senate have circulated for years to fix the problem.

State Senator Patrick Gallivan (R-Elma), the former sheriff of Erie County, co-sponsors a bill that would direct 58 percent of the surcharge revenue to local counties, with the rest of the money going toward State Police, an emergency services loan fund and "other uses."

The point of the bill, Gallivan says, is to give local emergency operations more support by ending the diversion practices and giving the counties more control of the money.

"It's frustrating," Gallivan said in a phone interview. "Consumers pay the fee on their bill to support 911 systems, and that's where the money should go. The state should not be sweeping any portion of it into the General Fund."

The press office for the state's Department of Budget did not respond to requests for comment on Monday.

Gallivan said this issue will be on the agenda during 2019 budget discussions early this year.