Struggling farmers fear being plowed under by increased costs which will pose a disadvantage in competing with farms outside of New York. 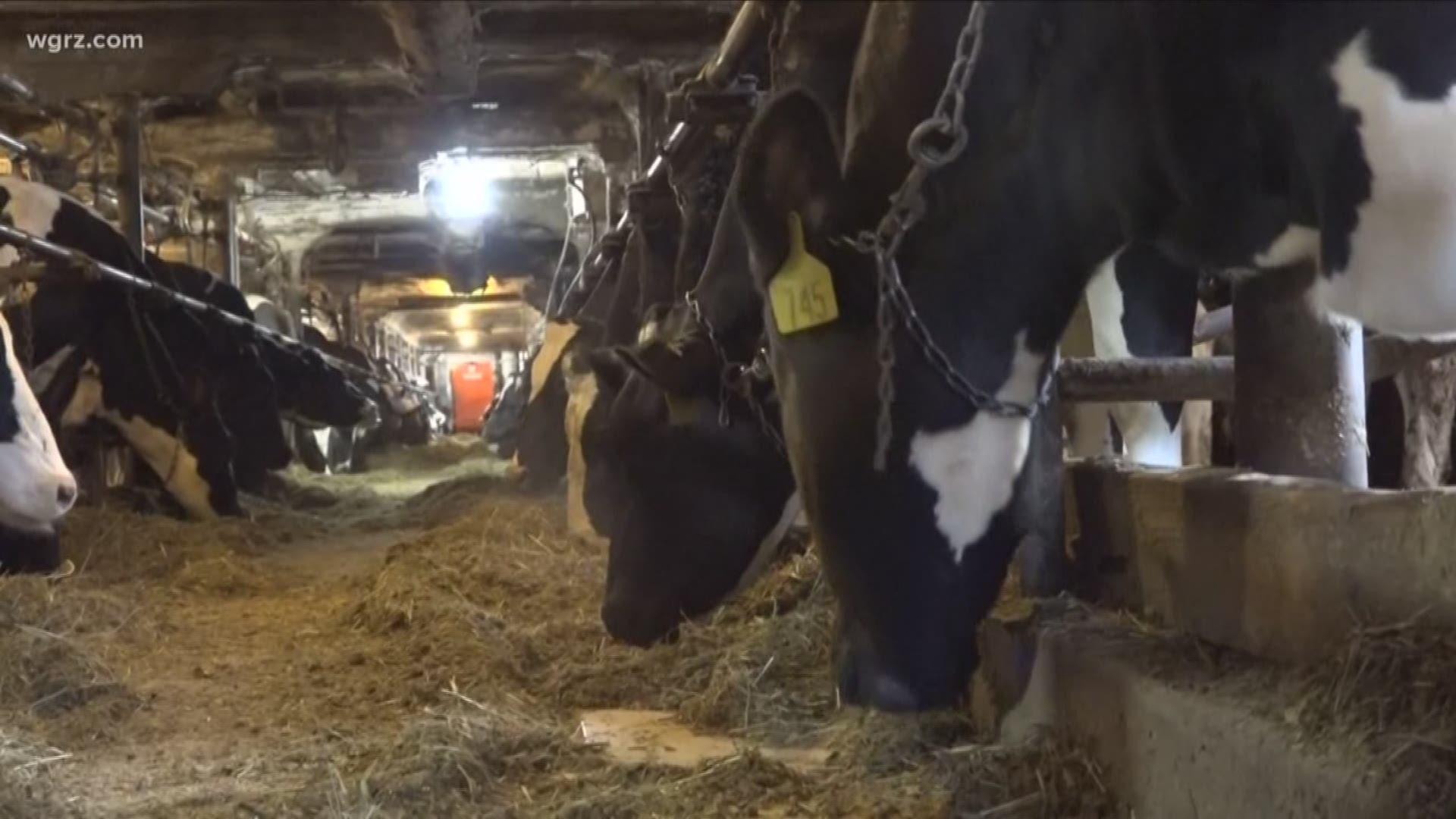 BUFFALO, N.Y. — Having unsuccessfully fought against its passage, New York's farmers now say they will push to amend a controversial bill, which will drastically change labor laws for farm workers—laws which farmers say will threaten their very livelihoods.

The law will now give New York farm workers -for the first time- the right to unionize, and to pay overtime. It mandates at least one day off per week, despite the need for round the clock care of livestock or for flexibility in scheduling, in an industry dependent on weather and time sensitivity from planting to harvest.

Overtime will kick in for farm workers once they have worked for 60 hours in a week, or if they work on their designated day of rest—even if they haven’t accumulated 60 hours.

“It could rain all week and there could be very little hours worked, but you’d still have to pay overtime for working on Sunday if it's sunny out,” said NYS Sen. Chris Jacobs (R-Buffalo) who voted against the bill.

Another addition was the creation of an appointed farm wage board with authority to lower the threshold back to 40 hours as early as next year, which is also raising concern among farmers.

"This may be the last straw,” said Jacobs. “It could most definitely be the death knell to the farms in our region. Farmers are petrified at the prospects of what this bill will do."

The bill was sponsored in both houses of the legislature by democrats whose districts are in New York City.

Farmers Fear Being Plowed Under

Farm workers will also be eligible for unemployment insurance and workers compensation. All of it, according to the New York Farm Bureau, will add an estimated $300 million in annual costs to New York's already struggling farmers.

New York currently has the highest rate of farm closures, and farmers say the new laws will likely increase the number.

Zittel Farms employees 130 workers, and figures it will add an additional $300,000 in annual labor costs, which already represents almost 50 percent of their overhead.

Many of the workers are from Mexico and for these workers Zittel pays the fees for their work visas, and for their transportation to come north.

“It costs us about $1,000 each just to bring them here,” said Zittel, who also pays for the cost of their housing once they arrive, and an hourly wage of just under $14 for their labor.

To stave off additional costs, farmers could grow less and lay off workers or limit the hours they allow employees to work.

However, Zittel says that’s the last thing his employees want, and if he were to limit them to 60 hours per week he is convinced many would not stay.

Hurting Those the Bill Intended to Help

“They’re here to make as much money as they can for five or six months…and even at 60 hours a week, some of them will leave because it’s not enough for them," Zittel said. "They want to work those hours so they can make their money and send it home or go home and see their families."

When a crop costs too much to produce, farmers won’t farm anymore according to Zittel, which will take away not only the harvest bonuses often paid to farm workers, but also the work itself, driving those workers to other states or to Canada whose farms compete directly with New York’s.

Zittel scoffed at the assertion that his workers might somehow be exploited or abused, and called such statements as made by Cuomo “ignorant and naive."

“I don’t know how to answer that other than to say absolutely not," he said. "I’ve got guys who’ve worked for me for 30 years and they continue to come here and bring their family members here…they wouldn’t return if they were being exploited or abused."

Seeking To Amend a “Flawed” Law

Dubbed the “Farm Laborers Fair Practice Act," the measure was approved in a party-line vote, despite strong and wide opposition, according to Jacobs, from respected stakeholders like the New York Farm Bureau, Grow NY Farms, Farm Credit East, the National Federation of Independent Businesses and countless upstate and family owned farms.

“We negotiated in good faith with many majority lawmakers who were interested in hearing from those who would be directly impacted by the legislation,” said Grow NY Farms in a statement. “Political realities meant we had to come find a middle ground that was mutually beneficial. We thought we had achieved that goal with a bill that while posing significant challenges for a struggling Industry, it was a vast improvement than where we started. Unfortunately there were some flaws thrown into the legislation in the final days of this legislative session that made the bill unacceptable. Despite the passage of this flawed legislation, we have not given up on finding a way to fix those flaws.”

Agriculture remains New York State’s largest industry, but some are predicting that will change as a result of the new laws.

In advocating against passage of the legislation, Dale Stein, senior partner of Stein Farms in Genesee County said, “We’re at the point I think where this has the potential to be the single greatest economically devastating effect on agriculture in New York State in my lifetime.”