The Bills home opener is Sunday. New this year, sheriff's deputies will be ejecting people from the lots if they break tables. 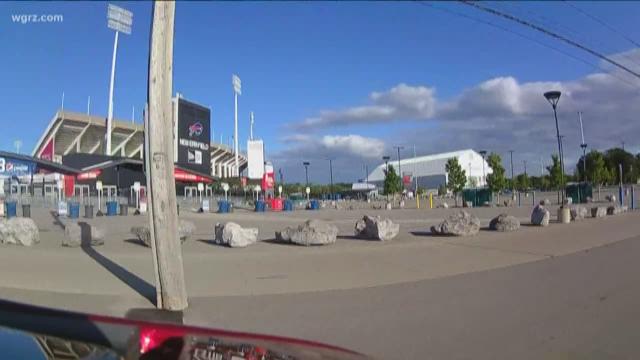 ORCHARD PARK, N.Y. - The Bills host the Chargers this Sunday at New Era Field for the home opener, and there are some important changes you need to know about before you head to the game.

Doty has only missed one home opener in the past 35 years. And, with only one home game this month, he's ready to make the most of it.

"Three years in a row the schedule hasn't been in our favor with three December games and stuff and as far as the camper and all that, but, you know, it is what it is," says Doty.

"We've been working on getting everything ready. We're going to have proper staff because we are expecting it to be packed," says Jenny Mirusso.

Mirusso is a bartender at O'Neill's Stadium Inn, and she says she is excited for the home opener, too. Mirusso says the bar is doing yoga and mimosas for the next away game since there won't be another home game until October.

"It's kind of a disappointment because everybody waits all year for the games, and then to give us one right in the beginning and not one for a while, it's kind of like a bad Christmas Day," says Mirusso.

And, it will be a bad day for Bills fans caught jumping through tables on Sunday. New this year, the Erie County Sheriff's Office says table slamming is not permitted in any stadium lots. Violators will be ejected and could face criminal charges.

You won't see anyone going through tables in the RV lot we visited next to the stadium. The crowd there isn't into that sort of thing. Photographer Jerry Gasser asked one fan to share his thoughts on the table issue.

"So, that table over there is probably safe," joked Gasser.

"It is definitely safe, yes,” said the fan.

Doty says he gets why the Erie County Sheriff's Office came up with the new policy.

“You want to make it a family atmosphere, this and that and everything else. I mean, I understand that. But as long as you don't disturb or interfere with anybody else, be as foolish as you want. Have an Uber home or somebody else drive, it's all good,” says Doty.

Also new this year, New Era Field is a certified sensory inclusion space meaning its staff has gotten special training and they'll be handing out sensory inclusion bags to people with sensory processing disorders like autism and PTSD.