Tours across the city highlighted development and looked at the east side as the next development opportunity. 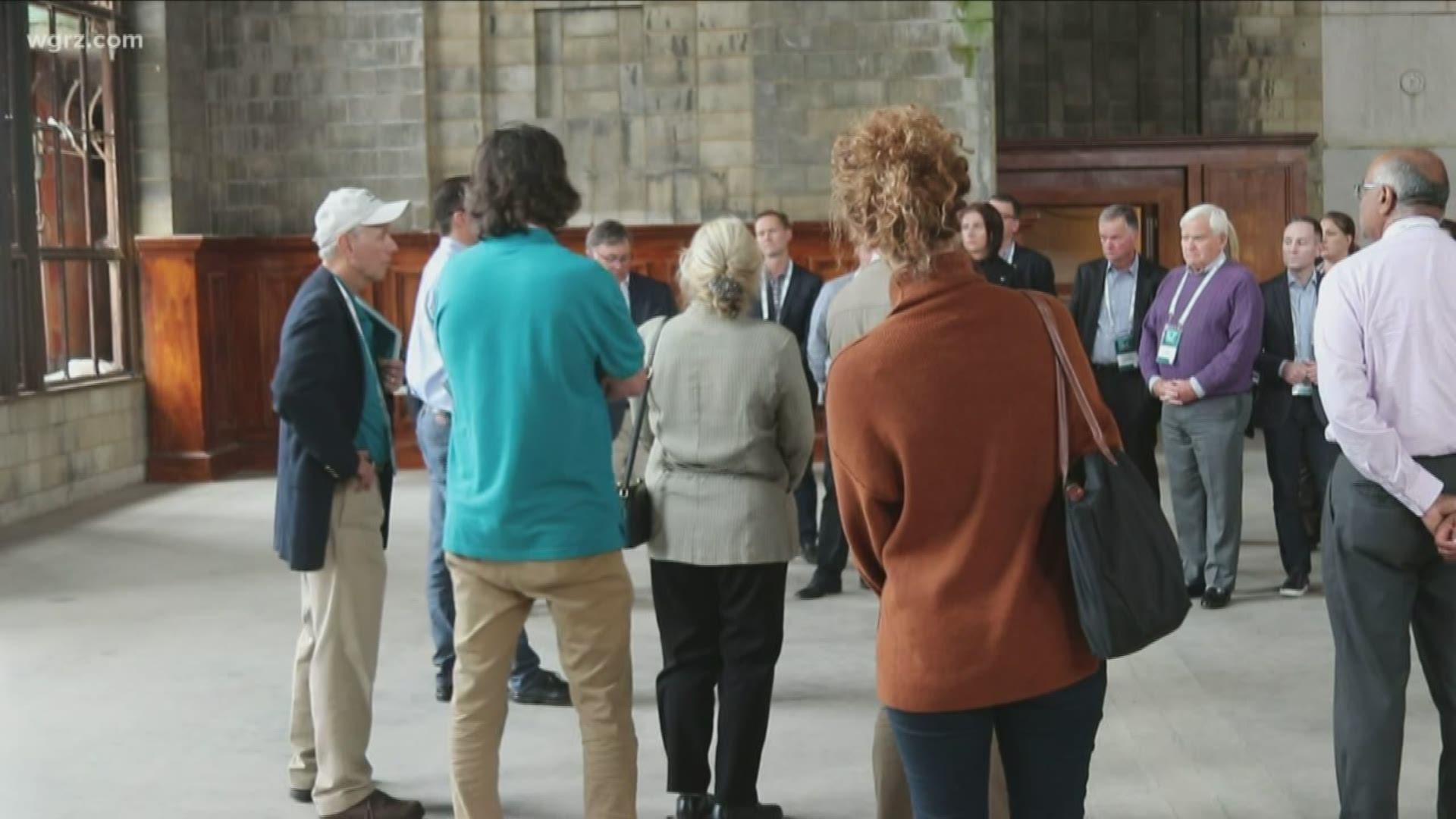 BUFFALO, N.Y. — Buffalo's population dropped from 357,000 in 1980 to 260,00 in 2010 mostly because an entire generation of high school and college graduates needed to find opportunity elsewhere.

"A lot of us left during the '80s when things were not great here," said Dennis Franczak, an expat living in Boston. "We had to leave to go get jobs somewhere else. Now people are realizing Buffalo's a great place work, a great place to raise a family, and they want to be part of it or help people grow it more."

Which is why Buffalo Business First organized the inaugural Buffalo Homecoming.

Homecomings aren't an original idea, Detroit had great success with their expat initiative when it started in 2014. To date, the Detroit Homecoming has generated $212 million in total investments, 20 publicly announced real estate investments, 12 new ventures, and 10 business relocations and expansions - according to its website.

The few dozen expats that returned to Buffalo for its first homecoming were greeted by a series of events and talks on the Buffalo Niagara Campus and Riverworks on Wednesday. Thursday's schedule was to get them into the neighborhoods and explore the recent growth pockets of the city have experienced.

Three tours were organized: A waterfront, an architectural, and an east side tour.

"I wanted to see what the gusto of Buffalo was right now," said Emmett Ogiony, a Williamsville native living in Philadelphia who works in the tech industry. "A lot of people I know in the Buffalo tech community said I need to check it out."

The east side tour kicked off by leaving Riverworks headed for the Northland Workforce Training Center, a nearly $100 million Buffalo Billion II project.

As the tour bus traveled up Michigan Ave and down Broadway, the chatter of remembrance filled the seats.

"I don't remember that, what was there before," said one expat, referring to the lot where the new Forge on Broadway apartments is being built.

Expats exited the bus at Northland Workforce Training Center and were given a tour and quick slideshow of facts and figures. Representatives from the University at Buffalo painted a picture of life in Buffalo's east side before and after state investment of $237 million (since 2011).

"The whole reason we exist is to create a workforce to fill the upcoming 20,000 jobs that will be needed for the manufacturing sector in WNY," said Stephen Tucker, President and CEO of the Northland center.

The expats toured the facility, led by Tucker and witnessed students working on CNC machines, lathes, and welding stations.

"We have to fend off some of the big-name manufacturers because they're trying to grab these kids before they even graduate," Tucker told the group of expats.

The group was abuzz with chatter again as they continued through the facility.

"I wish we had this when we were in school," one expat told another.

RELATED: Northland to Albright-Knox: 'Stick around'

The tour continued on to Harmac Medical Products on Bailey Ave where CEO John Somers led a tour through the medical manufacturing headquarters that has called Buffalo homes since 1981.

The tour eventually led to the company conference room where Somers gave an in-depth summary of the Bailey Green initiative that the company has been spearheading for over a decade.

"We want safety, we want jobs, we want fresh fruits, we want education," said Somer to the group.

The Bailey Green initiative has led to nearly 65 acres of park space, urban gardens, new bus stops, and quality of life improvement for the neighborhood.

"A woman pulled up to me in an old beat-up car along Bailey and rolled down the window. She yelled 'Hey You....thank you for what you've been doing, it looks great," Somer told the expats while fighting back emotions.

The tour ended with resounding applause for Somer and the work Harmac has been doing for the neighborhood.

"It's incredible to see companies giving back to the neighborhood like that, rather than bleeding it dry," an expat told Somer while leaving.

"I know the folks at Groundwork Market Garden," said Allison Weinberg, a Buffalo native now living in Seattle. "The work they've done and the support they've received, it seems like a really good place to invest."

The tour wrapped up in the concourse of the 271-foot symbol of the east side, the Central Terminal.

In awe of its insurmountable scale and rustic beauty many of the expats hadn't been inside the Terminal - having left Buffalo when it was boarded up, and decaying with every rain, wind and snow storm battering its exposed roof.

"I never really hung out on the east side when I was in high school," said Ogiony back on the bus. "I think the Central Terminal solidified my positive expectation about the east side and what can happen here. It confirms my want to come back home."

Returning home is exactly the desired outcome for the organizers and supporters of the Buffalo Homecoming. The event's goal was to target expats who could potentially return home, invest in businesses, property or other means and continue the momentum that has been seen over the last decade.

"I've already bought a business in Buffalo," said Franczak. "I'll be splitting my time between Boston and Buffalo now."

"I'm an occupational therapist," said Weinberg. "I'm working on starting a business for individuals with disabilities and I think there's a real opportunity for that in Buffalo"

Excitement among expats remains high as the Buffalo Homecoming wraps up, but the question remains: will they return and invest in their home?