Erie County explains efforts to allow taxpayers to prepay 2018 property taxes. They say there is no guarantee that the IRS will approve the deduction. 2 On Your Side asked the IRS about this. 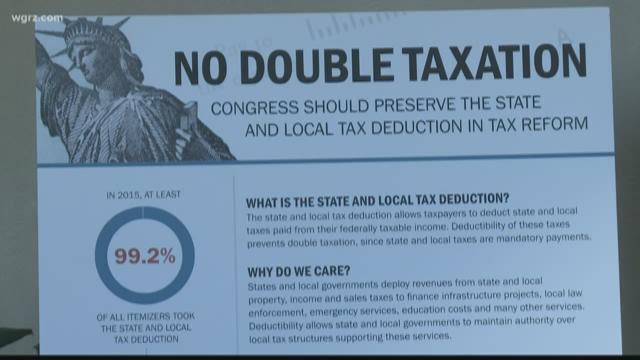 It's a phenomenon many tax collectors admit they never thought they'd see: people rushing to prepay their taxes. And local governments here in Western New York are scrambling to allow them to do so.

Wednesday, local news agencies heard from Erie County leaders for the first time about what they're doing to accommodate taxpayers wishing to prepay 2018 property taxes.

It's not often that you see the Erie County Executive standing shoulder to shoulder with Erie County Comptroller, Stephan Mychajliw, on issues. But they showed a united front on the execution of Governor Cuomo's Executive Order, which gives taxpayers the opportunity to pay both city and county 2018 property taxes before the new year when new tax law changes take effect.

"The Governor's Executive Order allowed us to expedite the process," Poloncarz explained, "but it did not change how taxes are normally collected."

"It wasn't an easy process," admits Mychajliw, referencing efforts of the Director of Real Property Tax Services. "Joe Maciejewski, a lot of his staff actually came in over the holiday, working off hours, to make sure that the system was in place here in Erie County...to at least have the option for tax payers to get this done."

It was last Wednesday, when Erie County issued the following press release stating the county tax law does not allow for pre-payment of 2018 county real property taxes:

Under New York State law, specifically the Erie County Tax Act, county property taxes do not legally become due and owing until the tax rolls are completed and a resulting lien is placed against the property as of January 1, 2018. Collectors and receivers cannot collect said property taxes until they are commanded to do so by a duly executed warrant delivered to the appropriate entities, which delivery does not take place until on or soon after January 1, 2018 in accordance with the Erie County Tax Act.

As such, there is no tax due and owing for 2018 at this time, and therefore there is no obligation against which payment may occur.

The Governor's Executive Order, announced just three days later, turned that all around.

If you itemize your deductions, and foresee paying more than $10,000 dollars in state and local taxes next year, prepaying at least a portion of your 2018 property taxes could be a good idea. But the only way to know for sure if it's the best idea for you, is to discuss your financial situation with a tax professional.

"If you have never itemized your deductions before on your income tax there probably isn't any reason for you to pre-pay your taxes," adds Poloncarz, "because you're not going to get a benefit if you've never itemized before. With the new tax rates and deductions that are going into effect of $24,000, it's doubtful if you need to itemize deductions in the future, you probably don't need to prepay your taxes."

Tuesday, Erie County scrambled to get all the necessary players in place, to issue tax warrants to all the cities and towns. It's something they usually have until the end of January to do. They got it done by 3pm on Tuesday.

The tax warrants show the total amount of taxes the municipality must collect for that year. Chris Fabian of EG Tax Service explains the tax warrant is essentially a bill, which allows allows cities and towns to accept pre-payments from tax payers.

The Amherst Town Clerk, Marjory Jaeger, tells 2 On Your Side they started collecting 2018 tax prepayments as soon as those tax warrants were in on Tuesday afternoon.

When the doors of the Amherst Municipal Building reopened at 8 am Wednesday morning, Jaeger says more than a dozen taxpayers were already there, waiting to pay. She reports more than 100 people submitted prepayments before noon.

Jaeger tells Channel 2 there are a number of people in her office that are on vacation. And typically, during high volume tax times, they hire additional staff members, "So, it's been very difficult to take care of folks walking in and to take care of the hundreds of phone calls"

Those residents of the City of buffalo wishing to submit a prepayment on 2018 county and city property taxes, should do so at Real Property Tax Services, on the 1st floor of the Rath Building. That is the only location in Erie County that is currently able to give exact numbers of what taxpayers owe for 2018.

All other taxpayers must go to municipal offices to pay county and local taxes. Some towns may have exact property tax bill amounts by now, but Maciejewski told reports at the press conference on Wednesday, most municipalities will not have exact figures. That means taxpayers will need to look at what they paid in 2017 and estimate their payment for 2018.

"We are getting them the numbers," explained Maciejewski. "As we prepare, as you can understand, preparing tax rolls and bills for 25 towns and three cities...you don't just do that all in one day. The process takes time."

The County Executive admits staffing at tax collection offices will be an issue because of the holidays, but he and the Comptroller assure tax payers that Real Property Tax Services at the Rath Building and the municipal offices will be open to accept prepayments Thursday and Friday.

"We're giving you the option," stressed Poloncarz, many times, "under the Governor's Executive Order and what we're doing in Erie County. But we make no guarantee that they will then allow that as a deduction for your 2017 tax return. That is up to the IRS...because you have this much higher amount for your state and local tax deduction and for the 2017 tax year. That might subject them to look at you and say 'Maybe we should audit this.' No guarantee, whatsoever. You may not receive a benefit because of this. They might say 'No, it's not deductible.' But we're giving people the option and we at least try."

2 On Your Side reached out to the IRS about this, and they sent us the following statement:

IRS Advisory: Prepaid Real Property Taxes May Be Deductible in 2017 if Assessed and Paid in 2017

The following examples illustrate these points.

Example 1: Assume County A assesses property tax on July 1, 2017 for the period July 1, 2017 – June 30, 2018. On July 31, 2017, County A sends notices to residents notifying them of the assessment and billing the property tax in two installments with the first installment due Sept. 30, 2017 and the second installment due Jan. 31, 2018. Assuming taxpayer has paid the first installment in 2017, the taxpayer may choose to pay the second installment on Dec. 31, 2017, and may claim a deduction for this prepayment on the taxpayer's 2017 return.

The IRS reminds taxpayers that a number of provisions remain available this week that could affect 2017 tax bills. Time remains to make charitable donations. See IR-17-191 for more information. The deadline to make contributions for individual retirement accounts - which can be used by some taxpayers on 2017 tax returns - is the April 2018 tax deadline.

Fabian tells us this essentially means if a county and municipality issues a bill before 2018, and a taxpayer pays it, the payment is tax deductible. He reiterated that the tax warrants from the county, signed and sent to the cities and towns, are bills.